Running for Office as an Engineer 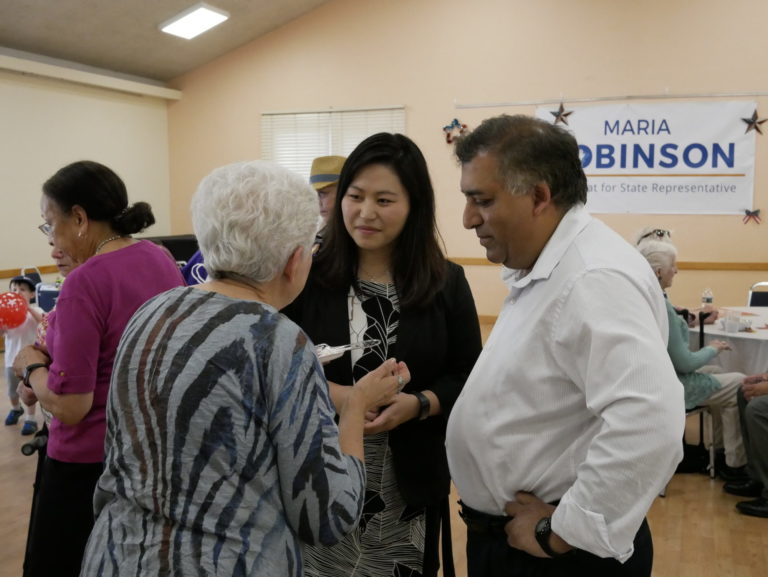 Maria Robinson talks to voters.
Our "Stories from the field" series shares the experiences of engineers and scientists who are making a difference in their communities.
Share this article

Maria Robinson uses her background in chemical engineering as a policy expert for a clean energy trade association. She spoke to us about running as a write-in candidate for state representative in Framingham, Massachusetts.

YD: How did you become interested in public service?

Robinson: It goes back to my days at MIT. I was planning on becoming a chemical engineer and working for a pharmaceutical company or something like that after graduation. Then I took a class on energy and the environment and was fascinated by the topic. My professor got me involved with the MIT in D.C. internship program. It’s a chance for us to get exposure to policy making and for policy makers to get exposure to scientists and engineers. I’ve been interested in government ever since.

YD: What was your next step in getting more engaged?

Robinson: I’ve been involved for the past couple years with our local Democratic town committee, and I helped different candidates. This past year, I graduated from Emerge Massachusetts, which trains women to run for office. It gave me the confidence that I could actually do this and run a campaign.

YD: Why did you decide to run for state representative?

Robinson: This is a really unusual race because our state representative passed away unexpectedly, so we don’t have a candidate on the ballot. I knew I was ready to run for something and had done a lot of preparation; I just didn’t expect it to happen this quickly. But I jumped at the opportunity and have been running ever since.

YD: What was it like to transition from being a volunteer to a candidate?

Robinson: It’s been an interesting experience to have the focus turn to you as an individual as opposed to the issues. I’m less comfortable with the attention on me. Just knocking on doors and handing over a piece of literature with my picture definitely takes getting used to.

But I know what the issues are and I’m ready from day one to fight for our community. Many people in STEM going into campaigns feel like they need to be on top of all of the topics. Having a strong amount of preparation increases my confidence in myself.

YD: Does your engineering background inform your approach to policy?

Robinson: Absolutely. Everything I do is very data driven. I’m interested in seeing the numbers. I want to see the budget. There really needs to be evidence backing up any policy-related decision that I make.

YD: Has anything surprised you during this campaign?

Robinson: My background as an engineer is a real asset when campaigning. People are very interested in having a more diverse legislature with a variety of backgrounds and not just lawyers and career politicians in the legislature.

YD: What advice do you have for scientists and engineers who want to get more involved in their communities?

Robinson: Find a place where you want to volunteer. I care about public libraries and literacy so I joined a couple of our local library boards. There are so many opportunities for people to get involved; it’s just a matter of going out and asking. There are a bunch of appointed positions in every town and city, and often there aren’t enough candidates qualified for those. It’s a great opportunity, especially for those who are interested in environmental or conservation issues.

YD: Why should scientists and engineers care about engaging at the local level?

Robinson: Usually scientists and engineers pay attention to the federal level because there’s a lot more reporting, data, and information about what’s happening. Reading the local newspaper and making sure you’re informed of what’s going on in your own neighborhood and your own city is incredibly important.

Local leaders are the ones making decisions that will impact your life. Maybe it’s not research funding from the NIH, but there’s still a lot of impact in terms of zoning and what kinds of businesses are being brought to your local area, and this does impact the lives of scientists and engineers.

Engineers & Scientists Acting Locally (ESAL) is a non-advocacy, non-political organization. The information in this post is for general informational purposes and does not imply an endorsement by ESAL for any political candidates, businesses, or organizations mentioned herein.
Published: 09/23/18
Updated: 09/14/22