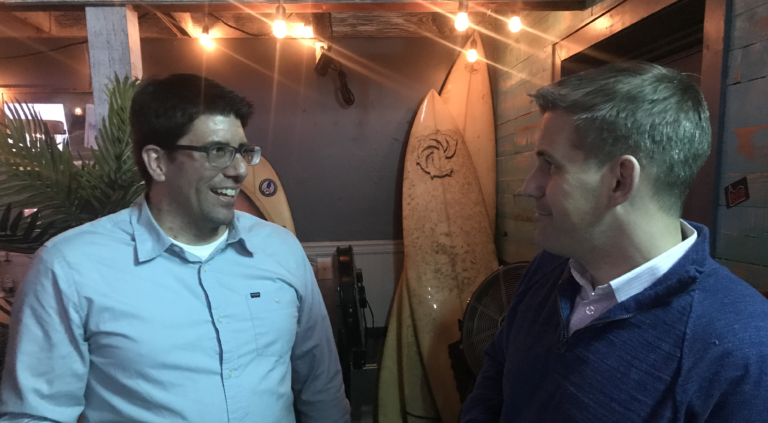 Mike Fisher with congressional candidate Josh Welle.
Our "Stories from the field" series shares the experiences of engineers and scientists who are making a difference in their communities.
Share this article

A decade ago, Mike Fisher could be found in the laboratory working 12 hour days as a molecular biologist. But after receiving his Ph.D. from Princeton University in 2009 and completing a post-doctoral fellowship in California, he moved to Red Bank, a vibrant town of 12,000 residents along the Jersey Shore. When the local environmental commission had an opening, Fisher accepted an appointment to the tight-knit group. The position became a springboard for his later efforts on a congressional campaign and his current job at the Federation of American Scientists, a science and technology nonprofit organization in D.C.

CK: Tell us a little about the commission.

Fisher: The Red Bank Environmental Commission is an advisory body that meets about twice a month, serving the citizens of Red Bank by advising the Borough Council on issues related to environmental concerns. We had about 10 people who were active on the commission and participated in different initiatives.

CK: How did you become involved?

Fisher: I got a job working at the Liberty Science Center in Jersey City and I was commuting from Red Bank up to Jersey City because I wanted to live on the shore. I became really interested in local politics during the 2016 election cycle, so I reached out to the local Democratic Party and they connected me with the Red Bank Democrats. I had some discussions with them about what getting more involved could look like. There was going to be a vacancy on the commission, and it appeared to be a good fit given my scientific background. From their perspective, it might have been like, “oh, wow, here’s this person who has some capacity to contribute and wants to get involved.”

CK: What’s your role at the commission?

Fisher: The main things I ended up taking part in were the evaluations of proposed developments. This was a major component of what we did because Red Bank has been experiencing a surge in development. It’s a small town in New Jersey that is very close to the beach, maybe 10 or 15 minutes away by driving. We’re also on the North Jersey coast train line, so it’s only about an hour to get into New York City. The area is drawing a lot of young adults and younger families who like that accessibility into the City and the public transit hub, with a nice amount of culture. It’s an old town and this development is putting a strain on the existing water and sewage infrastructure. There was actually an identified bloom of human-related fecal coliform in the Navesink River. There was an effort to determine the source of runoff that was causing the bloom, like possibly a weakness in the water and sewage pipe system. We are also really working hard to help with the development of a couple of parks in town, trying to make sure that they were developed in a responsible, sustainable fashion, with the landscape’s natural features.

CK: Can you tell a story about when your work with the commission has paid off

Fisher: We were able to help at meetings to get the community’s input on what should happen in the parks. That input ended up affecting, or at least being taken into consideration, by the borough council when they were deciding who would end up doing the park design and construction. Getting exposure to these different constituencies was definitely a good experience and a good reminder that when you’re dealing with a large community, everyone is going to have a different take on the best way to go about something. You’re really not going to get to completely satisfy everybody.

CK: What have you learned from being on the commission?

Fisher: I would say that, acting at the local level, it’s always hard to make change. It takes a lot of work, but I was surprised at how easy it is to at least have input into what's going on. It’s just a matter of scale. It was really rewarding to be involved in these discussions and to help push along these initiatives that were going to end up benefiting the community where I lived. It was really fun to get to know everybody and engage in intense discussions where we ultimately all have the same goal of improving the quality of life of Red Bank residents.

CK: What advice do you have for other scientists or engineers looking to get involved locally?

Fisher: Even if you don’t have the time to be a member of a commission, you can always help out and volunteer a couple hours every week, and even that will make a really huge difference. If you are of the mind to work as part of a commission, it might be possible to work with your academic department to have that be part of the service requirement that’s often part of departmental requirements.

Engineers & Scientists Acting Locally (ESAL) is a non-advocacy, non-political organization. The information in this post is for general informational purposes and does not imply an endorsement by ESAL for any political candidates, businesses, or organizations mentioned herein.
Published: 04/28/19
Updated: 08/16/22