Swimming Against the Current: Innovation in Water Technology and Policy 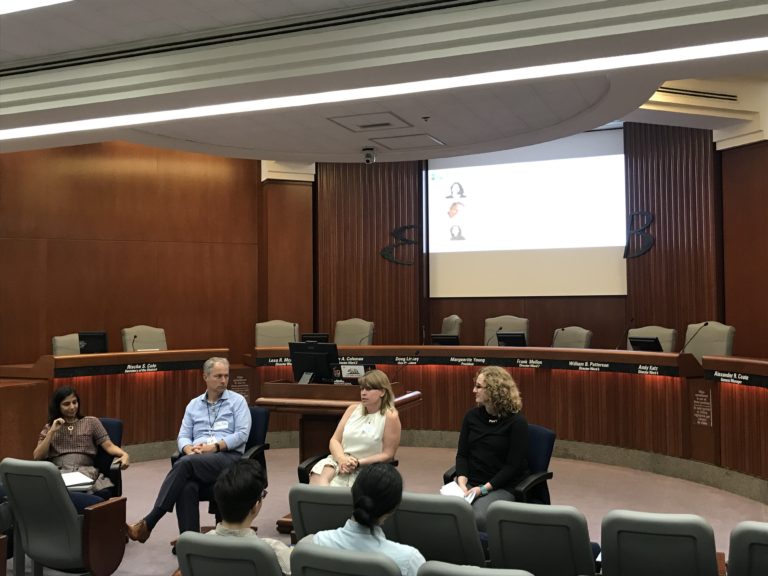 Roundtable discussion in the EBMUD Board Room. From left to right: Arti Garg, Peter Fiske, Christine Boyle, and Amy Nagengast.
Share this article

On September 12, ESAL hosted a roundtable discussion on local water policy in Oakland, California. The event featured a panel of San Francisco Bay Area leaders who contribute to innovation in water-related technologies and policy decision making. Subscribe to our newsletter for notifications of future events.

While water flows through almost every aspect of modern life, it is a resource that we often take for granted. There are over 52,000 distinct public drinking water systems in the United States. However these systems usually go unnoticed -- surveys show that only 25 percent of Bay Area respondents can accurately identify where their water comes from. In order for local governments to meet sustainability and climate goals, it is critical to understand not only the sources of our water, but how and where it is used.

Water is regulated by a number of federal laws such as the Safe Drinking Water Act and the Clean Water Act, however the implementation of these laws occurs at the local level. Christine Boyle, founder and CEO of Valor Water Analytics, explained this can lead to unequal water access in socioeconomically disadvantaged communities. “1.6 million Americans today do not have access to sanitation or water,” she said. Across the country, local governments continue to struggle to figure out how to pay for water for those who cannot afford it. In the Bay Area, East Bay Municipal Utilities District (EBMUD) has made strides towards this, recently passing a resolution to reduce the number of customers whose water is cut off for nonpayment.

Though many cannot afford it, compared to other developed nations, people in the United States actually pay some of the lowest water rates. Because the prices are so low, it is challenging for utilities to fund a transition to new ways to treat, supply, and use water. “We’re seeing innovation happening in places where it’s a matter of life and death, like a lot of developing countries,'' said Boyle. Our water treatment technology is currently built for large centralized systems, which simply doesn’t work for rapid growth. Instead, many cities around the world are switching to distributed, point-of-use treatment systems.

Nonetheless, aging water systems across the country, coupled with climate change, are forcing local governments to adapt. “When public utilities think about how to invest in the future, they cannot rely on extrapolation from the past,” explained Peter Fiske, director of the Water-Energy Resilience Research Institute at Lawrence Berkeley National Laboratory. The costs of overhauling existing water infrastructure are not trivial. In regions like the Bay Area, it takes $2.5 million to replace a single mile of water pipe infrastructure. This presents an opportunity for scientists and engineers to engage: “It’s an awesome time to be in the water and wastewater and power arenas because there's a lot of ways to start influencing different projects and to start encouraging new technologies,” said Amy Nagengast, District 7 appointee and secretary of the San Francisco Public Utilities Commission's Citizens' Advisory Committee.

While many aspiring scientists and engineers may look to city council or school boards to get involved in policy, local water boards offer another exciting opportunity to apply technical skills to some of the challenges the water sector faces today. Anyone can show up to their local utility board meeting to offer public comments or chat privately with their district representative. Furthermore, beyond the more familiar arenas of drinking and waste water, sectors such as agriculture and industry, where most of our water is actually used, face their own unique challenges and will require equally unique solutions. In the same way that earlier innovation has allowed us to deliver water over 170 miles, from Hetch Hetchy Reservoir to a tap in San Francisco, future innovation in technology and policy will be necessary to shape the future of water for the next generation.

Boards and Commissions
ESAL Events
Engineers & Scientists Acting Locally (ESAL) is a non-advocacy, non-political organization. The information in this post is for general informational purposes and does not imply an endorsement by ESAL for any political candidates, businesses, or organizations mentioned herein.
Published: 09/21/19
Updated: 09/14/22

Expert Guidance: The Connecticut Academy of Science and Engineering
New York Academy of Sciences: NY Scientist’s Varied Career Leads Back to the Big Apple and Climate Challenges
Local Government Perspective: Responding to COVID
Developing Climate Policy on a Municipal Advisory Board
Envisioning Local Engagement: ESAL at the AAAS 2020 Annual Meeting
Communicating Science: Responding to COVID
All Politics Are Local
‘Running for office takes a lot of guts’: 314 Action and the case for electing scientists to local government
Community-driven Solutions to Rural Water Needs
Building More Resilient Communities in the Face of Climate Change