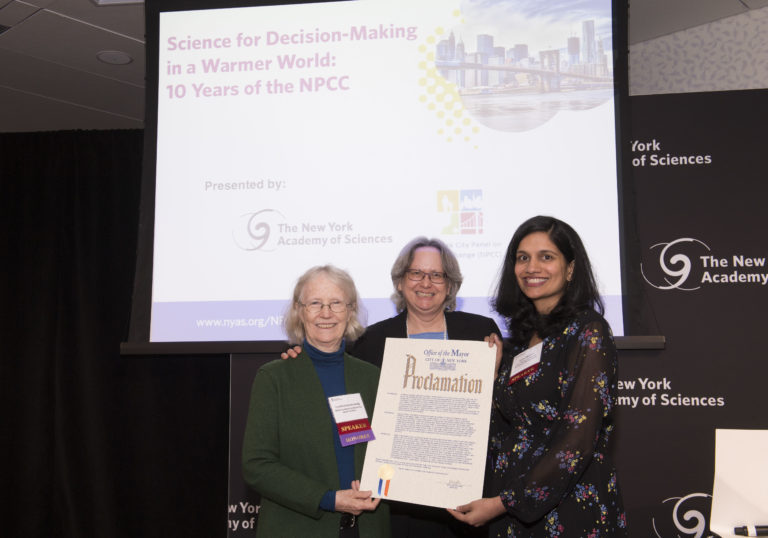 Jennifer Costley launched her career as a chemical physicist but has worked in fields as disparate as systems engineering, finance, and consulting. For the past three years, Costley has been director of physical science, sustainability, and engineering at the New York Academy of Sciences, in the same city where she earned a Ph.D. from Columbia University in 1983. During her tenure, climate change and adaptation planning have become increasingly pivotal topics. In March 2019, for example, Mayor de Blasio announced a $10 billion dollar effort to extend the Manhattan shoreline as scientists expect hurricanes and flooding to intensify with the warming climate. In the spirit of these efforts, the Academy recently hosted a “Science for Decision-Making in a Warmer World: 10 Years of the NPCC” summit to discuss the findings from the New York City Panel on Climate Change (NPCC), which the Academy publishes in their journal, Annals. Costley spoke to ESAL about the collaboration between the Academy and the NPCC on their milestone anniversary.

CK: What does your role entail at the New York Academy of Sciences?

Costley: I bring together multidisciplinary groups to take on some big problems, whether they're problems around the sustainable development goals, or issues around, for example, sustainable clothing or even machine learning and natural language processing. It's pretty broad. I like that it allows me to get to know those topics at a reasonable level. I don't have to become an expert, but I’m able to facilitate the dialogue and conversations so people can come together to really move forward on the research, and to provide a platform for that collaboration to occur, which is really nice. We typically take on some of the biggest challenges or problems that we can find.

CK: How has the Academy been involved in climate-related science leading up to the recent climate summit, which discussed the latest findings from the NPCC?

Costley: You have to understand the history of the relationship between NPCC and the Academy – it goes back 10 years. The city commissioned the NPCC to bring together scientists who could develop the research and findings that were needed to underpin decision-making. The Academy's role was to provide a platform for the publication of those findings and be able to distribute them out to the world. There were three rounds of NPCC panels and each concluded by holding a conference and issuing a document containing the findings. Those findings appeared in a special publication that was part of our Annals series.

CK: What was the purpose of the Science for Decision-Making in a Warmer World: 10 Years of the NPCC summit?

Costley: One of the intents was to say, “you know, how has this worked out?” Because oftentimes you have science published out there and you're not really sure if it's being impactful. But in this case there’s such a close connection between the chartering of the work and how it's used. So the summit was both an opportunity to get together to talk about what's been done and talk about the new findings, as well as what's been happening around this approach in other cities and areas. It was also the celebration of the NPCC and the ten years of history.

CK: What are some of the most pressing climate-related problems for New York City?

Costley: It's fairly complex, as I've been learning. We think a lot about sea level rise as being one of the key aspects because it will continue to have an impact, and not just in storm surge events or large weather events. The ongoing rise of the sea level will mean that certain areas in the city will become more difficult to live in. Any major weather event that occurs in the New York metro area can exasperate the vulnerabilities of our underlying infrastructure. The other thing that’s happening now with the NPCC is that they put sociological science into a similar rigorous framework as the climate science itself. So we have measurable metrics. To me that's a nice evolution.

CK: What’s the importance of grassroots efforts in global challenges like climate change?

Costley: I'll talk about it from a slightly different perspective. I'm on the board of directors for the Waterfront Alliance here in New York, which brings not just science but also local on-the-ground perspective into decision-making processes within the city, by including all kinds of groups and individuals. They have an opportunity to have input into decision-making since the Alliance encourages robust stakeholder engagement. For us in the city, it's fairly straightforward to be able to do that when there are organizations like the Waterfront Alliance. And neighborhood groups can directly provide data about what's happening in their neighborhood.

Engineers & Scientists Acting Locally (ESAL) is a non-advocacy, non-political organization. The information in this post is for general informational purposes and does not imply an endorsement by ESAL for any political candidates, businesses, or organizations mentioned herein.
Published: 04/14/19
Updated: 08/16/22