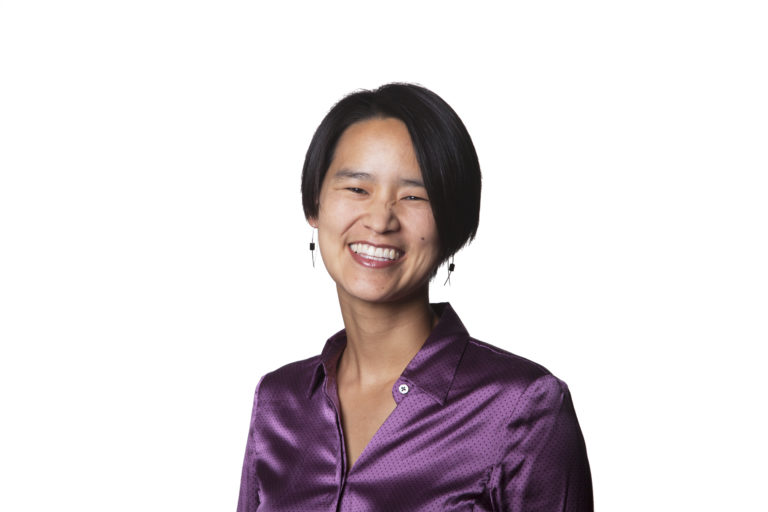 Audrey Lee is a nationally recognized expert on energy regulation and policy.
Our "Stories from the field" series shares the experiences of engineers and scientists who are making a difference in their communities.
Share this article

Audrey Lee, who earned a Ph.D. in electrical engineering from Princeton University in 2006, has spent the past decade in a diverse suite of science policy positions. She has helped translate energy policy at the highest levels of US government, advised the president of the California Public Utilities Commission (CPUC), and served on the BART Environmental Justice Commission, becoming a nationally-recognized expert on energy regulation and policy. At Sunrun, she continues to work closely with policymakers, bringing residential energy solutions like solar and batteries to market to meet environmental and policy goals.

Lee: I did an internship at the Federation of American Scientists, which works at the intersection between science and public policy. That inspired me to go into policy. When I returned to Princeton, I was not only more determined to finish my Ph.D., but also determined take public policy courses.

CK: You earned your doctorate in 2006, and in 2005 you had already started working at the Department of Energy (DOE) as a senior economist. How did you use your STEM education to inform your role?

Lee: I applied to become a Presidential Management Fellow, which is a great program for people in graduate school considering public policy. And through that I got a full-time position at the Department of Energy. It was a great fit for my engineering background because it focused on energy modeling. After coming out of a Ph.D. where my thesis was quite narrow, it was refreshing to work on a model of the entire U.S. and global energy system. I was able to zoom out and have a system-level view. It was also great to be at the intersection between quantitative modeling and policymaking.

CK: You stayed at the DOE through 2011. What was involved in your job?

Lee: I worked with people who built and ran energy models at the Brookhaven National Lab, but I also worked with the President’s Administration, his appointees, and leaders at the DOE. My role was to translate the Administration’s energy policy goals and figure out how to model them. So I would be at that interface thinking, ‘if the administration wanted to do a renewable fuel standard for biofuels, how would that policy actually be modeled?’ After getting results, I would interpret them for the policymakers. For example, these are the implications if you set the standard at this level, or this could potentially reduce gasoline prices and result in this much savings.

The Clean Energy Standard, which President Obama announced in the 2011 State of the Union, was based on modeling that we did. Obama proposed that 80 percent of America’s electricity will come from clean energy sources by 2035. We modeled the implications of setting the standard at those levels on that timeline. For bureaucrats, it’s a big deal to make it into the State of the Union speech.

CK: In 2011, you became advisor to the president of CPUC. What were the biggest differences between working at the federal versus state level?

Lee: A lot of DOE’s work is funding energy technology research and development, but my role there was a little more unique because I was doing policy analysis. In contrast, the public utilities commission at the state level is much more of a regulatory body. It has jurisdiction over utilities, like PG&E, so it can have a greater impact as opposed to only providing analysis and recommendations. At the federal level it can be difficult to make policy changes due to the diversity of policy positions across the country. Getting something through Congress is much more difficult, whereas in California, especially on energy and environmental issues, the starting position is much more progressive. It was actually quite refreshing to come to an environment where I didn’t have to argue that climate change is human-caused. Being able to work on some of the most progressive policies in the country was very rewarding.

CK: Was there a policy that you worked on that was particularly meaningful for you?

Lee: There were a few cases that really used my background in science and engineering. One was on smart grid and energy data, and in particular, energy data access. Utilities have access to very important data in terms of customers’ usage of electricity, the programs they participate in, if they have solar panels on their roofs, etc. Data is extremely valuable in terms of gaining insights and being able to create products to meet our environmental or energy goals.

CK: You were on the BART Environmental Justice policy advisory commission from 2013 to 2014. How did you get involved in this committee?

Lee: I applied to be part of a program called the Boards and Commissions Leadership Institute, which I recommend to people interested in joining commissions. We met every Saturday for four hours and received training about the different boards that you can be on and the problems they’re facing. Everything from housing and climate justice to transportation policy.

For example, this was around the time when the Oakland airport connector was being built. There was discussion about whether there should be extra stops to serve the employees who work along that route, or if it would be something that was built just for airport passengers. There were important equity issues being raised with the use of public funding.

CK: What are some of the challenges associated with this kind of work?

Lee: First, how do you engage with so many different stakeholders who hold different perspectives? How do you make a decision that you think is the most fair and the most beneficial to society? Having a science and engineering background, you can take a more quantitative, analytical route. Also, a lot of decisions involve technology. How do you find the right level of regulation to protect the public, while also allowing new technology to benefit the public as well?

It’s challenging because you may never really know if you’ve made the right decision. Sometimes you find out ten years later about unintended consequences, or you might be surprised that it worked out really well. For example, the CPUC is responsible for regulating rideshare companies like Lyft and Uber. When these companies and their software platform technology first entered the market, the CPUC acted to establish regulations to protect public safety, like driver background checks, while allowing this new technology to offer services to customers. Now, one could argue that this service is a valuable part of our economy.

CK: What values drive your involvement in projects that affect real people?

Lee: Transparency. I started out in the Department of Energy under the Bush Administration. I did not vote for President Bush, but I felt comfortable working there because the people of the United States of America had elected him. So I was serving the people. I believe that as an elected official, it’s important to be transparent about your positions, so people know what they’re voting for.

Also curiosity. Being a policy advisor is similar to science and engineering in that you have a mindset of being curious and wanting to understand all the issues and stakeholder perspectives. With an engineering mindset, you can find creative policy solutions that benefit society.

In my current role at Sunrun, in the private sector, that transparency, curiosity, and creativity are just as important. It’s about being transparent to our customers and explaining how solar and batteries work. It’s about exploring new paradigms for how we can create a more resilient and clean electricity grid. And finally, it’s about creative products and services to bring to the market to create the energy future we want.

Engineers & Scientists Acting Locally (ESAL) is a non-advocacy, non-political organization. The information in this post is for general informational purposes and does not imply an endorsement by ESAL for any political candidates, businesses, or organizations mentioned herein.
Published: 02/24/19
Updated: 06/27/22