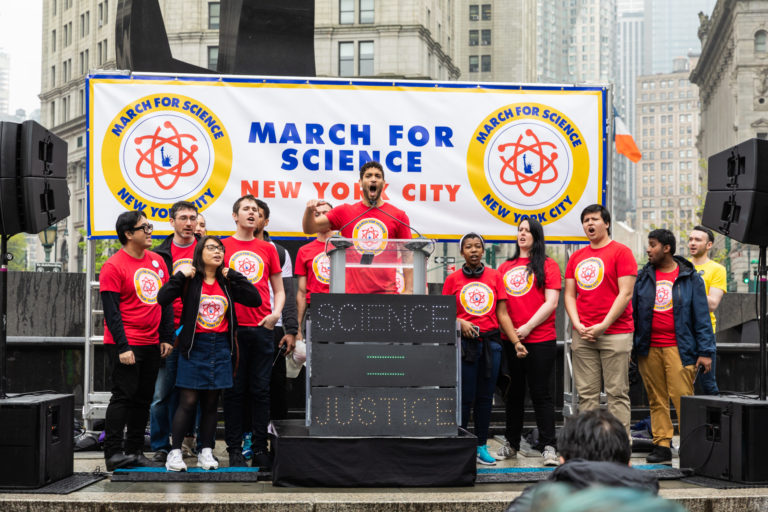 Leading a chant with the March for Science NYC team on the stage of the March for Science flagship event in Foley Square in 2019. Photocredit: Diego Rojas Rey @diego_rojasrey (instagram)
Our "Stories from the field" series shares the experiences of engineers and scientists who are making a difference in their communities.
Share this article

Omar Gowayed studied materials science at Ohio State, then earned his Ph.D. in the NYU Tandon School of Engineering in 2021. In his doctoral work, he explored how light and matter interact by shooting high-powered lasers at aqueous solutions. The lasers serve as “molecular tweezers,” causing materials to phase change and separate. Gowayed is also the founder of the Urban Food Lab at NYU, supported by government and NYU grants, where students work in multidisciplinary teams on vertical farming and related projects. With chemical engineer Ingrid Paredes, Gowayed co-chairs March for Science New York City. ESAL interviewed Gowayed about his interesting mix of chemistry, urban farming, and science advocacy.

DR: As a kid, did you expect to become a materials chemist?

Gowayed: Yes and no. I grew up in a STEM-heavy environment. My father was a polymer and fiber engineer at Auburn University, so I was exposed to materials science early. I have memories of going to my dad’s lab after school to see the mill and flywheel equipment. He played a prank where he’d give me a carbon fiber strand to hold, which made for itchy hands! My dad was also active in advocating for STEM education, like hosting a STEM Day for kids to get exposure to engineering fields. But starting in high school my rebellion was to decide to become a mechanical engineer.

DR: Yet you ended up majoring in materials science. How did that come about?

Gowayed: I applied to mechanical engineering programs for college and didn’t get in because my grades were mediocre. But then I took a materials science course, loved it, and switched my intended major. As a materials science major at Ohio State, I planned to do something positive for the planet by going into solar photovoltaics. I had always been an activist, and that seemed like a way to combine my science interests with activism.

DR: So, you were an activist even before college?

Gowayed: Yes, my parents left totalitarian Egypt and were excited to raise us in a democracy. We lived in Alabama, where I went to protests with them against the Iraq War and later to interfaith gatherings in response to the Islamophobia provoked by 9/11. Living in Alabama, Ohio, West Virginia, and later Indiana was difficult in terms of feeling tokenized as an Arab. People would assume that what I did was “what Egyptians do.” I felt pressure to represent a whole people, not just myself, Omar. People would ask me “Where are you from?” If I said “Alabama,” they’d ask, “No, where are you really from? 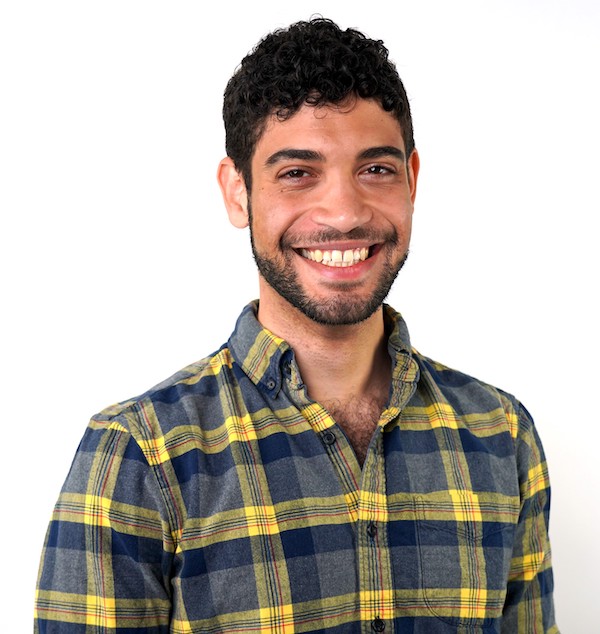 DR: In terms of your Arab identity, have you found New York City to be different from Alabama?

Gowayed: Yes, in Alabama I felt like I had to work twice as hard to compete, to just be considered equal. For the first time at NYU, I truly feel like my efforts gain me recognition in a collaborative environment. My Arab identity is no longer the sole focus of people’s interactions with me. It’s been freeing. Science is actually an escape for me, a place where I can just focus on problem-solving. You connect pieces of information that others have researched, find the gaps, and try to fill in the missing pieces. In the process, you might discover ten more missing pieces, so it’s like a puzzle that keeps expanding, but never ends. I could not have guessed, though, that I’d be working with lasers.

DR: How did you end up doing the laser-based research you do now?

Gowayed: For graduate school, I applied to solar lab groups, but was not accepted into any of them. People encouraged me to apply to other lab groups, such as a laser chemistry group. And I took a course in electronic materials, which I absolutely fell in love with. I just kept studying and everything suddenly clicked and it became an easy class for me. I am fascinated by how electrons and photons interact with materials. It turns out I like working with lasers even more than the solar technology. It’s exciting. Yet, unintentionally, I also keep coming back to thinking about what’s better for the planet. 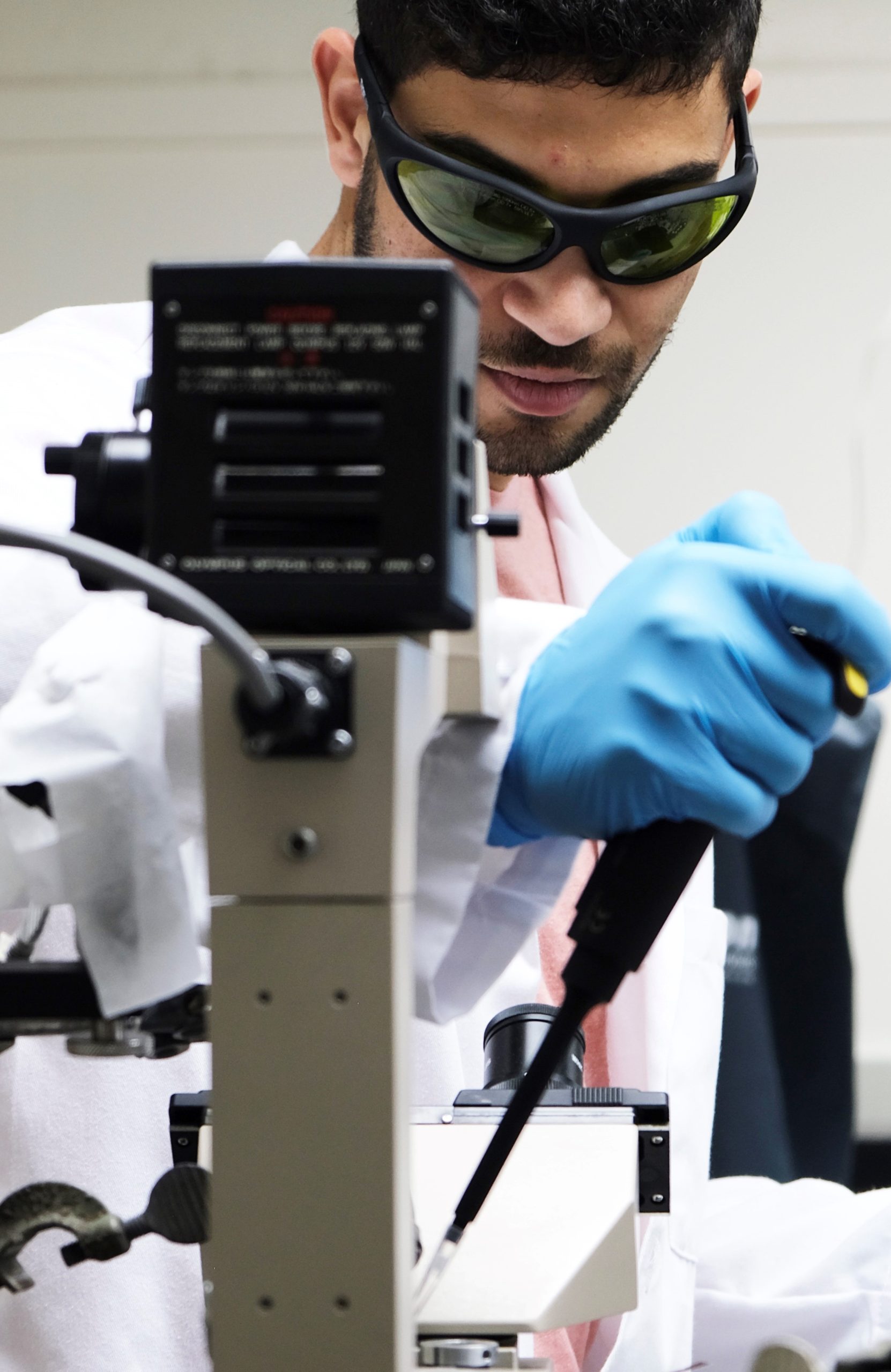 Pipetting aqueous glycine solution into a cell to be manipulated with optical tweezers to form a laser-induced phase-separated droplet.
Photocredit: Jorene He

DR: Does that explain your co-chairing the March for Science?

Gowayed: Yes, I do my best to fight for evidence-based policies. People want a better world, but there is a disconnect between the desires and the science. For example, people wish that healthcare was better, yet overlook the multiple studies that show that Medicare for all would save money and lives. The March for Science is to help people connect those dots. There’s a wealth of research that can inform our goals, whether for reduced crime, better education, or safer climate. We just need for people to listen to the science and invest in the changes. But my involvement in activities other than research is not just about helping the planet.

Gowayed: I’ve never found it productive to sit down on just one project for hours on end. My community work gives me breaks. I think you can get trapped in a cycle where you keep pushing yourself, but suffer diminishing returns. My GPA has always been mediocre. I make sure to get above a 3.0, then invest in being part of a broader community. For my postdoc, I won a National Academies of Sciences Fellowship. One of the reviewers said that what really stood out was my being one of the top 500 climate activists. The rest – grades, research, publications – was just adequate. And my work in the Urban Food Lab also made for a nice escape from research during graduate school.

Gowayed: A student friend and I applied for a prototyping fund to build the Urban Food Lab, which is a vertical garden. Once the system was going, I would go tend to plants while my laser was powering up. Checking the plants, checking the fish, maybe grabbing a tomato, that was a perfect break. After my second year, I also used the Urban Food Lab as a hub for trying my hand at teaching. I created a research class where students design and run small experiments, manage the materials budgets, analyze data, make presentations, and all the other aspects of research.

DR: What made you want to teach that class?

Gowayed: I wasn’t sure if I wanted to end up a professor or working in a national lab, so it helped me see what teaching was like. And I want students to see that their science is useful in more ways than they can imagine. Besides an introduction to research and design, it offers a way for students to think about sustainability, materials life cycles, and science in their community. For extra credit, my students could go to a protest, volunteer, register people to vote, or do something for climate and sustainability. All of my students did something in the community. And, I hadn’t announced it yet, but the Urban Food Lab recently won an EPA People, Prosperity, and the Planet grant that emerged from one of my student’s projects. 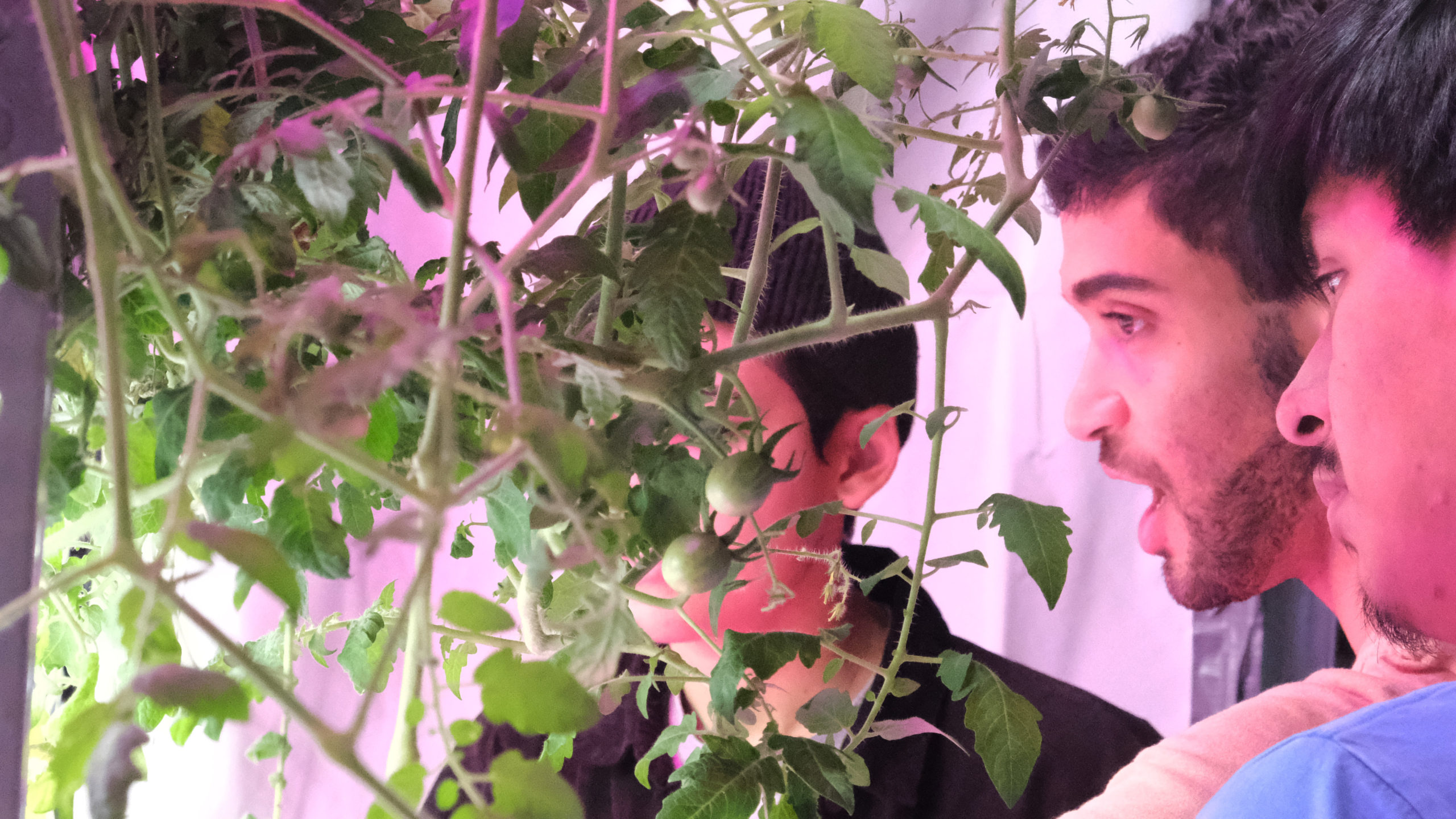 DR: What was the student project?

Gowayed: The student wanted to investigate how to filter out polystyrene plastics from water. We discovered that when you feed earthworms with packaging foam, along with grass, there are toxic effects on growth of plants, such as kale. So, while worms can compost polystyrene and release valuable carbon, toxic ingredients may limit the utility. This federal grant will fund a year-long research project with Dr. Silverman in Engineering about how to compost plastic and food waste for use as nutrients for plants, such as in vertical farms.

DR: Congratulations on the grant. I think it’s fair to say that between looking at how materials respond to laser light, tending to experiments in a vertical garden system, and advocating for science-based policy, you have a full plate.

Gowayed: True. Science can be nonstop work, but I am also getting my hands dirty and involved in local and global change. Other than funding, the scientific community doesn’t tend to want to do day-to-day activism. But now that we have a membership structure in place for the March for Science, for example, we are shifting to more activism. The pandemic, by forcing us to do virtual programming, has fostered more global connection. We are connecting to satellite efforts all over the country and are part of a global movement for recognition of the value of science in policymaking.

Engineers & Scientists Acting Locally (ESAL) is a non-advocacy, non-political organization. The information in this post is for general informational purposes and does not imply an endorsement by ESAL for any political candidates, businesses, or organizations mentioned herein.
Published: 07/25/21
Updated: 09/14/22