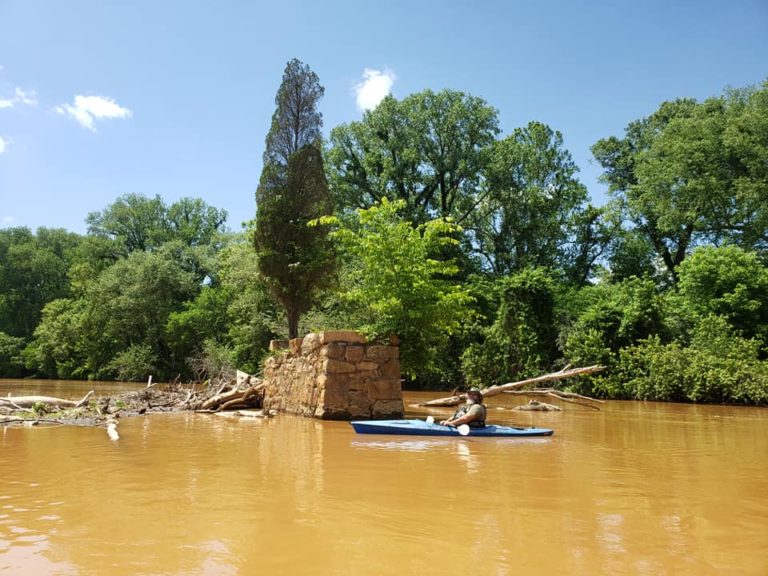 Although originally hailing from Boone, North Carolina, Brian Fannon spent 11 formative years as a biologist in Alaskan marine fisheries before returning to his home state to pursue a graduate education. Earning a PhD in geography in 2015, Fannon studied the effects of river geomorphology on the landscape. His background positioned him perfectly to step into the role of “Riverkeeper” at Yadkin Riverkeeper, a non-profit based in Winston-Salem. Field scientists like Fannon monitor, advocate for, and protect the health of the 7,000 square mile Yadkin-Pee Dee River Basin and the 200-mile-long Yadkin-Pee Dee River. Fannon spoke with ESAL about the intersection of management and ecology as Yadkin’s Riverkeeper.

CK: What’s unique about Yadkin-Pee Dee River Basin in terms of its ecology and management history?

Fannon: In one word: poor. The management has been poor. Yadkin River was settled fairly early in the colonial period, the early- to mid-1700’s with European-style agriculture. They farmed in the only way they knew, and their practices created a tremendous amount of erosion. A lot of this land has loose soils, and the heavy plowing churned it up. The Pee Dee River and most of the Piedmont Rivers, which were documented as being fairly clear even after heavy rains, developed a huge legacy of sediment load, and that load is still working its way through the river. Heavy agriculture, unfortunately, was continued up until the late 1800’s with cotton and tobacco. It didn't really change until the Dust Bowl era when farming changed to be a little less damaging. But at that point it had 150 years’ worth of sediment in it, and it'll probably take 150 years to let that move through the system and come out.

It’s referred to locally as the Mighty Muddy Yadkin. In the late 1800s, a comment was made that was too thick to drink and too thin to plow. There’s a lot of legacy sediment working through there and that's impacted the form of the river and also the ecology of the river. A lot of the focus on management now is on preventing more sediment from coming in and also from nutrient overloading from agricultural and urban runoff.

CK: How many people rely on the Yadkin River Basin? 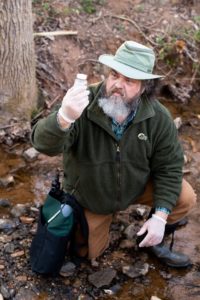 Fannon: Somewhere between 800,000 and a million people get their drinking water from it. A lot of industry relies on it. Agriculture relies on the water for irrigation and there's a growing industry in river sports, especially in some of the rural counties that can use any industry they can get. Thirty years ago, the Yadkin was a pretty messy river to be in and there wasn't a lot of kayaking or canoeing. Now, on a summer day, you can watch 150 people putting in boats at some of the access areas.

CK: What is Yadkin Riverkeeper and what are its major goals?

Fannon: Our slogan is: drinkable, fishable, swimmable water for everyone. And our goal is to maintain high water quality in the Yadkin River Basin. Yadkin Riverkeeper works to address threats to the river posed by long-term chemical contamination, coal ash storage, extreme weather events, climate change, and sprawl, while redoubling our efforts to protect the Yadkin River’s vulnerable floodplains, tributaries, and river access points.

CK: How does it achieve those goals?

Fannon: We work to encourage best management practices with agriculture. We work with cities on runoff control and sanitary sewer systems. And we occasionally are involved in lawsuits. Those are not our first choice, but sometimes that's our only choice involving industry to prevent contamination.

Right now, one of our big emerging issues are the PFAS and PFOS compounds, which are known as “forever” chemicals. There’s probably another legacy issue that will grow out of that even though those are generally only 20 or 30 years old. Given that they don't degrade, they are something that we're watching become a problem. One of the other river basins had a DuPont plant that produced a lot of these PFAS compounds. And that was upstream of the city of Wilmington’s drinking water supply. They started testing the water and found that the levels are extremely high and that triggered more testing across the state. We found them to some degree almost everywhere we've looked.

CK: What are some successful past projects that have been completed with Yadkin?

Fannon: We were involved with the statewide push with other Riverkeepers and other groups to have coal ash pits cleaned up. Early this year, the state announced that they had come to an agreement that Duke Power was actually going to clean them up and remove them rather than cap them. That was a huge shared success. I don't think anybody expected a ruling that would have called for excavating all of them, so it was a happy day.

This problem with coal ash pits goes back probably 15 years, even before the creation of this organization in North Carolina. It was really brought to light about 10 years ago when one of the coal ash ponds blew out a side and drained into the Dan River, and flooded the river with coal ash. There was some cleanup, but in the end Duke Energy said that it simply wasn't practical or feasible to actually clean it all up. That drove a lot of interest in the issue because basically they had admitted that if there was a spill, there wasn't much they could do about it.

CK: Can you tell me about past or current projects your team is undertaking?

Fannon: One project that we just finished was working with a grant from the National Fish and Wildlife Foundation. We spent about four years putting together what we call a “Roadmap to a Cleaner Yadkin,” which pinpoints some of the most vulnerable areas and some of the areas that are the easiest to fix in terms of runoff control. This work has been distributed to quite a few areas, including the State, and has gotten really good feedback. The goal was to look at the problem, then come up with some realistic solutions to it -- some places to start. This will hopefully be incorporated into the new basin-wide plan, which should be out sometime next year from the State. So that's the one that we just finished that I'm also very proud of.

An ongoing project that will probably never go away is nutrient loading, primarily from runoff. We have a huge number of concentrated animal feeding operations in this basin. We have just under a thousand chicken farms with anywhere from two to 16 houses, with each house containing about 86,000 chickens over the course of the year. North Carolina is a huge chicken producer, which means we also are a huge chicken litter producer, and all of that has to go somewhere. That's an ongoing project with no end in sight, trying to balance environmental needs with economies in rural counties. It is not an easy thing to do.

CK: What future opportunities for improved management does Yadkin have? And what challenges?

Fannon: Better regulation of our chicken litter. Right now there are very few regulations in North Carolina, as far as with what happens with the litter. It's deemed to be basically a fertilizer range spread on farm fields. Unfortunately, once it rains, the bacteria level and the nutrient level just shoots through the roof. There needs to be a set of guidelines as far as how it's spread, when it's spread, and the amount of spread because in some cases we see it basically just being spread on hayfields to get rid of it. There are also long-term consequences because the chicken litter is high in copper and zinc. We're starting to see a few farm fields in the upper watershed showing signs of heavy metal poisoning and poor growth. So I would like to get better state regulation, but I’d settle for any regulation at this point because that’s probably the single biggest issue where we could have a difference in water quality.

Engineers & Scientists Acting Locally (ESAL) is a non-advocacy, non-political organization. The information in this post is for general informational purposes and does not imply an endorsement by ESAL for any political candidates, businesses, or organizations mentioned herein.
Published: 11/8/20
Updated: 08/16/22