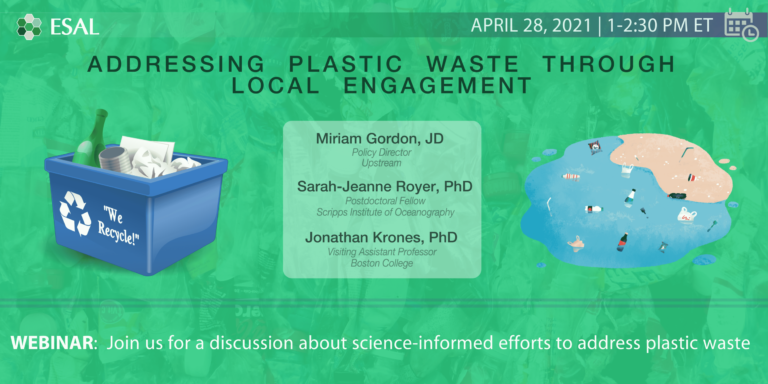 One garbage truck of plastic is discarded into the ocean every minute. This was one of the alarming facts shared in the opening presentation for ESAL’s panel event, Addressing Plastic Waste Through Local Engagement,’ which was held on Tuesday April 28. The event was organized by ESAL volunteer Shanshan Li. I had the pleasure of moderating the panel, which featured Sarah-Jeanne Royer, a postdoctoral fellow at the Scripps Institute of Oceanography; Jonathan Krones, a visiting assistant professor at Boston College; and Miriam Gordon, the policy director for the nonprofit Upstream.

Royer kicked off the event with a presentation on her work following up on the unexpected discovery that plastic waste in the environment emits greenhouse gases (GHGs). She exposed different types of polymers to light and measured the production of methane and ethylene. She found that all seven most commonly-used polymers in plastic material contribute to GHG emissions. Royer’s research also revealed that the production of GHGs increased over time as plastic degrades into smaller pieces, or ‘microplastics.’ Royer closed her presentation with a call to action to remove plastic from the environment, highlighting her own efforts to organize beach clean-up initiatives. She ended by recognizing that the most important solution for the future is to actually reduce future consumption of single-use plastics.

Krones presented his work in the field of industrial ecology. He outlined the model of ‘societal metabolism,’ in which a community is viewed as an organism - it draws in natural resources, consumes them, converts them into other needed goods and services, and then returns degraded resources in the environment. Krones explained how such models can be used to explore which processes have the greatest environmental impacts. Much of Krone’s own work has focused on improving the quantification of solid waste data. A key take-away from his presentation was that people should always approach measurements and data with healthy skepticism, and ask ‘where did that number come from?’ In addition to his academic research, Krones also highlighted his work in public policy, which ranged from working for a utility commissioner in New York City, to joining the White House Council on Environmental Quality as an intern. He has also started local community repair events in Boston, which he hopes can engage people and help them to think differently about their consumption and disposal habits.

After the two scientific talks, Gordon ended with a discussion on how technical knowledge can actually be translated into policy. She homed in on businesses or producers as the key stakeholders, which need to have a financial interest to reduce waste at the source. She noted that solutions such as recycling and composting are ultimately not sustainable, and highlighted how they can also have unintended environmental impacts. For example, compostable paper and fiberware products are often coated with toxic fluorinated chemicals that leach into the ground. While Upstream does some work on improving waste management practices, the organization’s main focus is on ‘reduce and reuse.’ She outlined that not only do re-use policies achieve the greatest environmental benefit, but they are ultimately cost-effective for businesses and communities in the long-run. Gordon described Upstream’s vision for ‘indisposable communities’, in which re-fillable, reusable products are ubiquitous -- from homes, to fast-food restaurants, to hotels. She gave several examples of communities where policy is being used to drive innovative business solutions that are achieving this vision

A lively Q&A discussion followed the three presentations. One key theme that emerged was the importance of getting involved in what matters most to you. To the early career researchers weighing public policy engagement with their academic goals, Krones urged them to think about why they chose to be an academic in the first place, and to take risks. As a personal anecdote, Royer revealed that her advisor initially didn’t want her to focus on plastic research. However, she knew it was important, and continued to bug him until he gave in. She has been pursuing her passion working on plastic waste research ever since. She encouraged audience members to similarly find what is important to them, stating “Follow your heart, follow your dreams, and you’ll always find a way.”

Ecology
ESAL Events
Sustainability
Engineers & Scientists Acting Locally (ESAL) is a non-advocacy, non-political organization. The information in this post is for general informational purposes and does not imply an endorsement by ESAL for any political candidates, businesses, or organizations mentioned herein.
Published: 07/8/21
Updated: 02/7/22