The Center for Human-Carnivore Coexistence: Minimizing Conflict Between People & Nature 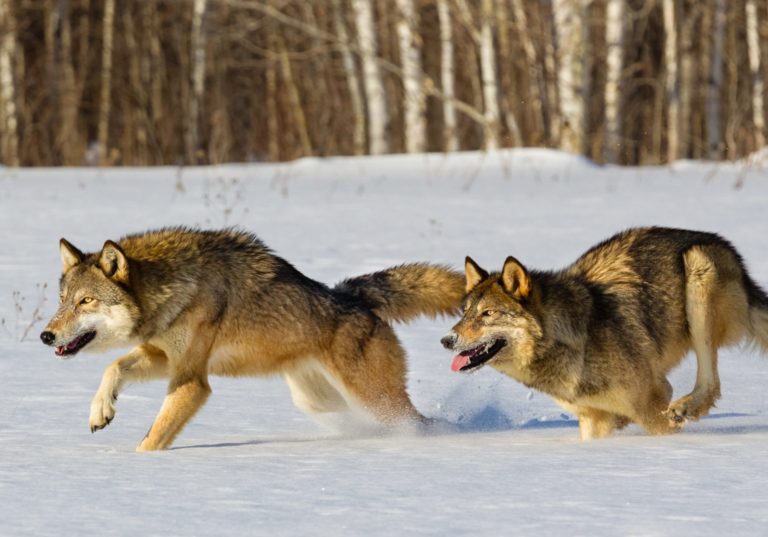 The Center for Human-Carnivore Coexistence (CHCC) is housed at Colorado State University (CSU), with a focus on transforming the relationships between humans and carnivores, such as bears, wolves, and big cats, to reduce conflict and support coexistence. The Center relies on interdisciplinary teams of ecologists and social scientists to tackle the complex challenge of fostering environments where both people and carnivores can thrive. ESAL spoke with Center Director and wildlife biologist Kevin Crooks, and with Assistant Professor and conservation psychologist Rebecca Niemiec about the Center’s role in the reintroduction of gray wolves to Colorado.

DR: How does CHCC engage with policymakers and others in Colorado?

Crooks: The goal of our Center is to inform the decision-making process by bringing the best science to the table – both ecological and social science. This is particularly important because there is so much misinformation and mythology about wolves. Ultimately, we want to help reduce conflict around wolves – both human-wolf conflict and social conflict between people. Our mission is to develop practical, real-world solutions to improve the lives and livelihoods of both people and wolves.

DR: How do you come up with solutions that meet the needs of both?

Niemiec: I am particularly interested, in my research, in understanding the human dimensions of natural resources management issues. In my lab, we have been studying peoples’ attitudes and perceptions toward wolf reintroduction through surveys, media analyses, interviews, and messaging experiments. We are gathering the data to try to inform stakeholder and public engagement efforts around the planned reintroduction to reduce social conflict and ensure diverse perspectives are heard.

DR: Why does wolf conservation demand not only an ecological, but also a social science approach?

Niemiec: Wolf reintroduction is a highly contentious issue. It has become emotionally charged and symptomatic of the broader cultural wars between urban and rural communities.

Crooks: Yes, ultimately much of the conflict around the wolf issue is social conflict between people with differing views and values. So, this demands a focus on people as well as wolves.

DR: How do you engage people at the front end, in planning for potential reintroduction?

Niemiec: We hosted a two-day workshop that brought together various groups – ranchers, environmentalists, government agencies, hunters, and individuals from animal rights organizations and sovereign Native American nations – to discuss how we could move forward. We are promoting an inclusive stakeholder engagement process that reduces social conflict and enhances trust through shared decision-making to develop acceptable management plans.

Crooks: We also worked to include science-based information in the conversation. For example, we collaborated with CSU Extension and the CSU Center for Collaborative Conservation to publish a series of information sheets on Colorado wolves, as well as FAQ answers. The information sheets were distributed by state extension agents already connected with local communities. We also collaborated to help produce two different webinar series on topics like community perspectives on wolves, the science of wolf restoration, and the experience of living with wolves. In all, our educational efforts generated an estimated media reach of more than 316 million people.

DR: Are there any groups that you feel it’s particularly important to engage?

Crooks: We are trying to amplify indigenous voices in the dialogue and decision-making regarding wolf restoration. Indigenous people have often not been meaningfully included in many wildlife management decisions. To that end, one of our webinars last fall, produced with the Denver Zoo, was a panel discussion among tribal leaders, led by Rain Bear Stands Last, executive director of the Global Indigenous Council. Of course, we are also working to engage the ranching community, because if wolves attack livestock, those individual ranchers are going to bear the brunt of the costs that wolves might cause.

DR: Do you have evidence that your stakeholder outreach and engagement is making a difference in people’s perspectives?

Niemiec: We gathered data some through pre- and post-surveys of members of the public who attended our webinars in Fall 2020 to look for shifts in knowledge, attitudes, or beliefs. We found significant increases in people’s confidence about discussing wolf reintroduction with others, the start of building a less contentious community around wolf management. We also found an increase in webinar attendees’ reported knowledge of the science and diverse perspectives related to wolf reintroduction and management.

DR: What concerns do you have about how the wolf reintroduction will go?

Crooks: I am confident that the talented group of wildlife biologists at Colorado Parks and Wildlife, working with other experts in Colorado and elsewhere, can develop a sound plan to best reintroduce and manage wolves in the state. My primary concern is trying to minimize conflict before, during, and after restoration, particularly conflict among people about wolves.

DR: Is there anything different about this wolf restoration than previous ones in other regions?

Crooks: In the 1980s-90s, gray wolves were reintroduced to the greater Yellowstone region, Mexican gray wolves were introduced to the Arizona-New Mexico border, and red wolves were introduced to North Carolina. The difference with the Colorado reintroduction is that this is the first time that the decision to restore wolves was decided by the general public, via ballot initiative. Also, the prior reintroductions tended to focus more on the ecological side – for example, how many wolves to release and where. From my perspective, less focus was directed toward reducing social conflict among people about wolf restoration.

Niemiec: This time, we are paying more attention to meaningful stakeholder engagement. Social science research has provided insight into the value broadly of participatory processes in resolving conflicts. We are drawing on that research literature, as well as studies that have shown specifically, for wolves, the importance of building trust in processes and decision makers.

DR: Where do you each hope to see Colorado in five years in terms of wolf reintroductions?

Niemiec: I think wolf restoration is a microcosm for some bigger issues we are facing as a country – divisiveness and polarization between groups. I’d like to see us succeed at what has become increasingly difficult: developing policies that address the needs of multiple groups. In my research, one of the things I’m most interested in doing is tracking what’s happening in terms of public sentiment and stakeholders over time. Do perspectives change? Does conflict reduce?

Crooks: The management plan is under development and wolves are slated to be restored to the western part of the state starting by the end of 2023. I’d like to see a successful wolf restoration; we define “success” as the coexistence of both sustainable wolf populations and thriving human livelihoods with minimal conflict.

Engineers & Scientists Acting Locally (ESAL) is a non-advocacy, non-political organization. The information in this post is for general informational purposes and does not imply an endorsement by ESAL for any political candidates, businesses, or organizations mentioned herein.
Published: 03/14/21
Updated: 07/10/22