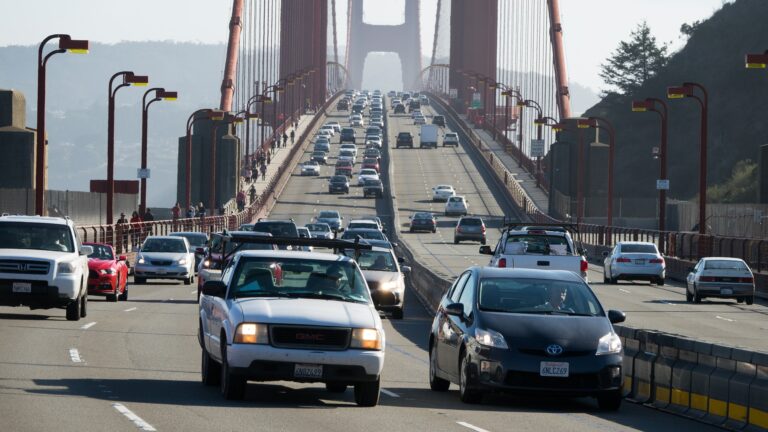 Traffic in California's Bay Area. (Credit: ItsaWaB / Pixabay)
Our "Stories from the field" series shares the experiences of engineers and scientists who are making a difference in their communities.
Share this article

Our “Stories from the Field” series shares the experiences of engineers and scientists who are making a difference in their communities.

Arpit Soni helps decarbonize transportation at Amazon to support their goal of reaching net-zero carbon emissions by 2040. Back in his home country of India, Soni had studied energy engineering and worked in carbon offset markets before immigrating to the United States. He obtained a master’s degree from the climate and society program at Columbia University and then moved west to work at the California Air Resources Board (CARB), a state agency that has been an early adopter and leader in carbon regulations. ESAL interviewed Soni about his career trajectory and his role in laying the groundwork for climate action in California and beyond.

LZ: What is your role at Amazon?

Soni: I am part of Amazon’s Worldwide Sustainable Transportation team. My focus is on supporting decarbonization of our external transportation providers, which ranges from giants like UPS and DHL, to a single driver who picks up a grocery order. We work to align our transportation providers with Amazon’s public commitment to “Shipment Zero by 2030,” to deliver 50% of all packages by 2030 with zero emissions in packaging, transportation, and facilities. Shipment Zero, though, is just the midpoint check for Amazon’s Climate Pledge of reaching net-zero by 2040.

Soni: Net zero carbon refers to when you are removing as much carbon dioxide as you are emitting into the atmosphere. The difficulty of defining net zero lies in offsetting versus decarbonization. Carbon offsetting is where somebody can still release all their emissions but just pay somebody else to reduce emissions on their behalf in another part of the world. Whereas decarbonization is actually reducing your own emissions. Right now, there are no standard industry guidelines or definition of what net zero would look like and how much a company can rely on offsets.

LZ: Going back to the beginning, how did you get into the energy and climate space in the first place?

Soni: I was born and brought up in India and growing up I was always fascinated  by energy systems. I always wanted to become an engineer and the university I attended had a new program for energy engineering. That was a momentous time in my life when I got introduced to the problem of climate change. Nobody in India was talking about climate back in 2007. Initially I started learning on my own and came across Al Gore’s An Inconvenient Truth. After completing my engineering, I made it my mission to find a job in the clean-tech sector. I turned down job offers to work for fossil fuel companies and landed my first job at a very small startup in India that was working in environmental markets and climate policy, which were unknown concepts for me back then.

At the startup, I had the amazing opportunity to lead a new research desk on the California carbon market. As part of that, I was responsible for understanding regulations and coming up with data analytics and knowledge products for our customers. I learned about climate policy in California sitting at my desk in India. It pushed me to come to the U.S. where I attended a program called “Climate and Society” at Columbia University. My goal was to move west to work on California’s policies, and eventually, I ended up at CARB.

LZ: What is CARB’s role in California?

Soni: They came into being in the 1960s when poor air quality was a major problem in California. They have been the leading public agency, not just within the U.S., but internationally as well, putting out the most ambitious and technically advanced policies to combat air quality and climate change. CARB has made California into a poster child for international climate dialogue. When people ask why I chose to work at a regulatory agency, I tell them to think of CARB as the Amazon or Google of the climate policy world. This is the institution working at the cutting edge and nobody else has been able to do as much in the last couple of decades.

LZ: What programs did you work on at CARB?

Soni: When I got to CARB, my job there was to work on the Low Carbon Fuel Standard (LCFS) program. I already had some background in cap-and-trade, so I thought, how hard can LCFS be? I couldn’t have been more wrong. It was a very different program.

To give some background, the LCFS was designed by CARB to reduce the carbon intensity (CI) of transportation fuel in California. Originally in 2009, the goal was to reduce CI by 10% from 2010 levels by 2020. However, given the sheer success of the program, they extended it to a 20% reduction in CI by 2030. They will very likely make it even more stringent in a couple of years to align with California’s goal to reach carbon neutrality by 2045.

Besides reducing transportation emissions, LCFS has been successful in driving technological development and supporting deployment of zero emission fuels like electricity and hydrogen. Some of these technologies wouldn't have really taken off at the same speed and scale in the absence of this program.

LZ: What did you take away from your experience at CARB?

Soni: One of the biggest takeaways for me working at CARB was the importance of policy in solving large problems, not just climate. I’ve seen how well-informed policy based on scientific principles, data, and proper stakeholder engagement is likely to succeed and serve the people as intended. If you craft your policies smartly, you can achieve more than the intended benefit.

LZ: Why do you think climate policies in California have been successful?

Soni: California and politically liberal states, like New York lately, have the mandate from the public. California always had leaders who were inclined to act on climate, including both democrats and republicans in the state.

CARB has been successful because they have technical people working to develop these complicated policies, which were built on the learnings of prior emission trading programs, so they avoided some past pitfalls. CARB had some difficult phases, but have always garnered industry support which has allowed them to move quickly on several ambitious policies.

LZ: Why is local engagement important to the climate movement?

Soni: If you look at climate change, it is an international issue. However, if you follow the history of climate negotiations at the international level, you will see it has always run into roadblocks because there are so many interests involved. It’s becoming increasingly important to start solving climate change at the local jurisdiction level, because getting 200 countries to say “yes,” while maintaining equity, is really complicated.

I heard somewhere that in a few years every job is going to be a climate job. Every industry you work in will be trying to solve this massive problem in one way or another.

Engineers & Scientists Acting Locally (ESAL) is a non-advocacy, non-political organization. The information in this post is for general informational purposes and does not imply an endorsement by ESAL for any political candidates, businesses, or organizations mentioned herein.
Published: 12/18/22
Updated: