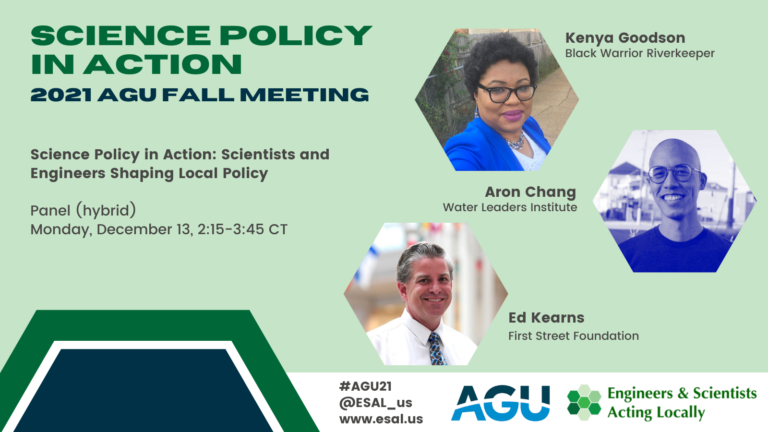 “If you want to connect with a certain community, how do you initiate that conversation?”

This question was posed to a panel of water experts at ESAL’s “Science Policy in Action: Scientists and Engineers Shaping Local Policy.” The event, held in-person in New Orleans and virtually, took place at the American Geophysical Union’s fall meeting in December 2021.

The answer to that question depends on who you talk to.

Kenya Goodson, who holds a doctorate in civil engineering, is a STEM educator with years of regulatory and research experience on water quality. Her practical advice is to attend city council meetings to network with local representatives, or, at the state level, to join an existing organization with statewide influence. Goodson traced her journey from her childhood growing up in an environmental justice community in Tuscaloosa, Alabama, where the neighborhood was majority African American and filled with food deserts and polluting industries. Her later work inspecting wastewater systems for the state of Alabama made the disparities clear, and eventually led her to engage in political advocacy, including for her hometown watershed, the Black Warrior River.

Goodson believes in educational outreach as a policy tool: “Our responsibility, if we want to have true impact in our community, is to translate science knowledge for everyday people to understand.”

Aron Chang is an urban designer in New Orleans, who works on community-based planning of resilient infrastructure and co-leads the Water Leaders Institute. His philosophy of inclusivity permeated both his presentation and his responses to questions. He advised everyone to reframe their mindset and bring their full humanity to conversations on local issues.

“Show up not as a scientist but as a community member and as a human,” said Chang.

The problem of floodwaters and climate change is especially pertinent to the city of New Orleans, which is “shaped like a bowl” and is a place that has wrestled with naturally shifting waterways for thousands of years. Chang pointed out the difficulty of manmade interventions like levees and pumps, which can ironically cause the city to sink further. He believes the solution lies not just with more technology, but with more voices from the community.

Ed Kearns, who has a doctorate in oceanography, transitioned from a career at federal science agencies into a role with a hyperlocal focus. Currently, he serves as the chief data officer at First Street Foundation, a nonprofit that assesses and translates climate risk for the individual. Their latest tool is a web app called Flood Factor, which calculates flood risk at the three meter resolution for all properties across the U.S. The output is a simple flood score that any homeowner (or buyer or seller) can access online. To maximize their reach, First Street Foundation has strategically engaged with local media such as TV stations and newspapers, because those outlets know their communities best.

Kearns, who calls himself “a sucker for big impact,” is motivated by the urgency of the climate crisis and reflected on why he left the slow-moving federal bureaucracy. His desire for change, fast, was something he realized he could only achieve by taking a local approach.

For further reading, check out these interviews with Kenya Goodson and Ed Kearns on ESAL’s blog.

Civic Engagement
Community
ESAL
ESAL Events
Policy
Engineers & Scientists Acting Locally (ESAL) is a non-advocacy, non-political organization. The information in this post is for general informational purposes and does not imply an endorsement by ESAL for any political candidates, businesses, or organizations mentioned herein.
Published: 02/3/22
Updated: 07/31/22