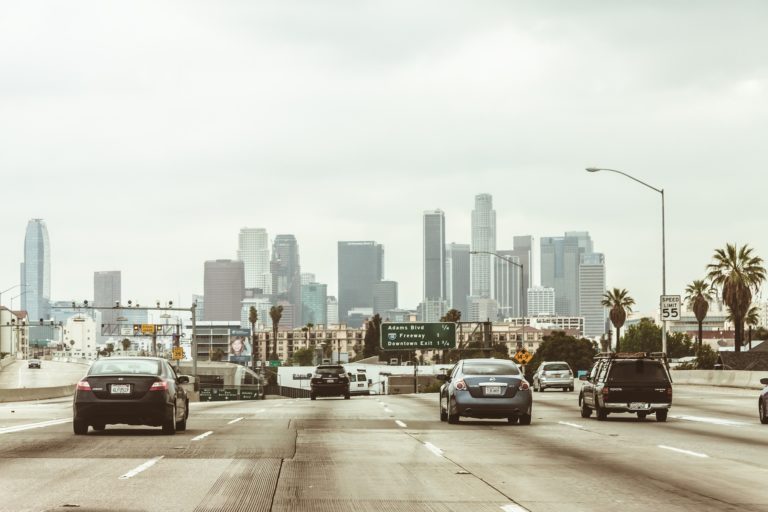 Downtown Los Angeles.
Our "Stories from the field" series shares the experiences of engineers and scientists who are making a difference in their communities.
Share this article

Jeanne Holm began with a degree in English and Biochemistry from UCLA, and went on to the graduate program in information systems at Claremont Graduate University, which prepared her to be NASA’s chief knowledge architect. Today, Holm serves as a senior technology advisor to Los Angeles Mayor Eric Garcetti, as well as deputy chief information officer for Los Angeles. Somehow, she also finds the time to instruct courses on data innovation at UCLA, and to run a nonprofit bringing data access to Sierra Leone and other African countries. ESAL interviewed Holm about her path to becoming an inspiring leader in information systems at local and global scales.

DR: When did you get excited about information systems?

Holm: At UCLA, I took a technical writing course that focused on how to communicate highly technical material to a broad audience. I think of myself as more of a technical translator than a technologist. Some people in STEM careers need support to communicate with public audiences about their work.

DR: Did your subsequent career at the Jet Propulsion Lab reflect your interest in “translating” STEM?

Holm:  Eventually, yes. I ended up overseeing their publications department, where I documented and managed information about deep space and interstellar missions. I got to work with exciting programs, like the Galileo Mission to Jupiter, and collaborate with great scientists. I got interested in how we disseminate info from NASA to the broadest possible audience.

DR: What dissemination modes was NASA using then?

Holm: It was pre-internet, so books and brochures and posters. When the internet started to emerge in the late 80’s, I created a technical reports server on the web and assembled the first webmaster group at NASA. For some reason, I could see the future of information as plain as day.

DR: I know that you also became a data “evangelist” for the Obama administration. What did that entail?

Holm: My role was to make the huge wealth of data collected by government organizations available to the public. I was on a personnel loan from NASA to the White House for six years, during which I helped build the data.gov open data ecosystem.

DR: Did you feel prepared when you landed in the White House from NASA?

Holm: Yes, NASA turned out to be great preparation for the pressure and pace at the White House. NASA is a 24/7 kind of place, especially during deep space exploration missions, when we would barely sleep for several weeks. Both settings were exciting and invigorating. Still, it was challenging, especially given that I was commuting regularly to D.C. from Los Angeles, leaving my husband and three young kids.

DR: What about the challenges of the job itself, in relation to your background?

Holm: The biggest challenge was building the momentum for the expansion and use of open data. Government datasets ranged across sectors, from education to health care, energy, crime, environment, etc. The data ecosystem started with just 37 datasets and progressed to include sets from 135 government agencies! Our challenge was not only to get government agencies comfortable with sharing their data, but also help the public find and use it.

DR: Could you give me an example of how data.gov could be used?

Holm: Sure. These days, governments share data about traffic and road closures, which is made available to people through Waze. No individual could process all that data. Rather, we need entrepreneurs to interface between government data and public consumers.

DR: It sounds like you were an “intrapreneur” (an inside entrepreneur) for data.gov. What skills did you bring that gave you such facility with data?

Holm: Along the way, I returned to school in information science at the Claremont Graduate University. Many people are self-taught, but I wanted a rigorous training in system design. I have since continued to a Ph.D. and am about to defend my dissertation. Having the formal training helps me collaborate with teams in data architecture and design. Claremont takes a holistic approach that suited my interest in communication of technical information. While I did not have a bachelor’s in computer science like other grad students, my writing skills were invaluable.

DR: How did your graduate work change your perspectives around data science?

Holm: I learned a lot about what I didn’t know that I didn’t know! The Claremont program helped build what I’d called information muscle memory. Databases, structures, systems, i.e. “geek stuff,” got embedded in my psyche, giving me a toolbox for approaching complex problems.

DR: What sorts of complex problems do you face in your current role with Los Angeles?

Holm: I wear two hats with the city. I oversee a bunch of infrastructures, such as 311 call centers, social media, television, data, help desk, predictive analytics, warehouse, and inventory. Also, I advise Mayor Garcetti on difficult problems. These include traffic problems - thanks to a Toyota Mobility Foundation Grant, we are looking to improve computer vision with machine learning. I also oversee our city’s push towards UN Sustainable Development Goals, funded by the Hilton Foundation.

DR: It sounds like you have a full plate.

Holm: Yes, and we just got awarded a NASA grant to study air quality of LA. The plan is to integrate satellite and ground data to predict and mitigate effects of air quality and share with other cities around the world.

DR: I’ve seen that you have a motto, “Be Kind, Be Curious, Be Brave.” Is that what has sustained you during this challenging career?

Holm: Yes. I’ve had the most amazing and transformative experiences when I overcame a personal or physical hesitation. Choosing to be brave in a moment of fear really opens your life. Curiosity makes me explore new opportunities. Kindness is so important in everything we do. While kindness does not come from any single religion, I am a deeply religious person, and have made passages from the Bible my core. Living a kind life makes everything so much easier.

DR: You started a nonprofit, openAFRICA, that builds and supports a continent-wide open data portal to make data accessible to help people in difficult circumstances. Was that motivated by your ethic around kindness?

Holm: Yes. After I left the White House, I worked for the World Bank on facilitating open data for the African nations. I fell in love with people across the continent, in Sierra Leone, Tanzania, Ghana, etc. I was there during the Ebola outbreak in Sierra Leone and was amazed at peoples’ resolve and resilience. After the World Bank program ended, a friend and I decided to carry on with capacity-building and training in data use for African youth.

DR: What is your advice to young or older STEM professionals about getting involved in change-making in their local communities, as you have done?

Holm: Two things: First, I encourage people in STEM careers to try something different, maybe outside of their comfort zone, that will benefit their communities. That could be getting involved with local government, or just speaking up when something is not right. Scientists don’t realize the power they have – to understand complex issues and help come up with impactful solutions.

DR: And the second?

Holm: My second piece of advice is that every STEM person try what I call “+1 experiences.” This means just inviting and taking young people along with us, whether to a scientific lecture, a meeting with a City Commissioner, or other event. If young people are included and get a voice, they become connected with civic issues. Even an 8-year-old can have an amazing idea. These young people are going to shape our city, our government, and our country in the future.

Engineers & Scientists Acting Locally (ESAL) is a non-advocacy, non-political organization. The information in this post is for general informational purposes and does not imply an endorsement by ESAL for any political candidates, businesses, or organizations mentioned herein.
Published: 02/23/20
Updated: 08/16/22