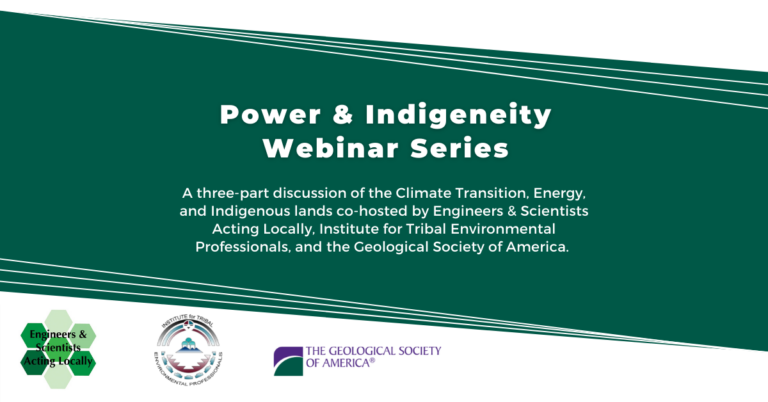 The event featured two panelists who are both at the forefront of empowering Indigenous communities to take advantage of clean energy development opportunities. The moderator was Nikki Cooley, a citizen of the Diné Nation, interim assistant director of the Institute for Tribal Environmental Professionals (ITEP) and co-manager of ITEP’s Tribes & Climate Change Program.

Both Navajo Power and the TSAF use a bottom-up, community-led approach. Tallmadge explained how Navajo Power is moving away from the top-down, often exploitative model of traditional energy companies. “We work in partnership with households first and foremost to ensure that they receive revenue, jobs, and community benefits from the projects, rather than just the tribal government, and we let communities decide whether, where, and on what terms projects are built.” Clairmont noted that at the TSAF, they see tribes as the leaders in renewable energy projects. “Tribes come to us, and then we develop plans and designs in the process of building that relationship,” she explained. The projects that TSAF supports often involve household members as part of the installation process, so that tribal members see themselves as owners of the system.

Both panelists outlined the tremendous opportunities of renewable energy development for tribal communities, with Tallmadge pointing to a 2018 study by the National Renewable Energy Laboratory indicating that Native tribes could provide 6.7% of U.S. renewable energy capacity, yet 86% of Indigenous lands with energy or mineral resources remain undeveloped. Renewable energy projects have the potential to benefit the entire country, including Indigenous communities, which as Clairmont noted, are disproportionately impacted by the effects of climate change. “In order for them to become energy resilient, and energy sovereign, tribes are looking to solar and other forms of renewable energy,” she explained. Both speakers also highlighted renewable energy as an engine for economic development. “Tribes should be key to the transition away from fossil fuels to renewable energy, and be able to transform the challenge of the climate crisis into wealth- building opportunities,” Tallmadge said.

Part 1 and Part 2 of the Power & Indigeneity series emphasized sovereignty as an important concept in environmental decision making. In this discussion, panelists discussed how sovereignty presents both opportunities and challenges to renewable energy development. Tallmadge explained that because tribal land is held in trust by the federal government, Indigenous nations can’t use their land as collateral for financing, and all decisions related to land use must be approved by the Bureau of Indian Affairs. Working within tribal lands requires navigating a complex mosaic of federal, state, tribal, and private jurisdictions with varying regulations. These and other barriers make it difficult for tribes to access the financing needed for renewable energy projects. In her presentation, Tallmadge discussed possible solutions to some of these regulatory barriers that are being explored at the federal, state, and local level. Sovereignty also provides unique benefits. As Clairmont noted, tribes can use their sovereign authorities, including taxation, land-use planning, zoning regulation, and licensing to ensure that energy programs that they implement fit the needs of their communities. She also highlighted the importance of traditional knowledge, another theme that was explored in the previous panel discussions. She described how Indigenous peoples have been innovative and resilient in the face of environmental change for hundreds of years. This knowledge and innovation can be leveraged in designing renewable energy projects. “Our Tribal partners acknowledge and accept traditional ecological knowledge as a valuable tool in developing their own unique solutions,” said Clairmont.

The panel discussion also followed up from Part 2, which explored the impact of extractive industries on Indigenous land and the possibility that these impacts could be worsened with increased demand for renewable energy. Clairmont and Tallmadge both acknowledged this as well. Clairmont noted that TSAF is looking at ways to recycle solar panels and invest in other technologies, such as battery storage, to help alleviate the demand for critical minerals. Ultimately, efforts to center tribal communities in renewable energy development will be critical. As Tallmadge stated in her closing remarks, “I do think that if we are not intentional about our interventions, policies, and efforts to develop new initiatives, the exploitation of the fossil fuel industry will continue into clean energy. We need to be really intentional about how we form solutions and businesses to put our nations first and foremost in the line to this transition.”

100 Years of the 19th Amendment: A Discussion on Progress and Challenges
Ensuring a Just Transition to Electric Vehicles in California
Tech Exchange Tackles Technology Inequality
A Data Scientist Goes to the State House
Moving from "Evidence-Based" to "Hypothesis-Driven" Policy-making
Scientists as Citizens: Aspiring to the Best of All of Us
Safeguarding Civil Liberties in Municipal Use of Facial Recognition
Physicist from Appalachia Harnesses Machine Learning to Inform Local Healthcare Solutions
Science Policy in Action: Making Local Connections
Scientists as Civic Participants: Keeping the Faith for Democracy