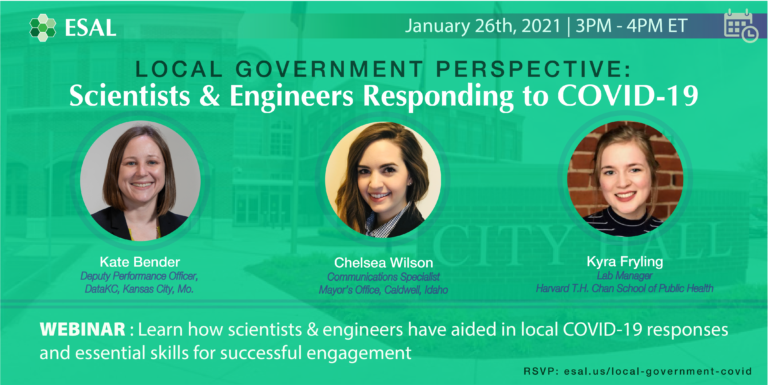 During the pandemic, scientists acquired an elevated platform and, with it, significant responsibility to explain the science behind COVID-19. However, the interaction between science and politics has been both synergistic and fraught with friction. While this dynamic unfolded on the national stage, it has also taken place in smaller settings. These local interactions were the topic of ESAL’s recent webinar, Local Government Perspective: Scientists & Engineers Responding to COVID-19. This virtual event was on Tuesday, January 26, and was moderated by ESAL events team member Jared Mondschein.

As city employees, Wilson and Bender shared how they’ve interacted with engineers and scientists during the pandemic. In Caldwell, a city of about 60,000, Wilson has worked primarily with experts embedded in public agencies, including engineers from the wastewater treatment plant, transportation officials, and the larger health district that includes her city.

Bender, who works for a division that uses data to support performance goals in Kansas City, said she was already steeped in evidence-based decision making. Since last March, her office has used a series of surveys to track resident perceptions and built a dashboard to track the spread of coronavirus, a tool they’ve continued improving over the past year. According to Bender, given the high stakes of a global pandemic, “it’s been really gratifying to deliver data in a way where I know it’s really being used by our community.”

On the other side are scientists like Fryling, who at the start of the pandemic began thinking about ways to help. As Fryling explained, “I felt powerless in the whole situation. I had a background in infectious disease and an understanding of public health research, but not a good way through my work to directly support my community.” She started searching for opportunities and landed on the Academic Public Health Volunteers Corps (APHVC), a volunteer program run by the state. Through APHVC, Fryling was connected with the public health board in Holyoke, MA and helped them to condense and communicate COVID-19 health guidelines.

From the government perch, Bender has witnessed successful collaboration between scientists and local officials throughout the pandemic, which has evolved her views on the utility of combining perspectives. She recognizes, though, that this relationship between science and politics is complex and requires a sense of tact to maintain popular support, especially in communities like greater Kansas City, where political views vary widely.

Often, scientists have trouble communicating and can fail to engage their local governments. To avoid these pitfalls, Wilson advises scientists to know your audience, “You may be bringing something truly valuable to the table, but if you’re not conveying it in a way that the local government can understand, it’s not going to be successful.” Wilson emphasized that building relationships with local employees and local representatives is one of the most effective ways to make inroads.

Mondschein, as moderator, shared his own anecdote of a fateful email he sent at 3 a.m. to a local official on the COVID crisis. He found that even a small action can have a big impact - that email led to monthly breakfast meetings and sparked an ongoing dialogue.

Bender suggested trying social media, and specifically Twitter, to educate yourself on issues and to make connections, but noted that the online presence should eventually move into the physical world. Leveraging your skills into a position on a local board or commission is a particularly impactful way for scientists to contribute. [For more information, see ESAL’s Playbook guide on how to join a local board or commission.]

As a scientist and newcomer to public service, Fryling reflected on her experience as a pandemic volunteer and discussed the validation of taking that first step. She learned that you don’t have to be a subject matter expert to get involved because technical skills are broadly applicable, and that local governments are highly receptive to help. The experience further cemented Fryling’s underlying interest in civic engagement by showing her the possibility of balancing hard science and public policy.

To close out the event, each panelist offered final thoughts on the subject of scientists engaging in local government. Fryling believes there doesn’t have to be a science versus government tribalism. She advises fellow scientists to “put yourself out there in a way you didn’t think possible before” and to be open to opportunities.

Both Wilson and Bender are thrilled that a group like ESAL exists, working to bridge engineers and scientists with their communities. Bender advocates for that strain of informed engagement, “The scientific mindset, approach, and attitude is so needed and there are so many opportunities to integrate it into government.”

Wilson echoed the sentiment that local governments are always looking for engaged citizens: “We’re happy to hear from you.”

COVID-19
ESAL Events
ESAL news
Engineers & Scientists Acting Locally (ESAL) is a non-advocacy, non-political organization. The information in this post is for general informational purposes and does not imply an endorsement by ESAL for any political candidates, businesses, or organizations mentioned herein.
Published: 02/19/21
Updated: 09/13/22

VaCS: Student-led COVID vaccine outreach
A Chemical Engineer’s Path to Responding to COVID in the Wyoming Senate
Science Kits: Fostering STEM Learning During Lockdown for Hayward Students
Science Policy in Action: Making Local Connections
Science, Technology, and the Vote: Securing the Integrity of Elections
Local STEM Database
Advocating for Policy in the State Legislature
Communicating Science: Responding to COVID
Scientists as Citizens: Responding to Community Needs
Scientists as Citizens: Aspiring to the Best of All of Us