100 Years of the 19th Amendment: A Discussion on Progress and Challenges 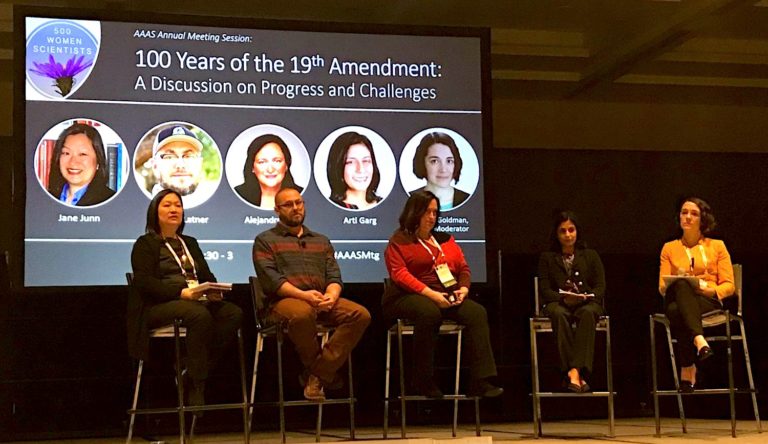 100 Years of the 19th Amendment: A Discussion on Progress and Challenges. From left to right: Jane Junn, Michael Latner, Alejandra Tres, Arti Garg.
Share this article

ESAL Founder & Chair, Arti Garg, delivered the following opening remarks as a panelist in a Town Hall discussion entitled “100 Years of the 19th Amendment: A Discussion on Progress and Challenges,” at the 2020 Annual Meeting of the American Association for the Advancement of Science. These remarks have been lightly edited for clarity.

“Decisions are made by those who show up.” – Unknown

When I speak to scientists and engineers about the importance of local engagement, I frequently start with this quote. To me, in the context of local engagement, this quote reminds us that to effectively impact decisions in our community, we need to have ongoing engagement with decision makers…something that’s easier to do locally than with the federal government. (And, by the way, if you’re wondering about the origin of this quote, all I can tell you is that I first heard it on an episode of the West Wing and have spent an embarrassing number of hours unsuccessfully trying to find out who first said it.)

But, I’m sitting here on a panel about voting rights. What does local engagement have to do with those? Well, to the extent that voting rights are the currency of democracy, they are also about who gets to “show up” and have their voices heard. To me, voting rights matter because having the right to vote is also about having the right to be represented. Our American democracy is predicated on the idea that citizens have the right to hold their leaders accountable. Voting is a mechanism by which we can hold our leaders accountable on the cadence of election cycles. In most of the U.S., we have the opportunity every two, four, or six years to decide whether our representatives should keep their office.

Voting is just one mechanism for driving accountability. What about the time between elections? This is when the too often overlooked mechanism of engagement to drive government accountability comes into play. So, why engagement? One way I think about this is that voting is an important but, ultimately, passive activity that generally amounts to endorsing a candidate’s stated positions or their governing philosophy. Alternatively, active government engagement is about trying to shape those positions and philosophies. Often, it’s about teaching our representatives about the nuances related to positions we, at a high level, share with them.

When it comes to policy and policy implementation, those nuances matter a lot. To illustrate this, I’ll share my own experience. I serve on the Community Services Commission in my city of Hayward, California. Our charter is to make recommendations to city council about how to distribute funds for social services. We’re a diverse body and about three times the size of our city council. We bring a variety of perspectives and lived experiences. Some of us have children with special needs; some of us work in and understand the healthcare system; we have varying immigration experiences; some of us have past professional experience working in the non-profits the city funds. As a group, we all share the same goal: to best leverage these funds to serve our community. We also have similar values. For most of us, addressing homelessness is a key priority. But our different experiences lead to differences about how to get to these goals. We often disagree, sometimes passionately. But having this diversity of experience helps us be more representative of our city’s residents, so that we can make decisions that best represent our community. I can say for myself that listening to my fellow commissioners has caused me to change my thinking on issues I used to feel strongly should be handled in a different way.

Now you’re probably wondering, “What does this have to do with voting rights?” Well, my right to be on that commission is tied to my right to vote. Explicitly, one of the eligibility requirements is “being a qualified elector of the City.” In other words, to serve on the commission you need to have the right to vote for the city’s elected officials. So, to me, voting rights are not just about voting, they are about having a voice in my democratic government. (Of course, I know that having the right to vote isn’t the same as having access to the vote. Many of my colleagues on this stage have already discussed this tension, and I hope we will continue to discuss it in the Q&A.)

Instead, since we’re here at AAAS, I want to tie this idea back to the scientific enterprise. Knowing that we live in a world of haves and have-nots, we as scientists are definitely “haves.” It may not always feel like it, but scientists wield an incredible amount of power. According to a 2019 Pew report, an overwhelming majority (86%) of Americans have confidence in scientists to act in the public interest. That’s power! We also have formal training in how to skeptically parse information. This allows us to feel more confident in our judgments about issues. It also allows us to more easily develop evidence-backed arguments tailored to specific audiences. We can use that power—I would even assert that we have a responsibility to use that power—to give voice to the sometimes voiceless.

To give just one example of how we can use our power to elevate others’ voices, I want to share the story of an astrophysicist, Thomas Beatty, who used to live in Pennsylvania. He became interested in the topic of redistricting to redraw voting districts to be more representative. He became involved with a local organization that was advocating for a law to change how districts were drawn. He was able to use skills for communicating technical issues to talk to Pennsylvania residents about how redistricting affects their representation. And Pennsylvania recently passed redistricting reforms that will likely impact the 2020 election.

But while we have real power to drive change, we must also acknowledge that we have diversity and representation problems within the scientific community. Instead of repeating statistics that most of you have heard many times, I will share my own experience. I am trained as an astrophysicist, and I currently work in AI and high-performance computing. Since graduate school, I have almost always been the only person (or one of very few) who identifies as a woman in the room. This includes in my current work, developing AI technology solutions. Given the impact AI is having on every aspect of our lives, including how government makes decisions, the lack of representation in the AI workforce should terrify all of you.

But it’s not all bad news. Increasing inclusiveness in science can have real societal impact. To once again share a personal story: my aunt, Bina Agarwal, is a political economist who studies the intersection of gender, economic opportunity, and land rights. Her research laid the foundation for a 2005 Indian law that gave women equal rights to inherit land. It can be attractive to say that representation in science doesn’t matter, because scientists are supposed to be objective. But does anyone here seriously think that my aunt’s experience as a woman who stood to one day inherit property in India didn’t impact her choice of research focus in some way? The reality is that having a representative scientific workforce means that we are more likely to study topics that are relevant to a broader set of people. Because scientists are human, and humans have biases. It’s a myth to imagine that, as human beings who conduct scientific research, we can be objective. We are not objective. The beauty of the scientific method is that it provides a framework for science to be objective, even though scientists are not.

I’ve raised many points today, so let me leave you with three takeaways:

First, democracy is messy, and it’s hard. You have to show up. You have to listen. You have to compromise. Sometimes, as hard as it may be for a scientist, you have to admit you were wrong. Quite honestly, I think it would be much easier to be ruled by a benevolent dictator who shares my views. But this obviously wouldn’t work, since we’d need as many dictators as there are people. So, despite its challenges, democracy compels us to show up and engage. By doing so, we can make a difference.

Finally, as scientists, we have the incredible privilege of having a louder voice than many other members of our communities. So, let’s use that voice for good. And let’s recognize that cleaning up our own house and creating a more representative scientific enterprise is about more than scientific progress…it is also about societal progress.

Equity
ESAL Events
Engineers & Scientists Acting Locally (ESAL) is a non-advocacy, non-political organization. The information in this post is for general informational purposes and does not imply an endorsement by ESAL for any political candidates, businesses, or organizations mentioned herein.
Published: 02/23/20
Updated: 09/26/22