Scientists as Civic Participants: Keeping the Faith for Democracy 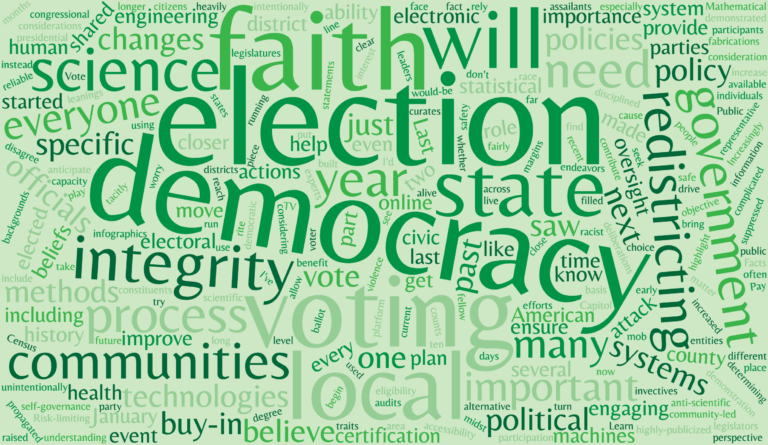 In just two days, the US will engage in a quadrennial rite of democracy when we inaugurate the winner of the 2020 presidential race as the next president of the United States. But this year will be different than anyone alive can remember. The Capitol Building, in which our elected legislators conduct their work, was invaded on January 6, 2021 by would-be insurgents seeking to prevent the certification of last year’s election. For me, the attack has a personal dimension, as I try to reconcile the fact that the hallways shown on TV and in newspapers filled with a violent mob were the same ones I used to walk as a congressional science fellow. The proximate cause for this attack was that the assailants do not believe the results of the election were fairly determined, beliefs seeded by fabrications that were propagated or tacitly supported by many government and media leaders.

Over the past two weeks, I’ve struggled to convince myself that a democracy can survive when a significant number of its citizens no longer believe in its fundamental processes. I don’t have all the answers, but I do know that one important part of how we move forward is to ensure that our electoral processes have integrity and that they have the buy-in of all communities. We saw the importance of this buy-in during the months following our November election. In the US, our elections are overseen by state and county government officials. Last year, officials of all political leanings and parties stood strong, defending their election procedures against lawsuits, invectives and insults, and even death threats. While January 6 provided a clear reminder that not everyone accepted their statements, their actions serve as a demonstration of the important role local government, composed of representatives from local communities, can play in upholding our democratic processes.

In the run up to the 2020 election, ESAL shared information and hosted an event to highlight the important role of science, technology, engineering, and math (STEM) in running and safeguarding our elections. While the next election may seem far away, now is the time to begin engaging with our local and state governments as they plan for future elections. To help you get started, I’d like to share some specific actions to consider:

As I close this piece, I wish I could do so with a stronger sense of optimism. I worry that the recent turn to violence has moved us beyond the ability of peaceful civic processes to not just improve our democracy but to increase all of our faith in it. Because democracy, like science, comes down to faith. We need faith that a system and a disciplined process can allow us to find commonality. As scientists, we put our faith in the ability of the scientific method to bring us closer to objective understanding. For democracy to function, we need faith that our election systems move us closer to representative self-governance. In engineering and science, we sometimes dismiss the importance of faith and may even deem it anti-scientific. I disagree. Science is one of our most human endeavors, and our capacity to maintain faith and hope in the face of adversity is one of our most human traits.

Equity
ESAL news
Engineers & Scientists Acting Locally (ESAL) is a non-advocacy, non-political organization. The information in this post is for general informational purposes and does not imply an endorsement by ESAL for any political candidates, businesses, or organizations mentioned herein.
Published: 01/18/21
Updated: 09/26/22

Advocating for Policy in the State Legislature
Policy's Last Mile
Why Stating Assumptions Enables Policy-making in Uncertainty
From pipetting to policy: Using your skills as a scientist to make a difference in local government
ECO City Farms: Promoting Urban Agroecology
100 Years of the 19th Amendment: A Discussion on Progress and Challenges
Science Kits: Fostering STEM Learning During Lockdown for Hayward Students
ESAL Stories from the Field
Local STEM: STEM in Your Governments and Communities
Science, Technology, and the Vote: Securing the Integrity of Elections