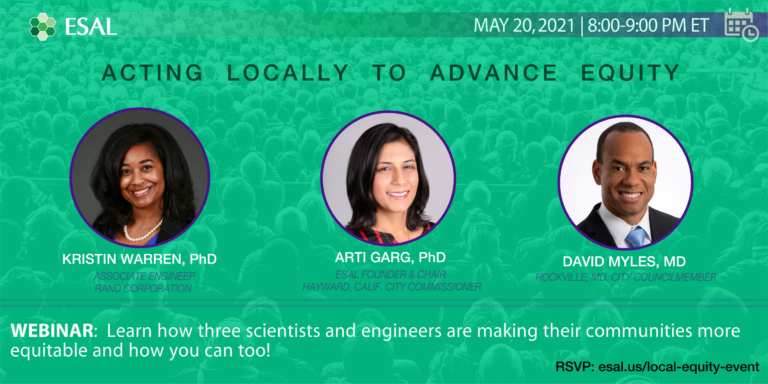 Over the past year, the wave of social justice protests has spurred individuals and institutions across the spectrum to reflect on social and racial inequities. As part of this effort, ESAL hosted a virtual event on May 20, 2021 called " Acting Locally to Advance Equity," centering on the intersection of equity and local civic engagement. (ESAL also created a plan to improve justice, equity, diversity, and inclusion in its volunteer ranks and advocacy work. See this recent blog post about ESAL’s commitment.)

The panel featured ESAL chair and founder Arti Garg, who serves on the Community Services Commission in Hayward, CA. The other two panelists, guests of ESAL, brought valuable perspectives as minorities working in technical and policy settings. Kristin Warren, for example, was the first black woman to graduate with a PhD in mechanical engineering from Carnegie Mellon University. Warren previously served as a senior consultant to the California Legislative Black Caucus before her current job as an engineer at RAND. The third panelist, David Myles, is a pediatrician and faculty member at Walter Reed National Military Medical Center. He is a
first-term city councilman in Rockville, MD.

All three panelists, either through their career or extracurricular roles, have found ways to tackle the problem of equity in their communities. For Warren, working at RAND allows her to explore policies related to the black community such as cannabis and decriminalization. In Garg’s case, her appointment to a green task force in Hayward, CA, originally charged with eliminating urban blight, opened her eyes to the racial and economic disparities within her town. And in Rockville, MD, councilmember Myles has been working to educate the public on the appropriate use of 911 calls and to reduce bias between neighbors.

The panel encouraged those with STEM backgrounds to get involved locally. That involvement can take different forms, such as joining a special interest group, serving on a board or commission, or reaching out to local elected officials to express support for a specific issue. Admittedly, the transition to policy and politics is not always straightforward for engineers and scientists who are trained in objective decision making.

Warren asked everyone to consider, “What moves people? A lot of times it’s the personal story.” In addition to showing data and research, a personal anecdote is often the key to persuading a politician to support your proposal. The personal touch becomes even more important when the data is unavailable, as it often is with local issues like police accountability. In these situations, Garg prefers the use of “hypothesis-driven decision making” where the power of observation and empathy helps fill in gaps. Individual stories and experiences constitute legitimate forms of data too, even if they can’t be easily quantified.

Myles reiterated the hard reality that policy is usually made using anecdotal instead of empirical evidence. He offered practical advice for STEM professionals hoping to break into local policy: break the problem down to a middle school level and package it into a one-pager. Be persistent. If you have a PhD or MD, lean into it. “People look at you differently. They see you as an expert. Use that to your advantage,” explained Myles.

The event concluded with final thoughts from each panelist. Garg hopes engineers and scientists will approach uncomfortable topics like equity from a place of good intentions and respect. According to Garg, you are bound to make mistakes, but being well-intentioned will help you overcome them. Warren advises anyone interested in local engagement to seek out groups that are already working on topics you care about. Furthermore, Warren emphasized you should always partner with the community and strive to understand their needs from the bottom up, not top down.

Equity
ESAL Events
Outreach
Engineers & Scientists Acting Locally (ESAL) is a non-advocacy, non-political organization. The information in this post is for general informational purposes and does not imply an endorsement by ESAL for any political candidates, businesses, or organizations mentioned herein.
Published: 07/8/21
Updated: 02/7/22