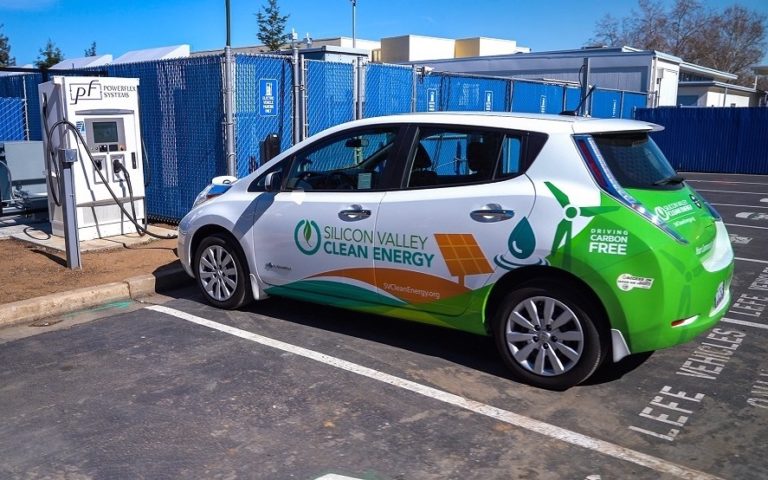 Electric vehicle deployed by Silicon Valley Clean Energy.
Our "Stories from the field" series shares the experiences of engineers and scientists who are making a difference in their communities.
Share this article

Aimee Bailey is the director of decarbonization and grid innovation at Silicon Valley Clean Energy — a public agency that brings clean electricity to Santa Clara County in the San Francisco Bay Area. She studied materials engineering and received her Ph.D. in condensed matter physics, but a growing interest in climate change spurred her transition into energy policy. Subsequent stints at the federal and international level eventually led her to the local utility sector. She now leads a portfolio of electrification initiatives, while supporting the agency’s effort to procure electricity from renewable sources like solar, wind, and hydroelectric power.

Bailey: Our organization was formed to address climate change. We’re a government agency that was established in 2016 by 13 local jurisdictions to tackle this challenge. The first way we do that is by procuring clean, carbon-free electricity for the communities we serve, which has lowered our carbon footprint by 20%. The second goal is to electrify everything.

LZ: What are you working on now? 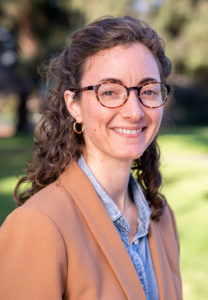 Bailey: Procuring clean electricity is our key service, but to achieve deep decarbonization at scale requires electrification of the transportation and building sectors. I’m in charge of those steps, specifically initiatives for infrastructure electrification and grid integration. My role is similar to a chief innovation or chief sustainability officer, where I lead strategic thinking among internal stakeholders. Part of this involves planning and goal setting, but a lot of it is just execution. My team designs customer programs to help folks transition from fossil fuels and to provide incentives, for example, to adopt electric vehicles or efficient heat pump appliances. There are a lot of technologies out there that aren't yet commercialized but are extremely promising. I focus on piloting these new technologies, new business models, and new policies with our member cities.

LZ: What are some specific projects?

Bailey: I led the development of our Decarbonization Roadmap, which sets emissions targets through 2030 and serves as an action plan for how we intend to achieve them. We developed this roadmap in conjunction with our stakeholders, environmental advocates, city staff, and industry experts who participated in a design charrette to arrive at these documents. We are now in full implementation mode.

I also helped form a coalition of public electricity providers in both Santa Clara and San Mateo Counties. There are a total of five providers, including Silicon Valley Clean Energy, across those two counties. We submitted a joint letter of intent to the California Energy Commission and received a block grant for $33 million, which turned into a $60 million regional project after aggregating co-funding. This grant will provide incentives for electric vehicle (EV) charger deployments. Over half the funding is going into direct current (DC) fast charging stations, and the other half is going into workplace “level two” charging stations. The result will be very tangible. It’s going to be a lot of chargers, and it was really the coalition building in the beginning that enabled us to get a large amount of state money.

LZ: How did you make the transition from condensed matter physics into policy?

Bailey: Growing up and throughout college, I wasn’t interested in policy at all, but I had since become increasingly interested in climate change. It became especially evident when I moved to London for my Ph.D. When you live abroad as an American, you are confronted with politics. I went through a personal process to understand my own identity as it relates to my nationality, and I was coming to terms with things happening politically and how they intersected with science. During that process, I started gravitating towards policy as a mechanism to advance clean technology.

LZ: After your Ph.D., you served as a AAAS science and technology policy fellow. How did that experience influence your career path?

Bailey: The AAAS fellowship was my main vehicle to get a taste of what it might be like to leverage my technical skill set in the policy realm and to understand whether I could be more impactful. And I loved it. With the energy sector, there’s a big technology component, but also a big policy element, and you can’t ignore the economics. So it’s a neat cross-section. I was at the U.S. Department of Energy for two years in the solar energy technology program. I've been in the energy sector doing policy-related work ever since.

LZ: Did you consider staying in policy at the federal level?

Bailey: I did consider staying longer, but at the time I realized I didn't have a good understanding of energy in the global context. I received a Henry Luce scholarship and decided to go to Beijing for a year. For context, if you’re familiar with the solar industry, at this point in 2010 to 2012 the entity that was having a lot of impact was actually the Chinese government. They were investing heavily in manufacturing and making solar more accessible through cost declines.

The fact is we are really interconnected and can’t ignore things happening in other countries. I had also never been to Asia before and it seemed like a good opportunity to understand a continent that I knew very little about, but was playing an important role in helping the entire world adopt clean energy.

LZ: After your experience at the federal and international level, what was your motivation to get into local policy?

Bailey: I’ve been at utilities effectively since coming to California. Part of the appeal was to be more boots on the ground, and it turns out I like it a lot. When I moved to California, it was during the Obama administration. There were still things happening at the federal level, but, certainly now, a lot of the leadership on climate change is at the local level. It makes sense not just because of the political environment, but because a lot of the drivers for achieving decarbonization, like building and transportation electrification, relate to authorities that local governments have. Local governments control the building code because they can modify and go beyond the state code. They also have some control over land use planning and infrastructure as well as the power supply through community energy programs like SVCE. There’s an appetite for leadership right now.

LZ: Which skills from your scientific training have been useful in your current work?

Bailey: Certainly, the analytical mindset and the critical thinking skills you hone as a scientist are really important. For my Ph.D., I had to be able to learn things very quickly: new subject matter, new code, new tools. Being flexible, and being able to learn new things on a quick learning curve is a meta-skill that is essential for local government work.

LZ: What advice do you have for other scientists and engineers who are interested in local engagement?

Bailey: Sign up for city council meeting agendas. If you want to know the types of issues your city is grappling with, or whether there might be an opportunity to leverage your skills, just looking through the agenda can give you a good overview. I typically will skim my city’s agenda to stay up-to-date. You may also want to check out advisory commissions in your city or county, and what their focus areas are. Attending a live commission meeting can help you visualize what it might be like to serve on one. [Editorial note: Many meetings have moved online during the COVID-19 pandemic, and can be attended remotely.

Engineers & Scientists Acting Locally (ESAL) is a non-advocacy, non-political organization. The information in this post is for general informational purposes and does not imply an endorsement by ESAL for any political candidates, businesses, or organizations mentioned herein.
Published: 05/24/20
Updated: 08/16/22