Scientists as Citizens: Aspiring to the Best of All of Us 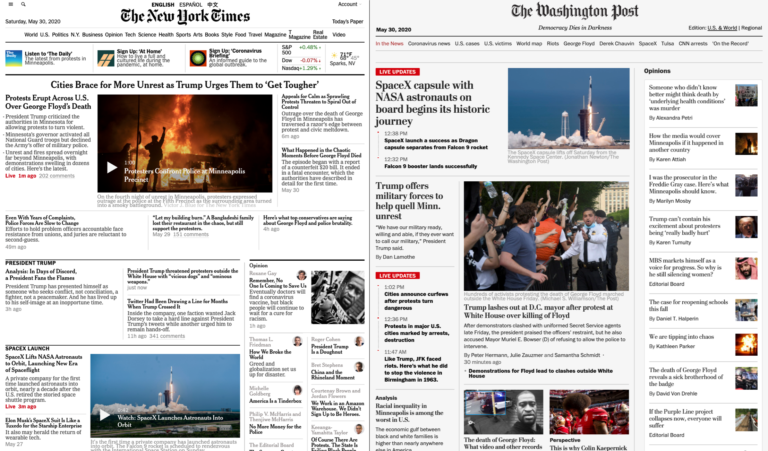 As an American who retains a childlike awe at the wonder of space and has a passion for civic engagement, the events of the past few days have evoked more emotions than I can parse. On this past Saturday, May 30, the landing pages of major newspapers showed the jarring juxtaposition of photos from the Dragon spacecraft launch next to images of American cities filled with protesters. The flames from the launch pad eerily echo the flames from fires burning in our cities, though they tell very different tales. One, of the boundless possibility of what humans can accomplish when we come together; the other, of the too often tragic consequences when we remain divided and fail to see each other’s humanity.

For me, trained as both an aerospace engineer and an astrophysicist, space was my entry point to the possibilities of science and technology. As a child, I devoured histories of the Apollo program, including accounts from astronauts who spoke of how seeing the Earth, in its entirety through the capsule window, helped them better understand our shared humanity. These stories inspired me to pursue a career in STEM, believing that science can be more than just a framework for understanding the physical world. It can be a tool to help unlock the best in all of us. But, over time, I also came to understand that science and technology can be perverted in service of agendas that support the worst of humanity. Just in the last century: science has been used to justify racism; scientists have experimented on unconsenting human subjects, including black Americans and European Jews; and technology platforms have been used to amplify hateful and violent voices. Many American universities that serve as incubators of scientific advancements, including my own graduate alma mater, have an unflattering history with the native communities that originally inhabited their grounds. My belief that we, as engineers and scientists, are obligated to confront this past and to participate in preventing its recurrence is a foundation to my commitment to civic engagement.

As I’ve noted before, engineers and scientists hold a privileged position in our communities. Non-scientists place a high degree of trust in our judgment to address problems in the public interest. For many Americans, this trust has been reexamined and renewed as scientists help them navigate the uncertainty wrought by COVID-19. But our civic responsibility does not end with our technical pursuits. Our training as scientists and engineers gives us unique approaches to using evidence and solving problems, and we can use them to make our communities stronger and better able to meet challenges.

To do that, we have to start by being members of our communities. By first listening to and valuing the perspectives and experiences of our neighbors. One of the pleasures in being part of ESAL is how often I hear stories of engineers and scientists doing just this. Whether it’s STEM students organizing to bring food to high-risk populations or PPE to medical workers during a pandemic, an ecologist tackling the legacy of redlining through community engagement, or an astrophysicist working to reform voting districts. When we engage with empathy, not just expertise, we can be part of solutions. Even solutions to problems whose seeds were sown centuries ago, when our country’s founding documents encoded the unscientific notion that some people, by virtue of their skin color, were less entitled to human rights than others. Our democracy, like science itself, has progressed significantly since then...but our work is not done. As you continue to process the events of these past few days, I urge you to remember that you have the power to help us all live up to the aspirations implicit in, though not fully realized by, Saturday’s launch.

For ideas about how to take the first step toward making a difference for racial justice in your community, please see our follow-up post: "Scientists as Citizens: Taking Action". For more information about local engagement, please visit our Local Engagement Playbook.

Equity
ESAL news
Engineers & Scientists Acting Locally (ESAL) is a non-advocacy, non-political organization. The information in this post is for general informational purposes and does not imply an endorsement by ESAL for any political candidates, businesses, or organizations mentioned herein.
Published: 06/2/20
Updated: 09/26/22

Computers with a Cause: Behind the Scenes with Tech Exchange
Scientists as Citizens: Taking Action
Moving from "Evidence-Based" to "Hypothesis-Driven" Policy-making
Cure Violence Global: Applying Public Health Methods to Violence
Local Government Perspective: Responding to COVID
Ecologist Spearheads Brownfield Redevelopment in Kentucky
Ensuring a Just Transition to Electric Vehicles in California
From Physics of Space to the Physics of Community Transportation
October 2018 Happy Hour: Engagement Tips from Scientists and Engineers
Building More Resilient Communities in the Face of Climate Change