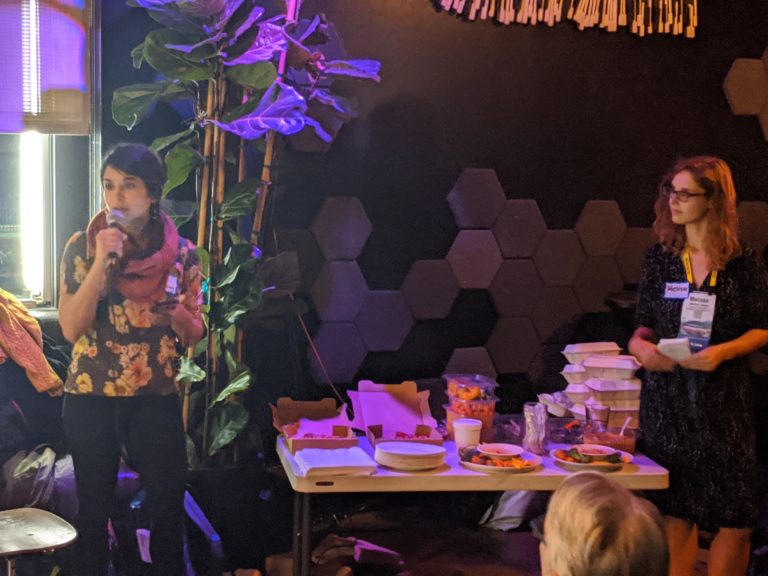 On December 10, 2019, geoscientists and policy enthusiasts joined for a Science & Democracy happy hour in San Francisco, a public event that coincided with the American Geophysical Union’s 2019 Fall Meeting. The event was organized by the Union of Concerned Scientists along with ESAL and other partner organizations.

Excitement from conference events earlier in the day spilled over abundantly into Oddjob — a quirky lounge with a discreet entrance on a grungy corner in San Francisco’s SOMA district. As rain pattered down, attendees trickled in from the American Geophysical Union (AGU) Fall Meeting — the largest of its kind for space and earth science. Many still wore their badges around their necks while some gripped tubes containing tightly-rolled research posters. They found lively conversation as cocktails flowed.

The Tuesday night happy hour was hosted by the Union of Concerned Scientists (UCS), a national organization that advocates for evidence-based policy, and was organized in partnership with ESAL, along with Engaging Scientists & Engineers in Policy and the Greenlining Institute.

Speaking for ESAL, Arti Garg discussed opportunities for impact in city, county, and state governments. These smaller governing bodies face challenging technical issues but often lack the expertise available at the federal level. She encouraged scientists and engineers to take advantage of the systems already in place, which allow anyone to attend city meetings and offer public comments, one of many ways for the motivated citizen to participate locally.

Melissa Varga, the community manager and partnerships coordinator for the UCS Science Network, had attended AGU’s annual meeting for the past six years. During that time, she’s seen political and civic action become trending topics in the scientific community and expected solid attendance at engagement workshops scheduled for the conference.

Addressing the geoscience crowd, Varga discussed UCS’s Science Rising campaign, which aims to ensure that STEM students are ready to vote in the 2020 elections. According to Tufts University’s National Study of Learning, Voting, and Engagement, STEM majors vote at the lowest rate out of all academic fields, a statistic that UCS hopes to change this upcoming election cycle.

Sona Mohnot, representing the Greenlining Institute, spoke about using data and storytelling to create environmental equity. Based in Oakland, CA, the Greenlining Institute combats the negative outcomes of “redlining,” a historical practice that prevented low income and minority communities from accessing economic services. Their collaboration with UCS led to a report on the health and economic benefits of electrifying California’s bus and truck fleets.

Meanwhile, Deborah Moore, UCS’s Western States Senior Campaign Manager, was there to collect signatures for a petition urging the California Air Resources Board to adopt a more aggressive timeline for introducing zero-emission electric trucks. The trucking industry, despite making up only 7% of vehicles in the state, contributes a disproportionate amount of carbon dioxide and pollutant emissions. A number of scientists at the happy hour responded by penning in their support.

This year, 2019, marks the Centennial of the American Geophysical Union and the 50th anniversary of the Union of Concerned Scientists. For more information on how to become civically engaged, please visit the Union of Concerned Scientists, the ESEP Coalition, the Greenlining Institute, and ESAL. For information on how to organize your own science policy happy hour, please see our guide.

ESAL Events
Engineers & Scientists Acting Locally (ESAL) is a non-advocacy, non-political organization. The information in this post is for general informational purposes and does not imply an endorsement by ESAL for any political candidates, businesses, or organizations mentioned herein.
Published: 12/16/19
Updated: 09/14/22

How Policy and Local Context Shape STEM Education
COVID Conversations: Tips for Scientists and Engineers to Communicate Science with Their Communities
Science, Technology, and the Vote: Securing the Integrity of Elections
#ScienceInAction Twitter Chat
Communication, Politics, and Science at AGU 2019
Getting Involved in City Government
Scientists as Citizens: Getting Involved in Local Government
Connecting Science and Art for Effective Community Engagement
Taking the First Step
#EngageLocal: ESAL Goes Live on Twitter