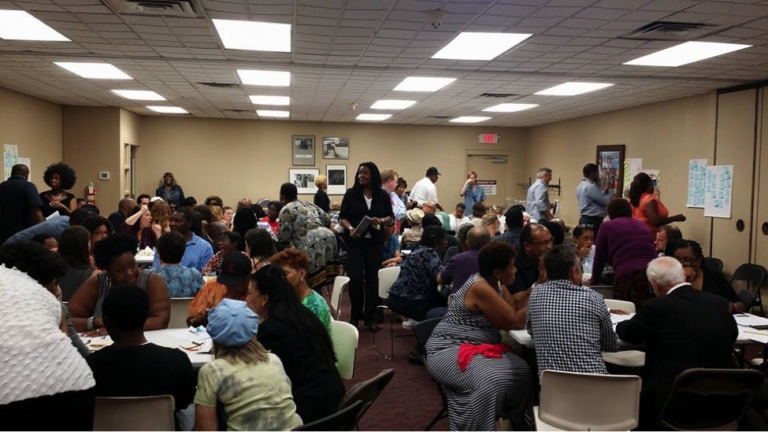 Community visioning session for redevelopment project Heritage West. Photo credit: Allison Smith.
Our "Stories from the field" series shares the experiences of engineers and scientists who are making a difference in their communities.
Share this article

Ecologist Allison S. Smith is the community engagement strategist and brownfields program manager for the Louisville Metro Government in Kentucky. She earned a Ph.D. in aquatic ecology from the University of Louisville, where she currently also serves as an adjunct biology faculty member. She enjoys teaching Biology Issues and Applications, a required course which covers topics such as climate change and sustainable agriculture. ESAL interviewed Smith on how her scientific background both motivates and informs the work in her community.

DR: When did you know you wanted to study biology?

Smith: I actually didn’t go to college until I was 25 years old and had wanted to be a veterinarian. At the University of Louisville (U of L), I interned with a graduate student who was doing research on blind cave fish. We went down into caves, wearing waders, carrying equipment, and kneeling in cold, muddy water. When we captured a fish, I knew I had found my path! I started studying ecology and went straight to graduate school.

DR: How did you transition to the policy arena?

Smith: I took a postdoc position in the U of L Center for Environmental Policy and Management. I got to work on water quality and sustainable urban development, via the Louisville Metro Brownfields Program. A “brownfield” refers to a site that has been contaminated or is perceived to be contaminated due to past use. I began to lead community meetings and found it rewarding to provide technical data, mediate conflicts, confront environmental injustice, and otherwise build community.

DR: So, the University of Louisville served as your incubator for discovering ecological research, then finding a way to apply it to local policy work. Have you ended up using your aquatic biology background in your job with the city?

Smith: At first, I wondered, “What am I doing here? That’s not what I went to school for.” But, I came to understand that the topic of your dissertation is not as important as the fact that you wrote one. The whole process ─ condensing, synthesizing, and making sense of a huge body of information ─ can benefit you in whatever industry you go into.

DR: How do those skills relate to your day-to-day job with the City?

Smith: I am often the only biologist at the table. Metro has recognized that my background in biology, including climate change effects on freshwater ecosystems, offers a valuable perspective. During our 20-year strategic planning, I was tasked with leading the Livability and Environment working group. We dealt with issues such as people living on urban streams that are channelized and contaminated. In addition, the ability to dive into a topic and make sense of it has served me well in every area I’ve worked in.

DR: What other skills have you found useful aside from your technical background?

Smith: Communication skills! We cannot afford to sit in an ivory tower and wait for information to trickle down. My postdoctoral experience taught me how to communicate in layman's terms. Technical conference talks are easier because you speak the same language, but going out into the community forces you to find an accessible way to convey your messages. Even a very complex scientific idea can be translated into something meaningful for people.

DR: How did you feel the first time you ran a community event?

Smith: During my postdoc, I prepared to lead a community meeting by making handouts and translating all this stuff. When I stood up there, I realized that the community members had a wealth of contextual and historical knowledge that I lacked. It was humbling; graduate school does not teach humility. We should never underestimate what a community has to offer.

DR: What program at Louisville Metro are you most proud of?

Smith: West Louisville is a disenfranchised community affected by redlining and other bad policies of the past. In that community there was a large vacant site, formerly the  National Tobacco Company. A nonprofit proposed building a food port at the site, a proposal that included cleaning up the remnant chemicals from tobacco processing and the nearby rail line. While it sounded like a great idea, the nonprofit started making their plans before doing community outreach. The result was a lack of buy-in from the community and ultimately, the project fell through. Because Metro owned the site, the failure forced us to rethink how to engage communities. Today, after significant resident input, that site is under construction and will house a multi-sports complex developed by the Louisville Urban League.

DR: What strategies for engagement resulted?

Smith: We partnered with the community for a visioning session, inviting them to share their needs and vision for the site. A subsequent call for proposals challenged bidders to present proposals in front of the community and answer questions. To a packed house of about 200 people, developers presented ideas, ranging from heritage gardens to a biotech research park. The proposal that won, after community feedback, was the Urban League’s indoor track and field facility. The area was branded “Heritage West,” and a billboard with artwork designed by a local resident was installed at the site.

DR: Did the community seem happy with the outcome?

Smith: As with any process, some people didn’t like the choice, but everyone knew that they had been part of the process. What we discovered was an alternative to the usual tired, public meeting where public officials say what is going to happen via PowerPoint slides!

DR: Do you share these positive models of practice with other city governments?

Smith: Yes. For example, this past summer, I presented our work for the International Association of Public Participation. Several years ago, I won a collaborative grant to evaluate community perceptions of Metro’s engagement. We are in the final year of community research based on surveys, interviews, and focus groups. It’s fascinating to look at how governance structures affect outcomes in local municipalities.

DR: What about your policy experiences do you most hope to convey to your students?

Smith: Students hear a lot of depressing news, such as federal rollback of a clean energy plan. So, I focus on what we are doing here in Louisville about issues such as climate change! We discuss how to move the needle locally, whether by planting trees or getting ready to adapt to climate change. I highlight successes, for instance our mayor signed on to the Global Covenant of Mayors from around the world to meet the climate goals of the Paris Climate Agreement.

DR: What would you say to other scientists about getting involved in local change?

Smith: It’s a culture shock to go from academia into government. Much of what we study in academia is esoteric. Working in local government has taught me to be realistic and practical. The work can be frustrating because there are many stakeholders ─ the mayor, Metro Council, residents ─ so things don’t always turn out just how you want. However, I get to participate in making visible change on the ground.

Engineers & Scientists Acting Locally (ESAL) is a non-advocacy, non-political organization. The information in this post is for general informational purposes and does not imply an endorsement by ESAL for any political candidates, businesses, or organizations mentioned herein.
Published: 11/24/19
Updated: 10/4/22