How an Oceanographer Pursues Research, Relevance, and Reach 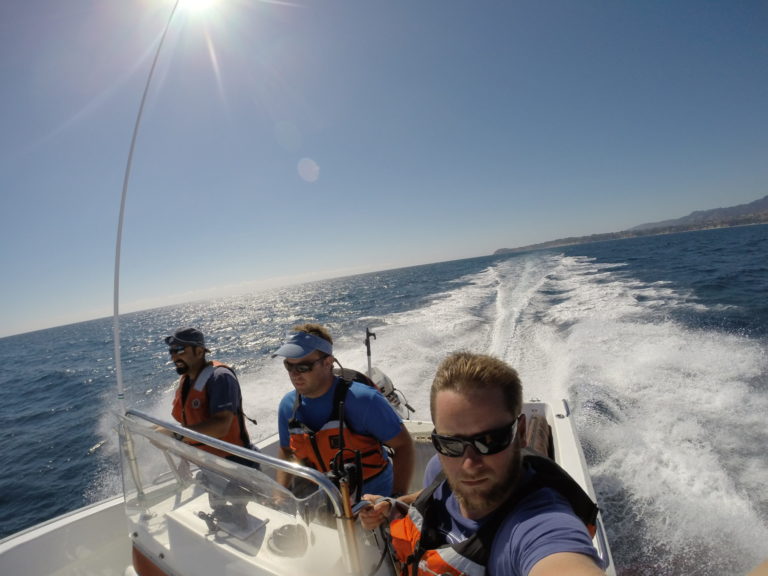 Doug George is a geological oceanographer at the Office for Coastal Management in the National Oceanic and Atmospheric Administration. He is the program manager for NOAA’s National Estuarine Research Reserve System Science Collaborative (NERRS Science Collaborative). Over time, he has worked on ocean science and policy issues throughout the west coast, including for the State of California and the Greater Farallones National Marine Sanctuary. George is both a professional scientist and a freelance science journalist, with articles published in a variety of media outlets. He received his Ph.D. in hydrologic sciences following dual master’s degrees in journalism and then oceanography. ESAL interviewed George about how he found synergy between writing and science in his dualistic career path.

DR: When did your interest in oceanography start?

George: I grew up in northern Los Angeles County, which is high Mojave Desert habitat with Joshua trees, desert sage, and yucca. But it was close enough to the ocean that my family went pretty often. I was always amazed and wondered what kept the massive pool of water there, since water just drains away in the desert. When I was 12, I went with my mom to Point Lobos near Monterey and something just clicked. I was blown away by the dynamics of the ocean and power of waves pounding against the rocks. In that moment I knew I wanted to study the ocean and understand how the cliffs were weathering the impact. I hadn’t heard of oceanography yet, but would quickly figure out what it was.

DR: Did you go on to get your undergraduate degree in oceanography, then?

George: Yes, but also in journalism – a dual degree. My advisor found out that I really liked writing and otherwise communicating science. He picked two books out of his bookcase. One was written by a great scientist who did groundbreaking work, but was not very well known. The other was written by a good but not great scientist who was really well known because he wrote a lot. My advisor guided me to realize that if you are able to communicate as a scientist, you’ll reach audiences in impactful ways. So, I became the oddball that was in both the Natural Resources and the Journalism Departments.

George: It was fun. I was one of the only journalism students who wanted to talk and write about science, any discipline. In contrast, none of my journalism friends liked the quantitative aspect of science, so they came to me with stories in forestry, chemistry, and even medical science. I became the science editor for the Humboldt State University “Lumberjack” paper. I thrived in that role because I got to interview members of the public and then write stories with vivid imagery, such as standing on the stream banks of a gravel mining operation. I became the go-to person for science articles and was excited about educating the public. 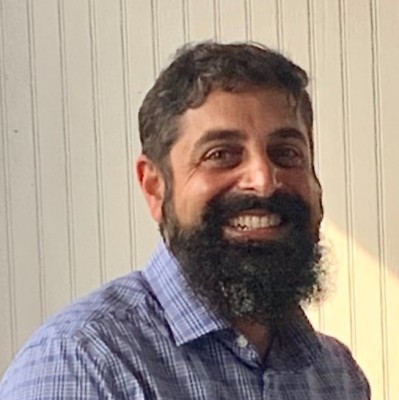 DR: What inspired you to want to get out of the ivory tower and educate the public?

George: Honestly, over the past 25 years we’ve had an explosion of science and technology that have fundamentally changed our lives, yet an erosion in the public understanding of science and quantitative information. Looking back to the early 2000’s with George W. Bush in office, the fossil fuel industry managed to turn what should have been a nonpartisan conversation about climate change into a super-politicized topic. And the result was a desperation in the scientific community, but a lack of tools.

DR: As you headed into graduate school in journalism, did you find that some of those tools were emerging?

George: Not exactly. It was fascinating that when I went to job fairs to talk to editors of newspapers, their eyes glazed over when they found out I wanted to write about science. As Columbia University kicked off a science communication effort around climate change, it was a heavy lift because of the media’s resistance. The people who created and guided the press did not appear to want an institute at Columbia telling them how to get their reporters talking about science. This divide is so systemic that it does a disservice to science reporting, which is viewed as something tangential to the main news. DR: It sounds like you are engaging a suite of skills – both right and left brain – in your pursuit of your goals around science.

George: I think that’s because I’m very curious, which drives me to examine things in a nuts-and-bolts way as well as figuring out broader meaning. For example, looking out my window at the moment I see bees flying around a bush. Technically, I know they’re pollinating, but I also notice that they’re also moving in mesmerizing, artistic patterns. I think I’ve always loved observation as well as its creative outgrowths like drawing and writing. All through college, I loved painting. When I’m in nature, I want to observe, understand, become part of it, and break it down to see how it’s working.

DR: How did your curiosity play out in your research postdoc at UC Davis in geological and physical oceanography?

George: I discovered that in addition to communicating science, in order to make an impact I needed to get to the table where decisions are made. Legislators typically don’t have the time to become experts in scientific areas, so they ideally turn for advice to people with the expertise. During my graduate school work studying patterns of ocean movement, I also became engaged in the policy aspects of science with the intent to communicate about science in decision-making spaces.

DR: Could you give me an example of what policy decisions became relevant to you?

George: Sure. The technology used to track ocean movements includes sensitive electronics like radar that have been collecting data for more than 20 years. This unique system of radar stations that was constructed by the state long ago is getting ravaged by ocean spray. Yet, it has been valuable to have more than a decade of data showing how ocean movements have reacted to marine heat waves, or during El Nino events. As the monitoring system degrades, we’ll miss data that relates to weather patterns, fire seasons, crab fisheries, etc. Advocating for sustaining the radar network required me to do the rounds with state legislators in Sacramento.

DR: What did you learn being in the room where decisions happen?

George: The biggest takeaway was that, while I was leading with the science, I had to find ways to make the science accessible and acceptable to the people I talked with. This meant finding the topics and words that would hold their interest. It’s easy for us scientists and engineers to believe that what we are each working on is the most important thing because we spend decades preparing in school, then dedicate our lives to it while surrounding ourselves with like-minded people. But legislators have to bounce daily from issue to issue, like from police funding to a water main break to library management. 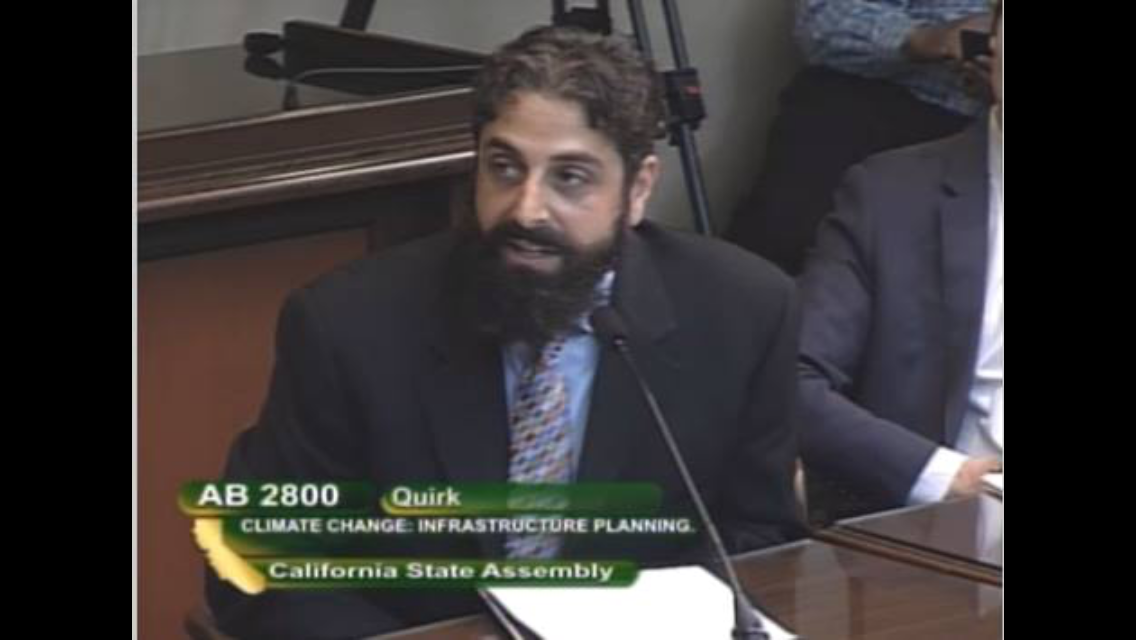 Doug George testifying to the California Legislature about climate change and infrastructure planning.

DR: What do you recommend in terms of ways to be effective in that setting?

George: I think the bottom line is to realize that legislators are thinking about their constituents, so you have to explain why they should care about an issue and how their constituents would benefit. There’s nothing wrong with the ivory tower. It has allowed for the creation of the world we live in. But our world was also built in the halls of congress and the legislature, in the city council chambers, in the decisions made at all levels of government. I encourage scientists, young and old, to step out of science for a moment and go to the places where decisions are made to listen to what the public is concerned about.

DR: Some people might argue that research requires full-time attention, leaving room for little else. How has your pathway strengthened you as a scientist?

George: The opportunity to merge the technical aspects of science and the actual application of it is what really ignites me now. In my current capacity with the NERRS, I work with almost 30 marine protected areas. The program I manage is all about bringing science into decision-making. It’s really exciting. Of course, there’s the mundane stuff like budgeting, but people look to the NERRS Science Collaborative as a model for how to bring science into decision-making in a way that gets people on board at the outset. It’s about scientists, decision-makers, and users coming together from the beginning and collaborating.

DR: The interdisciplinary path you have taken is forward-looking; what philosophy about making an impact guides your choices?

George: The philosophy underpinning my path is that to be a successful scientist you have to engage in the three R’s:

Engineers & Scientists Acting Locally (ESAL) is a non-advocacy, non-political organization. The information in this post is for general informational purposes and does not imply an endorsement by ESAL for any political candidates, businesses, or organizations mentioned herein.
Published: 09/28/21
Updated: 02/7/22

COVID-19 Deep Dive: Harnessing Volunteer Scientists for Community Response
October 2018 Happy Hour: Engagement Tips from Scientists and Engineers
Expert Guidance: The Connecticut Academy of Science and Engineering
Our Commitment to Justice, Equity, Diversity, and Inclusion
Biologist Steps Up to Empower Environmental Justice Communities with Data
COVID Conversations: Tips for Scientists and Engineers to Communicate Science with Their Communities
Dominican Immigrant Advocates for Sustainability in Michigan Food Systems
Transforming Political Campaigns with Technology
MCC: Knowledge Co-Production for Natural Resource Management
Computers with a Cause: Behind the Scenes with Tech Exchange