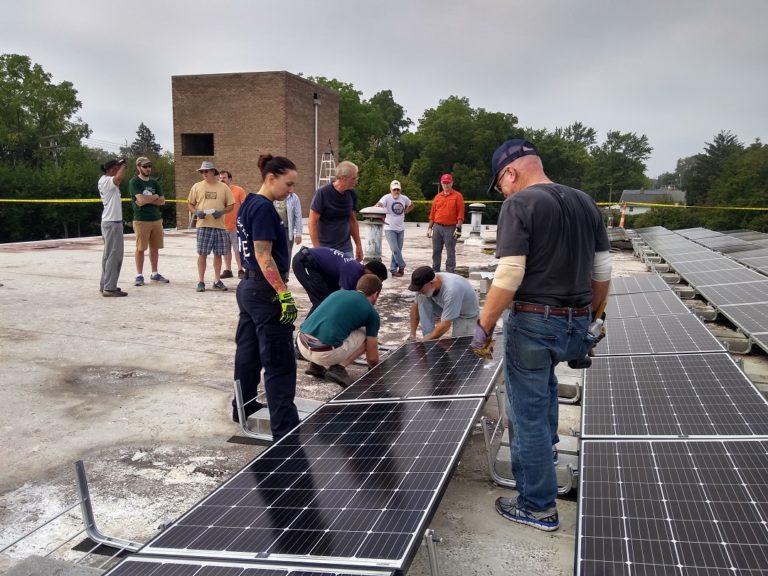 SolarYpsi volunteers installing solar panels on a fire station.
Our “Local STEM” series highlights local government and community initiatives and organizations in areas that relate to STEM.
Share this article

Dave Strenski’s passion for solar power began as an accidental hobby when his local food co-op needed help with a panel installation. That first project quickly evolved into SolarYpsi -- an ongoing collection of solar projects in Ypsilanti, Michigan. Strenski works as an engineer at supercomputer company Cray, but spends his spare time helping community organizations and households acquire solar power, usually at low or zero cost due to creative financing and volunteer labor. Over the past 14 years, SolarYpsi has forged key partnerships to build renewable energy infrastructure and has been featured on various media outlets, including in a commercial for Google Search and a TEDx talk. Their work has transformed Ypsilanti into a “solar destination” with over one megawatt of solar generating capacity.

LZ: How did SolarYpsi get started? 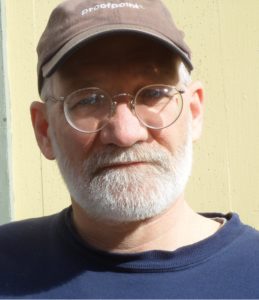 Strenski: I was helping out at the local food co-op doing some electrical work and the manager there said, “we should look at solar for the roof.” I poked around on the web and found an opportunity to win a grant. We wrote our first proposal and won $6000. It was a fun technical challenge more than anything else. I worked with a local solar contractor to buy parts. Then I got some friends to help put them up on the roof. As part of the grant, we were supposed to make a presentation to the public about what we did, which quickly got traction. People liked the presentation and I became known as the “solar guy” in town. That's how this thing started snowballing.

LZ: How does SolarYpsi operate?

Strenski: Since 2005, I've given 230 solar presentations and reached about 5,000 people face-to-face. Our primary activity is educating. I’m also constantly instigating projects and finding opportunities. I've learned that you never know when funding is going to happen, so I always have several projects in my pocket where I've already talked to the owner. Maybe I already have their electric bills, and I've scoped out the design and how many panels they would need. Then when a donor comes along, it’s all ready to go.

LZ: SolarYpsi is not incorporated nor a registered nonprofit. How does SolarYpsi receive and direct money into projects?

Strenski: We’re nothing more than a website and a group of friends. We’re instigators. One night during the summer, five years ago, an anonymous donor called me and said she wanted to give $75,000 to SolarYpsi. I had to tell her I can't take your money because I'm not an organization, but that's when I came up with the idea to find six nonprofits in town. I designed the systems and bid them out together to get a group price. Then, instead of the donor writing one check to me, she wrote six checks to the nonprofits. It worked out perfectly. When I look at it afterwards, it was the best model because there was no overhead. We did a school, two community centers, a health center, a library, and a city building. The nonprofits all loved it because they didn’t have to do any work at all.

LZ: What other notable projects has SolarYpsi worked on?

Strenski: City Hall was interesting, because it took us three years to do since it's a historic structure. The fire station was another success. The fire station project had 176 panels with a dozen volunteers ranging in age from 17 to 70. We installed it in just 8 hours, one day. It was like an Amish barn raising. You have older people downstairs making lunch and little kids running around. The more-fit people are up on the roof or ladders handing up parts. It was such a feeling of community. City workers were hauling up panels with their front end loaders and the firefighters were putting up panels with their bucket truck. To make it all legal, we hired a solar contractor to wire power to the building. Three years later, the fire chief realized he had saved thousands of dollars and decided to go 100% solar. We bought another 52 panels and got another group of volunteers, who completed the second installation in four hours.

LZ: The Federal Solar Tax Credit, which is worth 30% of the system cost through 2019, will drop off so that by 2022 there will no longer be a tax credit for residential solar. How do you see this change impacting solar power in Michigan?

Strenski: It's funny. This past year, because of the tax credit people have been going gangbusters getting solar. But my main thing is to put panels on roofs. I try to focus on that and I think it works, because when I did it in my neighborhood, very quickly my neighbors did it as well. I'm convinced they walk past my house everyday and say, “I have to do this too.” It’s like a billboard. We need more grassroots people and more houses with solar power to influence their neighbors. Then we have more solar voters because they all have it on their roofs.

LZ: Why do you think SolarYpsi has been so successful and well-received by the community?

Strenski: I’m a lucky guy. And I don’t say no. I get calls and emails and I just try to answer everybody’s questions. I got lucky in that I have a friend who is hosting our website for free. I got lucky again in that a kid from the local university created the website and we had an early web presence. We have a good story because we’re this post-industrial economically depressed town, like a mini-Detroit. It helps that the news is constantly filled with climate change and global warming, so we’re the right group at the right time. What also makes it work well is we have a friendly local government who wants to do stuff and not get in the way. The city loves me because I’m saving them money hand over fist. I was able to sell the co-op’s renewable energy credits to the power company so they could buy more panels. I sold City Hall’s credits and handed the city a check for $3,000.

LZ: What’s next for SolarYpsi?

Strenski: My next project is already in the works. I want to put solar on 100 low-income homes. We have a section of Ypsilanti called a Neighborhood Enterprise Zone, where the median home value is less than $80,000. I’ve found the right person in the city to work with. We filtered the addresses in this area for owner-occupied and for federal Opportunity Zone, which gives an additional tax break. Then we put those addresses through Google Sunroof to obtain a solar score and find the top hundred sunniest roofs. That's the list I want to put solar on. And we’re going to do it for free. I need one million dollars, budgeting $10,000 per house. I'm working with a solar contractor to monetize the tax credits and depreciation, and do all the homes together to get the price down. Once the solar is installed, it’s like putting $50 into every one of those households’ pockets each month for the next 30 years. How cool is that? By not having to pay the electric bill, they'll have extra money to go to the local store and buy another gallon of milk.

LZ: Would you call this your grassroots economic development plan?

Strenski: Yeah. Solar power today is going to median and upper-income people because they have the money, but people who need it the most are being discriminated against. Nonprofits and low-income households can't take advantage of tax credits, because they don't make enough money to pay taxes.

LZ: What advice do you have for other engineers or scientists who want to get involved in their community?

Strenski: My whole motivation is to just do it! Very early on, a friend told me about this green energy conference in Livonia, Michigan, about an hour away. I went and sat in this giant ballroom, looking at the ten people at my big round table. Everybody has driven an hour to get there and we're all listening to someone who flew in from California. We are so in the hole coming to this conference. That’s when the light bulb came on for me. I'm going to stop talking and just keep putting panels on roofs. That's my guiding light. Have a plan and do something.

SolarYpsi is looking for donations for its Ypsilanti 100 Solar Roof project, which will provide free solar power to low-income households. If you would like to make a donation or learn more about this project, please email Dave@strenski.com.

Engineers & Scientists Acting Locally (ESAL) is a non-advocacy, non-political organization. The information in this post is for general informational purposes and does not imply an endorsement by ESAL for any political candidates, businesses, or organizations mentioned herein.
Published: 01/12/20
Updated: 08/16/22