Scientists as Citizens: Getting Involved in Local Government 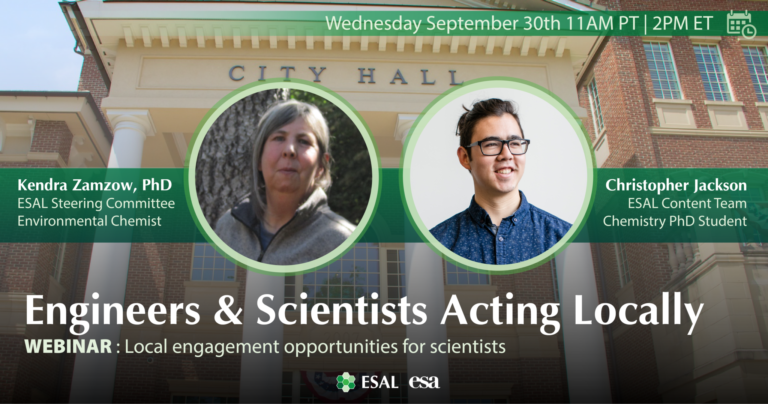 On September 30, ESAL and the Ecological Society of America co-hosted a webinar on “Scientists as Citizens: Getting Involved with Local Government.” The event featured ESAL volunteers Kendra Zamzow, an environmental chemist in Alaska, and Chris Jackson, a PhD candidate at UC Berkeley. Together, they made the case for how scientists can impact city, county, and state policy and presented time-tested strategies for doing so.

For successful models of policy advocacy, we look to Kathryn Kundrod and Mary Natoli, graduate students at Rice University, who led the effort to improve cycling and pedestrian safety at a dangerous intersection in Houston. At the borough level in Alaska, environmental planner Frankie Barker demonstrated how to use local ordinance to ensure clear fish passages. In California, our speaker Jackson himself has been studying how electric vehicle infrastructure can be designed to maximize social equity.

Government service typically requires a more sustained commitment, but one which comes with a commensurate amount of reward. Ecologist Allison Smith is often the only biologist at the table in her job overseeing contaminated “brownfields” for the city of Louisville, Kentucky. In Oakridge, Tennessee, engineer Robert Kennedy III plays a leading role on his city’s Environmental Quality Advisory Board. And in Washington, D.C. microbiologist Ian Simon started off as a neighborhood volunteer but has since become an elected local commissioner.

Scientists, of course, also serve key functions by providing expert guidance to policymakers. Philip Higuera, associate professor in fire ecology at the University of Montana, is one such example, who spearheaded workshops that brought together land managers and community leaders. Zamzow also presented two case studies she was involved with in Alaska: first, she served on a state technical working group advising on water quality in fishable waters; second, Zamzow helped assess the environmental risks of mining exploration activity.

Finally, for scientists out there who are ready to get engaged, Zamzow and Jackson highlighted the step-by-step guides that ESAL has developed as part of its Local Engagement Playbook. These guides walk you through how to advocate for policy in your state legislature or how to join a local board or commission, and more.

The takeaway from this webinar: motivated scientists can have a large impact at the local level.

A recording of the webinar is available through the Ecological Society of America.

ESAL Events
ESAL news
Engineers & Scientists Acting Locally (ESAL) is a non-advocacy, non-political organization. The information in this post is for general informational purposes and does not imply an endorsement by ESAL for any political candidates, businesses, or organizations mentioned herein.
Published: 10/26/20
Updated: 09/14/22