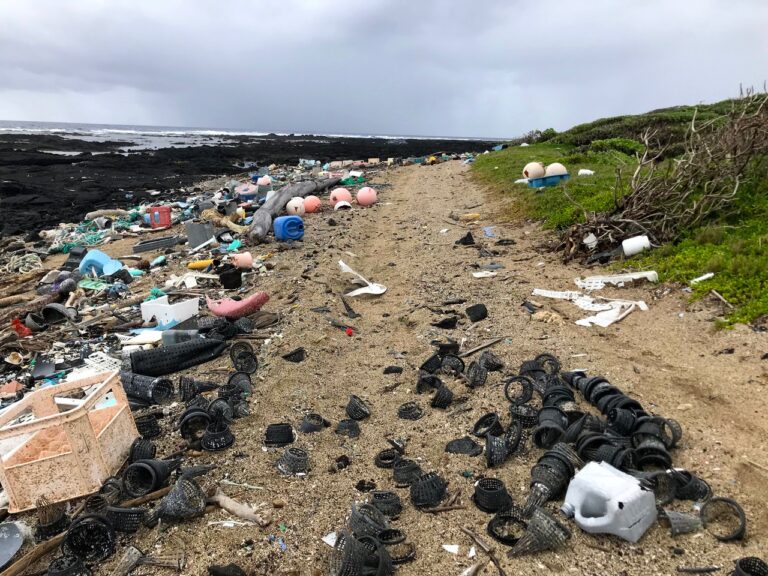 Plastic pollution at Kamilo Point, Big Island, Hawaii on February 14, 2018. Photo credit: Sarah-Jeanne Royer
Our "Stories from the field" series shares the experiences of engineers and scientists who are making a difference in their communities.
Share this article

Sarah-Jeanne Royer is a research scientist for Hawai’i Pacific University and an oceanographer for The Ocean Cleanup, and studies how different types of microplastics degrade over time in the varying conditions they encounter in the marine environment. Royer has worked to raise attention to ocean plastics through Sustainable Coastlines Hawaii and other NGOs. ESAL spoke with Royer about her hands-on work to curb plastic pollution while researching the environmental trajectories and consequences of ocean plastics.

DR: When did you first get interested in marine biology?

Royer: I grew up in Canada near the coast. My mom raised me to care about the environment – for animals and nature. One uncle was very science-focused and made me read a science journal article every week. The other uncle built a small cottage in a secluded area by the sea. I spent all my summers playing in the ocean, leading a minimalist lifestyle.

DR: Did you know, when you bonded with the ocean, that it would remain central to your life?

Royer: I knew pretty early on that I wanted to dedicate my life to helping the ocean. First, I got a technical diploma and certificate in marine biology and spent summers working as a technician. Through internships and volunteerism, I worked with whales for months, worked with sea turtles in Costa Rica, worked on salmon in Chile, and even worked in Africa in Mali. There, I was working on desertification, but kept getting drawn back to the sea. I realized that if I wanted to make the difference I cared about most, I needed to go back to university to research marine biology and oceanography. DR: I noticed that your university training has been global! You have two master’s degrees, one from Canada and another in association with a Brazilian University.

Royer: Yes, I have a master’s in marine biology at Laval University (where I also got my bachelors) as well as a master’s in international ecology from a Brazilian University in a program affiliated with University of Sherbrooke in Canada. After my first master’s degree, I looked into scholarships to get a Ph.D. but aimed too high. I wasn’t awarded any, and was so disappointed that I enrolled for another master’s in Brazil. Fortunately, while in Brazil, I received four offers from Ph.D. programs.

DR: Where did you decide to go?

Royer: I had heard great things about a program in Barcelona, so I conducted my Ph.D. at the Institut de Ciències del Mar in Barcelona, where I studied the production of the gas dimethyl sulfide by marine phytoplankton and its potential role in climate cooling. And while in Barcelona, I was confronted daily with the problem of plastics pollution. Tourists would leave trash behind, and the tide would bring this trash into the ocean. I started a Run and Care group, where we would stop to pick up trash as we ran.

DR: When did you realize the huge magnitude of the ocean plastics problem?

Royer: I would say that it was during one of the many research cruises from Barcelona. I was onboard to study ocean gases, but other researchers were sampling for plastics every day over the side of the ship. And I found a way to add to the data by putting a filter on the water being pumped through the ship. When I returned to Hawaii for a postdoc at the University of Hawaii, I planned to keep studying ocean gases, but the plastics pollution issue kept haunting me. I became a volunteer science advisor with Sustainable Coastlines Hawaii, the biggest beach cleanup organization, to help coordinate trash pickups.

During my postdoc, I was inspired by work my colleagues were doing to look at methane production by marine organisms. Methane is a potent greenhouse gas, and their work was showing an excess of methane beyond what you’d expect the organisms to produce. They hypothesized that it was coming from plastic bottles used in their experiments. I became fascinated by what could be a really significant issue and begged my professor to allow me to change my topic to study the effects of UV light on plastics. At that point, what had been a side interest – marine plastics – became central.

DR: Was it worth making the change?

Royer: Absolutely. My research group found that the breakdown of plastics is a source of greenhouse gas emissions– both methane and ethylene - that previously went unreported. We were able to determine that a plastic called LDPE, used to make grocery bags, plastic wrap, and such emits the most, stimulated by solar radiation. As the plastic degrades, it exposes more surface area, which ramps up its greenhouse gas emissions. The problem will only intensify as we continue to use plastics.

DR: How do you address these problems from both a science side and a personal side?

Royer: On the science side, I want to influence policymakers who can regulate changes to manufacturing processes, but I also want to influence consumers. We should start with eliminating all single-use plastic products. Any single use item that we use for just a few minutes and discard are a problem. I find it so silly, given all the time and energy that went into creating them. Unfortunately, with COVID we took a step backward and started using more plastic items, for example from restaurants. We can only go one straw at a time, but the progress is slow. Actions must be taken faster, and every little action counts, but when will it be enough to make a difference?

DR: Do you have any advice about how to take those little personal actions?

Royer: We should all be conscious about the way we consume. Do we really need this new item in our house, or is it just the excitement of getting something? For example, I’ve been using only secondhand clothing for 15 years. I try to have a neutral wardrobe that doesn’t require tons of clothes, and to look for clothes made of natural materials. It’s the same for food or any product, that we should try to shop for just the amounts we need so that we generate less waste. There are also so many community organizations and businesses focusing on reusing waste to give items a second life. If you want to make a difference with this problem, there are many ways to get engaged.

Engineers & Scientists Acting Locally (ESAL) is a non-advocacy, non-political organization. The information in this post is for general informational purposes and does not imply an endorsement by ESAL for any political candidates, businesses, or organizations mentioned herein.
Published: 04/24/22
Updated: 08/2/22