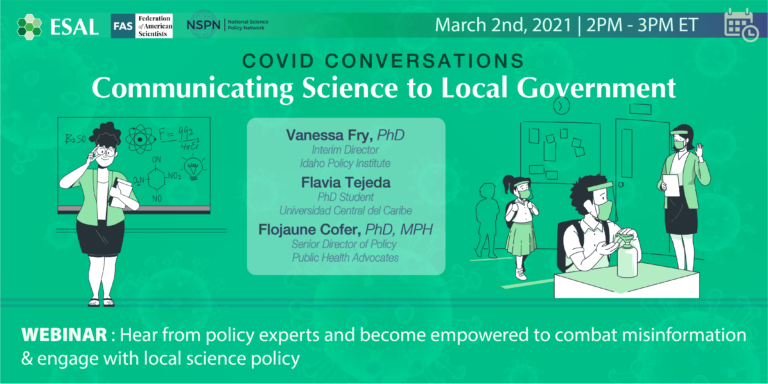 On Tuesday, March 2, ESAL hosted the second and final installment of ESAL’s Covid Conversations event series. This event focused on the theme of "Communicating Science to Local Government." With moderation from ESAL volunteer Rachel Burckhardt, three panelists with backgrounds in science and policy shared their learnings from the pandemic.

Panelist Flavia Tejeda is currently a PhD candidate in molecular biology at the Universidad Central del Caribe in Puerto Rico and an active member of the Puerto Rico Science Policy Action Network (PR-SPAN). She kicked off the discussion by emphasizing the importance of communicating scientific knowledge to the general public and to legislators. As Tejeda remarked, “what is science if we can’t communicate it” and get it into the real world?

In Idaho, Vanessa Fry witnessed the confusion around rapidly changing COVID-19 case data, which affected the state’s ability to make sound health-related decisions. Fry has a PhD in public policy administration and serves as the interim director of the Idaho Policy Institute, an independent think tank that she co-founded which is associated with Boise State University. Her team worked with Governor Brad Little to better understand the discrepancies in COVID-19 data reporting.

The third panelist, Flo Cofer, is the senior director of policy at Public Health Advocates, a statewide policy advocacy organization in California. With a PhD in epidemiology, she approached the pandemic with a public health lens and saw the impact of race and socioeconomic status as minorities became disproportionately affected by COVID-19. According to Cofer, this outcome was inevitable since the pandemic layered an infectious disease on top of an already inequitable foundation.

The panel discussed approaches to communicating effectively with one’s local government. As someone with a STEM background, Tejeda was able to go directly to peer-reviewed research, write concise summaries, and bring those one-pagers to her legislators. She encourages others with technical training to take advantage of their ability to read and translate scientific jargon as a way to offer expertise, even in areas outside of their own field of study. After initiating contact with policymakers, Tejeda advises to always “follow-up, follow-up, follow-up.”

Next, Fry presented a particularly useful framework of five typologies to identify different communication styles among scientists, arguing that ultimately, scientists and engineers should strive to act as an "honest broker" when contributing to policy discussions. The “honest broker” typology knows the science and has earned the respect to offer unbiased expertise while building consensus among multiple parties. The worst thing to do is to be a “stealth advocate,” or someone who operates with a hidden agenda.

Later in the event, the conversation turned towards vaccine distribution. In Idaho, Fry shared a survey from November 2020, which found that only 54% of Idahoans wanted to get the vaccine, reflecting the huge gap in public confidence at the time. To achieve widespread vaccine adoption, Cofer underscored the importance of building trust with communities, especially with historically marginalized groups. The key is to provide transparent information about the vaccine without forcing it upon people. “When people have their questions answered, they feel a greater sense of trust and comfort,” said Cofer. It also helps to offer communities a choice in which vaccine they receive, whether Pfizer or J&J, for example.

Finally, the panelists had this advice to share for how to get civically engaged. Tejeda recommended looking for and joining existing advocacy groups, such as the Union of Concerned Scientists or PR-SPAN, which is how she got her start in policy. There are also policy workshops and resources available at major scientific conferences. Fry pointed out the importance of paying attention to local nuances, since every state or region operates differently.

Cofer suggested joining a board or commission and to pay attention to local budget issues, either in an official or grassroots capacity. As her own example, Cofer wields influence by serving as chair of her local tax commission. She advises others who are not in an official decision making role to not give up. Even if you can only make recommendations, then “recommend as hard as you can.”

COVID-19
ESAL Events
ESAL news
Engineers & Scientists Acting Locally (ESAL) is a non-advocacy, non-political organization. The information in this post is for general informational purposes and does not imply an endorsement by ESAL for any political candidates, businesses, or organizations mentioned herein.
Published: 06/17/21
Updated: 02/7/22