Biologist Steps Up to Empower Environmental Justice Communities with Data

Monica Unseld is a biologist, environmental and social justice advocate, and founder of Until Justice Data Partners, located in Louisville, Kentucky. Her organization builds community capacity to use data as a powerful advocacy tool for social and environmental change while challenging narratives that have limited community empowerment. Prior, Unseld served as the director of community engagement for the Greater Louisville Project. She built her experience on the ground through grassroots environmental justice initiatives like Coming Clean and the Environmental Justice Health Alliance for Chemical Policy Reform. Unseld earned a Ph.D. in biology from the University of Louisville followed by a Master’s in public health from Benedictine University.

DR: When did you first get immersed in science and data?

Unseld: As a little Black girl, I was not expected to get a Ph.D. in biology. But I always had lots of questions for my parents, which annoyed them but never stopped me. My mother let me use the dining room as a lab for mixing things together. My dad sat outside with me, pointing out animals, and showing me that facts will reveal themselves if you sit patiently and observe. My mom bought me books and took me to the library, and I learned early on to be analytical. I love the fact that there’s always more to learn and we have to be humble enough to know when we need to change course.

DR: It sounds like you had a scientific mindset even as a kid. When did you become interested in public health?

Unseld: When I began encountering communities that needed environmental justice. At first, I didn’t really know about redlining. But I knew the worries that come with being Black in America – experiencing the racism and fearing that I could be discounted even if I was just as smart as others. Then, I went into communities that suffered from smoke and odors from industrial facilities right in their backyards or school yards. I heard horror stories about how local public health departments were dismissing residents’ concerns. Situating toxic waste sources in Black communities has been going on for decades, with the knowledge of both city and state governments.

DR: As you confronted these problems, how did you picture your role in making change?

Unseld: I realized that I could gather and provide data to make issues visible in local media, or to challenge the Mayor’s office or City Council when they make statements not based on evidence. I could help people find reputable sources, interpret them, and visualize the data. Just being able to get data into everyone’s hands is important because those who’ve historically had access to the data and controlled the dialogue have not made the necessary changes. 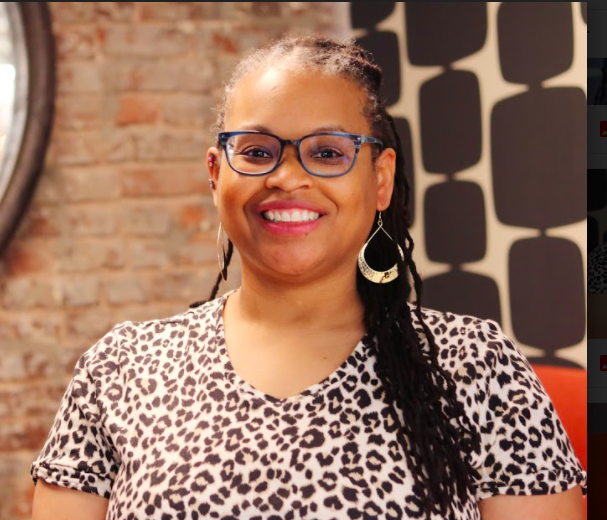 DR: How did your degree in biology shape your engagement in environmental justice?

Unseld: In my doctoral program, I studied endocrine disruption with Dr. Cynthia Corbitt and became aware of the impacts of environmental contaminants on animal health. She took me to the e.hormone conference, where I heard about the research of Dr. Tyrone Hayes on environmental hormone impacts on amphibians. I was excited to see scientists stepping up to speak against environmental contamination, to say “This is wrong.” When you have data and credentials, the ethical choice is to speak out. We have not been using our academic privilege in a way that is most suitable for the planet.

DR: Did this perspective shape the way you taught during your years at St. Catharine College?

Unseld: While I was teaching at the university, the 2010 DeepWater Horizon Oil Spill happened. I just took a break from the syllabus to talk about it. My class discussed why Obama was giving BP so many chances to patch the pipe when it was clear there was a major problem. Part of being a scientist is that you know when to reject a hypothesis – in this case that BP could stem the spillage. My students and I considered the politics that were standing in the way of actions that needed to happen. I also had the chance to speak about the power of questioning and how we can use the scientific method to push back against racist and oppressive systems.

DR: What drove you to get a Master’s in public health after your Ph.D.?

Unseld: When I finished graduate school, I felt quite panicked. I assumed I was supposed to go into basic research or to a liberal arts institution to teach. But I was not drawn to the publish or perish culture. That’s when I joined the board of the Kentucky Environmental Foundation and got immersed in environmental justice. I met with communities, did interviews, and analyzed the research. With credentials, I could be heard in a way that community members could not. And as a researcher, I knew how to look for reputable sources, and the ability to feed that information to people for their self-advocacy was valuable. The people in charge don’t want these communities to say the truths out loud.

DR: Who do you perceive as the people in charge that limit the conversation?

Unseld: They are the corporate policymakers, local and state government officials, and other decision-makers. Even philanthropic organizations have built wealth from wages stolen from people of color, and while they are renaming grants and resources to reflect Black Lives Matter, they still hold the reins. It’s like begging for crumbs back when someone has stolen your cake. The way the whole system is established is a problem. Organizations are putting out BLM statements, but making surface changes, despite the ongoing, serious public health concerns in Black communities. Where is the sense of urgency?

DR: Has this been a difficult path to take in terms of stirring up peoples’ emotions?

Unseld: Yes, and I know I’ve upset some funders here in Louisville by sharing data directly with communities – sending links to open access peer reviewed articles that they would otherwise not likely see. But let’s take crime, for example. The statistics that get reported are usually about gun and gang violence, trending towards people of color. When I ask for data on crime prevention, it’s hard to come by. But, as a scientist, you should be looking at all the data – on housing, public health interventions, art – things that make a community safer so that people don’t feel like they need to carry weapons. And the media should report that information too. Science teaches us a healthy skepticism, to not just accept what we’re told, but dig deeper.

DR: Where do you find the courage to tackle these hard questions?

Unseld: People tell me that I am blunt and direct, asking the difficult questions. But I feel that more people need to, and I find it liberating to just not accept what I read in the papers. Nationwide, the conversations about lead and other toxic chemicals, and even climate change, are looking at pieces of the puzzle. We complicate solutions by upholding systems that won’t challenge the status quo. As intelligent as our species is, we still don’t have great solutions lined up. If we had invested the same brain power that got us to the Moon, we could be much further along in terms of getting off fossil fuels, for example. Maybe I can help light a fire, increase the urgency.

DR: How do you think that fellow scientists can help boost the sense of urgency?

Unseld: I think that we need to get out of the lab and also realize that emotion is valuable in decision-making. As scientists, we don’t like to rely on emotion, but if you study the brain, it uses emotion as information in order to make the best possible decisions. We have these strict definitions of objectivity and professionalism, which basically tell us to discount the limbic system. We should know better. When you speak up, some people will not like you, and you should never go after anyone personally, but we can hold people and foundations accountable. Instead of counting how many people they’ve helped, let’s ask how many people have died.

DR: What’s your long-term vision for the work of your nonprofit, Until Justice Data Partners?

Unseld: I see us bringing data to the table on things like how having safe, stable housing affects a child’s performance at school. If I had a ton of funding, I’d teach communities how to do research, for example how to ask the hard questions. A community member should be empowered with the information to speak out when there is a factory behind their home and their child needs a respirator. This work is needed all over the world and I want to see it get done, whether under my organizational brand or not. It would be amazing if I could shut my nonprofit down within my lifetime, having built the capacity of communities to do the research they need to advocate for the public health they deserve.

Engineers & Scientists Acting Locally (ESAL) is a non-advocacy, non-political organization. The information in this post is for general informational purposes and does not imply an endorsement by ESAL for any political candidates, businesses, or organizations mentioned herein.
Published: 11/30/21
Updated: 07/27/22