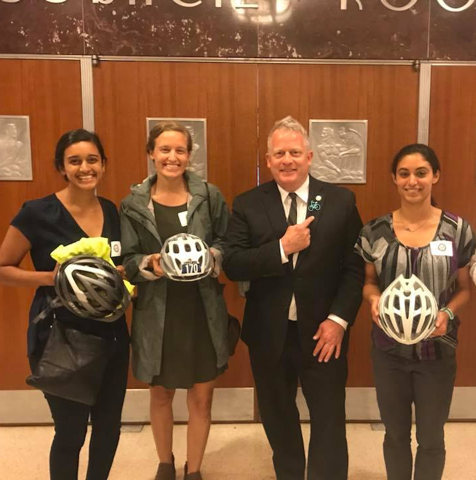 Kathryn Kundrod (left) and Mary Natoli (right) with friend Shannon Carter (middle left) and City Councilmember David Robinson (middle right) at Houston City Hall. (Credit: Kathryn Kundrod)
Our "Stories from the field" series shares the experiences of engineers and scientists who are making a difference in their communities.
Share this article

Kathryn Kundrod and Mary Natoli are Ph.D. candidates in the bioengineering graduate program at Rice University. They both work in Rebecca Richards-Kortum’s lab, which focuses on the development of life-saving technologies that can be deployed in low- and middle-income countries. Natoli works on low-cost ways to detect both HIV-1 drug resistance and sickle cell anemia. Kundrod works on ways to screen for cervical cancer in resource-limited settings. They both run and cycle as part Rice University’s Cycling and Triathlon Club. ESAL interviewed them about their advocacy for transportation safety around campus and broadly in the City of Houston.

DR: What inspired you to get involved with transportation advocacy? 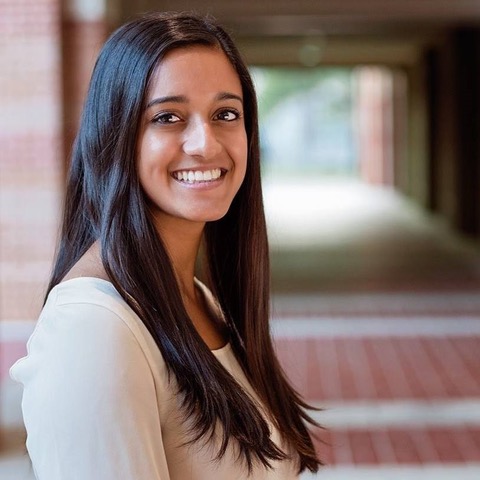 Kundrod: A few years ago, I got pulled over by the police for impeding traffic while Mary and I were cycling together. I had to go to several court appointments and navigate what turned out to be a confusing set of Houston traffic safety regulations, and Mary came along for moral support. It was a frustrating process that got us thinking about the laws and policies related to traffic.

Natoli: During that same year, there were a couple of cyclist deaths on our commuting route at an intersection on the corner of the Rice campus – a faculty member died, followed by the spouse of a postdoc. We got concerned about the interaction of cars, bikes, and pedestrians at that intersection.

DR: What was the first action that you took?

Natoli: We started attending city council meetings, making comments about our concerns, and getting to know other groups passionate about this subject. I then invited myself to a meeting of city leaders who were discussing the intersection, the corner of Sunset and Main. I was the youngest and most inexperienced person there, in terms of local government. Yet, I learned to put myself out there - the worst that can happen is getting turned away.

Kundrod: One of the things I have gained from partnering with Mary is to step out of our comfort zones. In that regard, Mary has been extremely brave and has inspired me to take action.

DR: How did the partnership emerge after that first city meeting?

Kundrod: Together, we started advocating for safer bike routes at city council meetings, eventually advocated more broadly for transportation safety at the state level and even health-related topics, which relates to our doctoral research. Mary has been a leader in creating opportunities for us to advocate for issues on which we are passionate and informed. 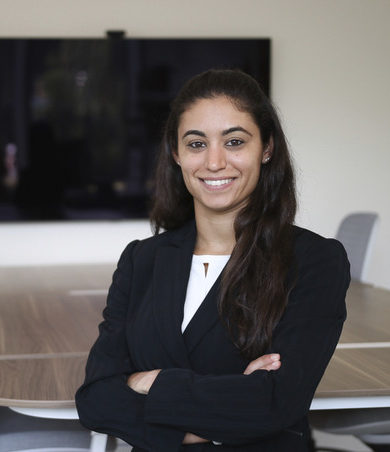 Natoli: Kathryn is analytical and methodical. You can always trust her inputs to a project. She is also great at interacting with people and more level-headed than I am. When conversations with opponents get frustrating or confrontational, I try to let her do the talking.

Kundrod: We trust each other in many different realms of our lives, professional and personal. We advise each other on approaches to take on everything from experiments to marathon training plans to advocacy.

DR: Do you feel that your scientific backgrounds help you with advocacy?

Natoli: Yes. The scientific method helps me discuss problems with city council or university administration. To make a case that something needs to change, you do background research and support your argument with evidence. While in science you present a hypothesis, in advocacy you present a problem.

Kundrod: Sometimes the data we collect doesn’t convince others, though. In one meeting with vocal opponents of the biking plan, they brought data with them as well. Their data was outdated, from the 1990’s. The discussion broke down around whose data was correct. We were unable to sway the opponents that our scientific framework was more appropriate in this case.

DR: Do your credentials as doctoral candidates in a technical field at Rice University give you any credibility?

Kundrod: Not necessarily - I would say people in Houston have mixed views on Rice students and whether we should have a voice or not on local issues. Rice has a strong reputation in Houston, but I think being a student can reduce the impact of our advocacy.

Natoli: I have learned to leverage any advantage, though, of being from Rice. Elected officials will at least give you a chance to engage and make them look good - always taking photos. Once you get in the door, I think you have to work harder as a student to be taken seriously.

DR: What data did you bring to the table regarding the dangerous intersection?

Natoli: The intersection in question has 10 lanes of vehicle traffic and two directions of light-rail traffic, so we characterized a lot of conflict points. We timed how long it takes to bike or walk across the intersection, which requires pressing two walk signals. We found that it was at least five minutes, and that signal timing favored cars moving efficiently, not pedestrians. Also, Houston had striped crosswalks for high visibility around schools, but not universities. This led to a set of specific recommendations for roadway design, signage, and signal timing improvements.

Kundrod: Mary understands bike infrastructure from a cyclist’s perspective, having biked across the entire U.S. Although she lacks formal training in the topic, she has first-hand knowledge of bike law and transportation planning. She also knows how to think critically and consult experts to be sure she is well-informed, so that her solutions are evidence-based. For this intersection, the plans she proposed were also heavily influenced by her daily commute on a bike. She combined first-hand experience and a wealth of relevant data.

DR: Did you all feel well-prepared to take on what sounds like a politicized issue?

Kundrod: I felt like we were well-prepared in problem-solving and thinking critically about a topic. We were not as prepared for the political aspects. The Houston City Council has some members whose primary focus is not the safety of all road users, including pedestrians and cyclists. Over time, we came to understand who opposed the sorts of changes we’re advocating for. We learned how to reach out to individuals and groups to rally support.

Natoli: With our scientific backgrounds, we were prepared to back up our claims with data. We were less prepared for what to do when people did not respond to data. For example, once transportation modifications were underway, I found out that a group of neighbors were meeting with construction managers to complain about 8 second delays to traffic flow. I slipped in and sat in the back. It was hard to listen to people who were not making the safety data primary.

DR: Despite the obstacles, do you feel that you two ultimately made a difference?

Natoli: Yes, the successes are incremental, but we celebrate each one because little changes will add up to making a difference. A contract was awarded to redo the crossings, including changing signals timing, putting in high visibility crosswalks, and closing off a traffic lane to reduce the complexity of looking for cars when stepping into the intersection. There has already been a lot of progress in transforming this intersection to be safer.

Kundrod: I don’t think changes would have happened as quickly or extensively without Mary’s leadership and our involvement. We really contributed to the group that put pressure on the city, on Rice, and on the Medical Center that’s adjacent to the intersection. Inaction was unacceptable after the two deaths. Our advocacy moved the needle faster.

Natoli: The changes also promote biking by helping people feel more comfortable. A couple of new “Drivers yield to pedestrians” signs have been put up. While yielding has always been the law, I see a difference in how people in vehicles treat us now.

DR: Has your advisor in your Ph.D. program been concerned about your civic engagement detracting from your research time?

Kundrod: To the contrary. Our advisor, Rebecca Richards-Kortum, has been very supportive. Rebecca has been an advocate on issues relating to maternal mortality, as well as for diversity, equity, and inclusion in STEM. We learned about advocacy by mentoring a group of undergraduate students in advocating to reduce maternal mortality in Texas as part of Rebecca’s “Advocating for Change” course. She gave us the courage to get involved. More broadly, Rebecca has inspired us to live well-rounded lives. She set an example and motivated us to train for our first marathons.

Natoli: Through our experiences as graduate students working in the lab and the community, we have realized that our perspectives are valuable. Building a coalition of support for whatever you want to achieve can help you figure out the right people to talk to and best steps to take.

DR: I think your collaboration is fabulous. What do you look forward to as a dynamic duo?

Kundrod: The biggest thing we are both looking forward to is finishing our Ph.D.s! We both plan to be in Houston for another year, during which we will stay engaged with local government on transportation and public health advocacy.

Natoli: We have more mini projects in mind, such as making videos about crosswalks. The first one I made got over 15,000 views on Facebook. We also hope to get involved more at a neighborhood level.

Engineers & Scientists Acting Locally (ESAL) is a non-advocacy, non-political organization. The information in this post is for general informational purposes and does not imply an endorsement by ESAL for any political candidates, businesses, or organizations mentioned herein.
Published: 03/22/20
Updated: 08/16/22