Science, Technology, and the Vote: Securing the Integrity of Elections 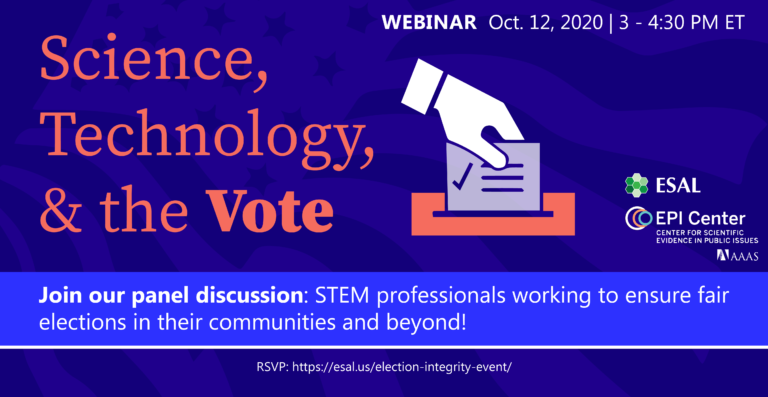 As we approach the beginning of November, the upcoming presidential election is on the front page of newspapers, as well as on the front of many Americans’ minds. On Monday, October 12, ESAL co-hosted a virtual panel discussion with the AAAS Center for Scientific Evidence in Public Issues which featured guest speakers who work at the intersection of science, technology, and the elections. I had the pleasure of moderating the event, where we learned more about the panelists’ work, and how science and technology can be used to help ensure the fairness, integrity, and security of the voting process.

Juan Gilbert, a professor in the Information Science and Engineering Department at the University of Florida, spoke about how he became inspired to get involved in election work during the controversial Florida recount in 2000. Since then, he has created a number of technologies to improve the voting process. For example, he and his lab built the first accessible open source voting system, called Prime III, which is now used for elections in multiple states. He’s also working on a number of designs that haven’t been implemented yet, but that could help to improve the accessibility and security of the voting process, such as video-based identification and remote voting systems.

Gilbert also explained the importance of paper ballots, and why voting can never be done completely online. He compared it to something like online banking, where we have the ability to confirm what happens on the other side, noting, “If I put a dollar in my account I can go verify the dollar actually showed up. In voting the intentional design is that you cannot have that connection. Your ballot is private. You cannot tie a human being to a ballot. It’s supposed to be completely anonymized.”

Jennifer Morrell, a partner at The Elections Group and a nationally recognized expert in election auditing, focused on her work with risk-limiting audits, or RLAs -- a form of auditing that takes into account how many ballots must be verified to achieve statistical confidence, based on the margin of error. She explained how RLAs work, and why they are important for detecting voting system errors, improving accountability, deterring fraud, and assuring that votes are issued, counted, and reported accurately. She also covered other types of audits that can help elected officials think about topics like resource allocation or the layout of voting equipment, which are particularly important this year to ensure safe and efficient elections during the COVID-19 pandemic.

Another important issue that Morrell touched on was the security measures that ensure the integrity of ballots submitted via dropboxes. These include an inspection process of the boxes themselves, as well as several steps of ballot verification using features like the signature, watermark or QR code, and even the size and weight of the ballot paper, which make them incredibly hard to fraudulently replicate. She emphasized that there’s no silver bullet: “It’s layers of security, layers of vetting, layers of review, and layers of validation that provide the integrity that the election.”

Thomas Beatty, a faculty member at the University of Arizona’s Department of Astronomy, spoke about his work on advocating for fair districting. Unlike the other two panelists, Beatty’s work on the election is something he does on the side of his professional career as an astronomer. He highlighted the important role that scientists and engineers can play in local government by bringing their technical expertise and perspectives to policy issues. He also discussed how people with STEM backgrounds can get involved without having to reorient their career. “Just showing up is a major part,” he noted.

His message resonated with many of the audience members, who wanted to know how they could get involved in election issues in either volunteer or professional capacities. The panelists brought up a variety of opportunities such as attending city council meetings, volunteering for a campaign, and reaching out to local election offices. They also discussed the growing need for skills such as data analysis, software design, project management, and even adult education.

As a final thought, Morrell noted that there will be a lot of lessons learned with this election, which will create an opportunity to bring in new people and new ideas. She expressed optimism that the next generation of students and young professionals can improve the voting process in the coming years, and help ensure that we “maintain this thing called democracy in a way that serves everybody, and in a way that we can validate or ensure the integrity of the process.”

A video recording of the event is available on YouTube. For more information, please see the links and resources shared by the panelists.

ESAL Events
ESAL news
Engineers & Scientists Acting Locally (ESAL) is a non-advocacy, non-political organization. The information in this post is for general informational purposes and does not imply an endorsement by ESAL for any political candidates, businesses, or organizations mentioned herein.
Published: 10/25/20
Updated: 09/13/22