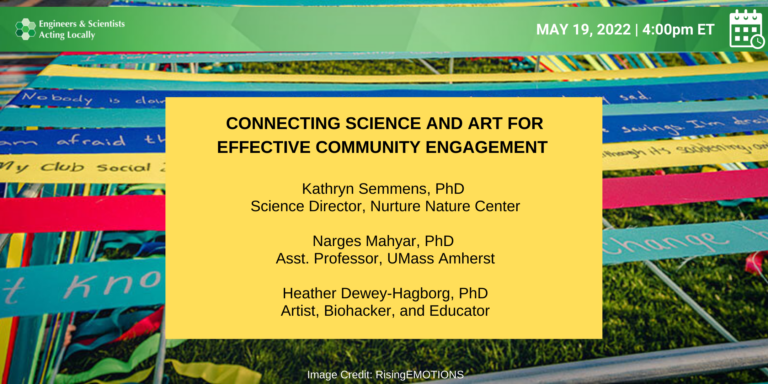 While art and science are often seen as disparate worlds, they share more in common than one might think. Both mediums are creative and tend to be open-minded, and together, the appeal of art and the rational nature of science can complement the other. These themes were on display at ESAL’s virtual event in 2022, “Connecting Science and Art for Effective Community Engagement.” The discussion featured examples of artistic-scientific collaborations presented by three panelists working at this interface.

Kate Semmens serves as the science director for the Nurture Nature Center, an environmental education center in Easton, PA that applies art and community-based approaches to learning. Semmens shared projects that have come out of the Center such as their CREATE Resilience program, which aims to raise awareness of climate change and develop a hazard mitigation plan by engaging youth and members of the community. One major output was the commissioning of local artists to create a set of 15’-long murals showcasing visions of a resilient future.

Fellow panelist Narges Mahyar is an assistant professor in the Manning College of Information and Computer Science at the University of Massachusetts, Amherst. Much of her research is interdisciplinary and lies at the nexus of visual analytics, human computer interaction, and social computing. Mahyar also has a fine arts background, which informs her passion for connecting art and science.

“By training, I’m a computer scientist, but by heart, I’m an artist,” said Mahyar.

Recently, Mahyar helped create a public art installation in East Boston called RisingEMOTIONS by working with artists and local residents who will be most affected by sea-level rise. The installation, located in front of the East Boston branch of the Public Library, is composed of colored ribbons transcribed with community comments. Each ribbon reflects a particular feeling towards the impending climate emergency.

The final panelist was multimedia artist Heather Dewey-Hagborg, who holds a doctorate in electronic arts. Her work has been shown internationally and held in various public collections. She considers herself a biohacker, who 20 years ago began a journey to dissect art, technology, and politics.

One of Dewey-Hagborg’s more well-known works is Stranger Visions, where she walked the streets of New York, her hometown, and collected artifacts of biological evidence such as discarded gum, cigarette butts, and hair. At a community biology lab, she learned how to extract and analyze the DNA and then used the genetic code to construct 3D printed portraits of these strangers who had unwittingly left traces of themselves. Dewey-Hagborg’s other work continues to explore hefty themes like genetic profiling, privacy, AI, and biopolitics.

All three panelists emphasized the significance of ongoing dialogue between scientists and artists. When they work in tandem, both groups often leave a profound impact on the other. From an artist’s perspective, Dewey-Hagborg explained that disagreement may happen, but can lead to productive results not to be shied away from. She advised that “scientists should invite artists as collaborators, not as a service.”

For Mahyar, art is a form of emotional expression with the ability to communicate science in a way that science alone cannot:

“Art is a universal language that everyone understands.”

Art
Environmental Science
ESAL
ESAL Events
Politics
Engineers & Scientists Acting Locally (ESAL) is a non-advocacy, non-political organization. The information in this post is for general informational purposes and does not imply an endorsement by ESAL for any political candidates, businesses, or organizations mentioned herein.
Published: 07/17/22
Updated: 08/2/22

#EngageLocal: ESAL Goes Live on Twitter
Communicating Science: Responding to COVID
COVES: Serving as a Science Advisor
Building More Resilient Communities in the Face of Climate Change
A PhD Engineer Giving Back to Her Alabama Community
Addressing Plastic Waste Through Local Engagement
Swimming Against the Current: Innovation in Water Technology and Policy
Computers with a Cause: Behind the Scenes with Tech Exchange
#ScienceInAction Twitter Chat
Science, Technology, and the Vote: Securing the Integrity of Elections