A CEELAB team working onsite for a conservation project.
Our “Local STEM” series highlights local government and community initiatives and organizations in areas that relate to STEM.
Share this article

The Coastal and Estuarine Ecology Lab (CEELAB) was founded in 1997 at the University of Central Florida (UCF) with a focus on the ecology of coastal and estuarine ecosystems, conservation biology, and restoration. CEELAB, along with collaborators and partners such as the Marine Discovery Center, the National Park Service, and several Florida organizations - the Coastal Conservation Association, the Fish and Wildlife Service, Department of Environmental Protection, and State Park system - have restored 93 oyster reefs measuring almost four acres. ESAL spoke with UCF Professor Linda Walters, CEELAB founder and lead, to learn more about restoration efforts.

RM: Tell me a little about your area of research.

Walters: Part of my role starting at UCF in the Biology Department was to be the director of a small field lab that the department had access to within Canaveral National Seashore. My main research area is in the Indian River Lagoon, which is an estuary system extending 156 miles along the east coast of central Florida. Because it's a big estuary with many problems, I have been able to work on numerous important issues from invasive species to algal blooms to microplastics to climate change since our start in 1997.

A lot of my work is restoration, in collaboration with the resource management specialists in Canaveral National Seashore. Early on, my collaborators in Canaveral said, “you have to work on oysters, Linda, because they're going away and we don't know why.” The first few years we methodically documented the decline in this oyster population. We found that since the 1940s, 43% of the oyster acreage was lost, which is pretty dramatic. We then focused on the causes of this decline.

It turned out the main cause was recreational boat wakes, largely because it's such a shallow lagoon, only one to two feet in most places. The boat wakes were dislodging oyster clusters from the reefs and washing them out of the intertidal zone. Once that process starts, it doesn’t stop. Our restoration was designed to reverse that trend. 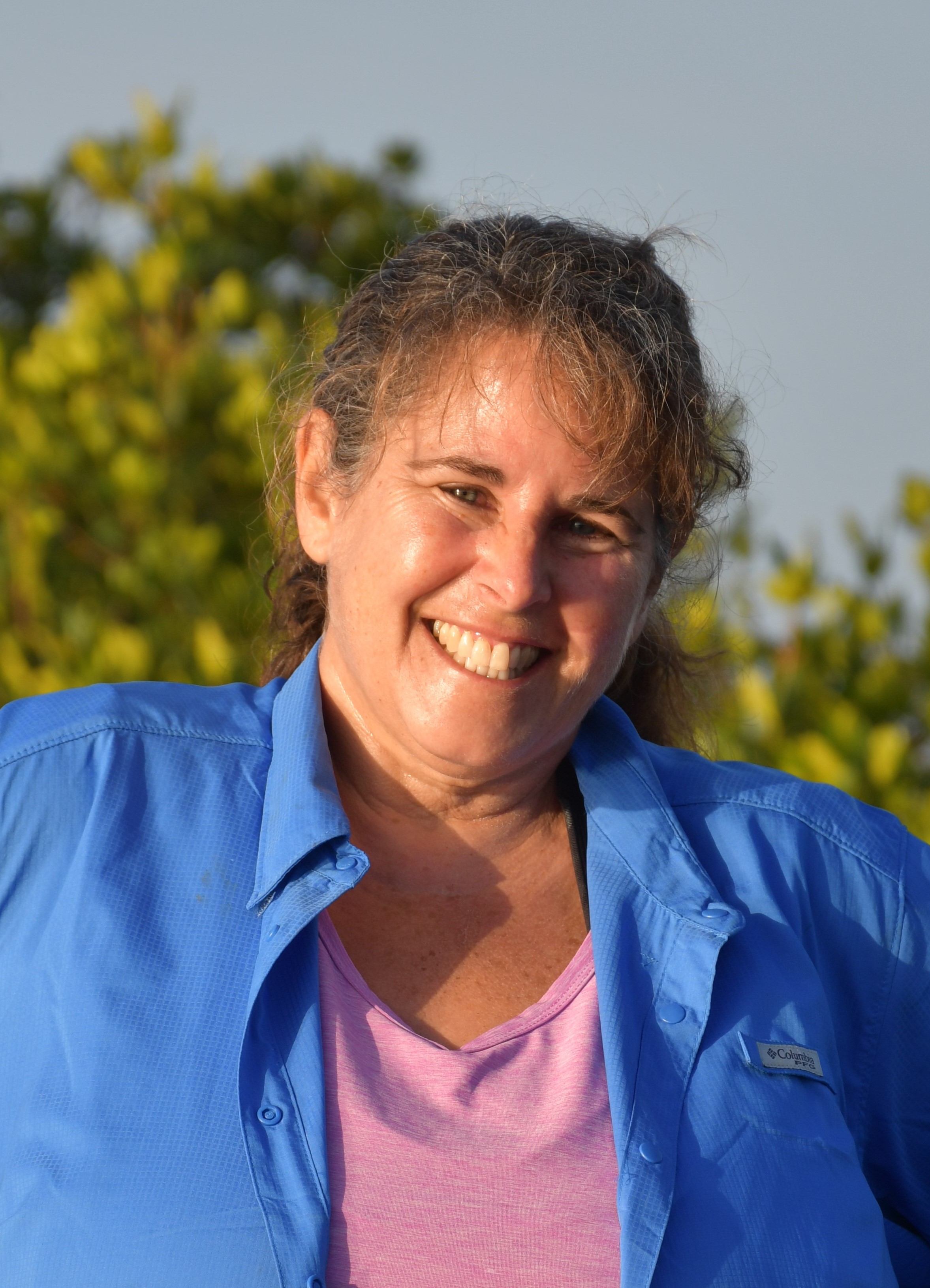 RM: Can you explain the process of oyster reef restoration, starting with site selection?

Walters: The dead areas in need of restoration were obvious on aerial photographs, and the piles of washed-up, dead, bleached shells can be up to a meter higher than the rest of the intertidal area. After we've identified a site and done preliminary surveys, making sure there aren't any live oysters that would be killed by the restoration process, we level the area back to the correct intertidal height.

Next, we deploy a substrate on which new oysters will “recruit.” We started out using a plastic mesh that had been developed for the aquaculture industry. For a number of years, we had thousands of volunteers help us make the mats, attaching oyster shells to the mats because larval oysters prefer to settle on oyster shells. The mats are laid out and held down with irrigation weights and cable ties, making a quilt-like pattern. In the last three years, as research on microplastics in marine environments has expanded, we transitioned our restoration to be completely plastic-free. We are now leading lots of projects looking at potential biodegradable materials for restoration. Not all the new materials are as volunteer friendly as traditional aquaculture mats, being either harder to make or involving cement or other chemicals.

Following installation, we can get back to natural oyster densities of approximately one thousand live oysters per square meter within two years. We've completed roughly four acres and we monitor regularly, including going back to the first reefs restored in 2007. The good news is that they're still looking as good now as they did when they were first deployed.

Walters: There're a lot of logistics - I've been told that's my superpower. We’ve had over 64,000 volunteers who've helped in addition to our collaborations with organizations like the Florida Department of Environmental Protection, Florida Fish and Wildlife Service, Indian River Lagoon National Estuary Program, non-profits, the county, and the city. The first stage of site leveling requires lots of people with picks and shovels breaking up the area because as the shells pile up, the shells turn into something akin to cement. One of our big partners is the Marine Discovery Center, a coastal nonprofit that works with local seafood restaurants to collect shucked oyster shells through the “Shuck and Share” program, and the collected shells are converted into new reef-building materials. Another critical partner is Florida’s Coastal Conservation Association, who have provided boat support to get volunteers and materials to the reef sites. Overall, we have people who collect the shells, drill the oyster shells, attach shells to the mats, transport materials to the park, deploy materials, and, finally, assist with monitoring. Basically, a city of people have helped with our oyster reefs. 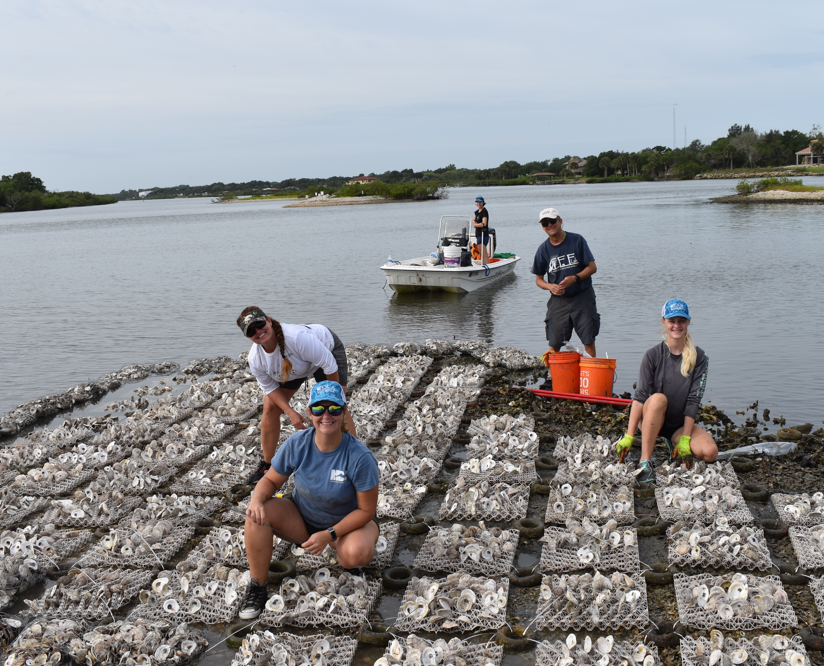 A team works to restore an oyster bed.

RM: What kinds of outcomes from your restoration work have you seen?

Walters: We've restored 93 reefs, and I've been there for every restoration. Whenever I go to a reef, I'm flooded with memories. The first year, we didn't know what we were doing. Now, we are good at anticipating everything that we can control. Weather and “lost” volunteers who don’t read the driving instructions, are now our main unknowns. Some sites we've restored a second time, removing the plastic and replacing it with biodegradable material. A reef will fail if hit by too many boats. We knew going into this restoration project that, even though boats and boat wakes were a huge issue in this estuary, there were not going to be any regulations to limit boating activity. We also knew that oysters are critical to this estuary and many others for the role they play in water filtration and protecting shorelines from storms. We needed to help the estuary by increasing oyster numbers before it was too late.

Restoration projects that last a minimum of five years are considered highly successful by many agencies, and we're at 15 years now in some locations. The average reef lifespan in Canaveral National Seashore seems to be a minimum of 12 years, with some of the older reefs getting rehabbed with non-plastic materials this summer. We have added substrate for roughly 30 million oysters to Mosquito Lagoon.

RM: How do you engage with your community through outreach?

Walters: Let me give you two vignettes. One is about storytelling through oyster yoga. I worked with a former student who was also a yoga instructor to come up with a series of yoga poses that represent marine organisms and processes in our area. We have mangrove pose, manatee pose, marshgrass pose, and of course, oyster pose. Moving through the poses, you can talk about the biology of the organisms and restoration efforts. We've shared the oyster yoga cards we made with thousands of people. What’s really fun is when we run big community restoration events, we always start with oyster yoga. It's been really effective to explain our goals for the day, get everyone warmed up and ready to help. This program, developed with NSF funding, has received lots of positive feedback.

The second vignette is our partnership with K-12 educators who grow mangroves for us with their central Florida classes. We take the teachers out in boats to the national park to collect mangrove propagules and show them how to grow mangroves. This wonderful group of teachers, some of whom have been doing this for 13 years, create a cohort of 1500-2000 students a year getting this experience. We give the educators the needed soil, pots, and kiddie pools for growing propagules in “mini estuaries.” We collect the seedlings each spring and keep them in our campus nursery for about two additional years. We deploy about 2,500 mangroves per year through restoration work and about 2000 annually are from these teachers. This partnership shares the workload, but more importantly provides young folks with the opportunity to actively participate in coastal restoration. 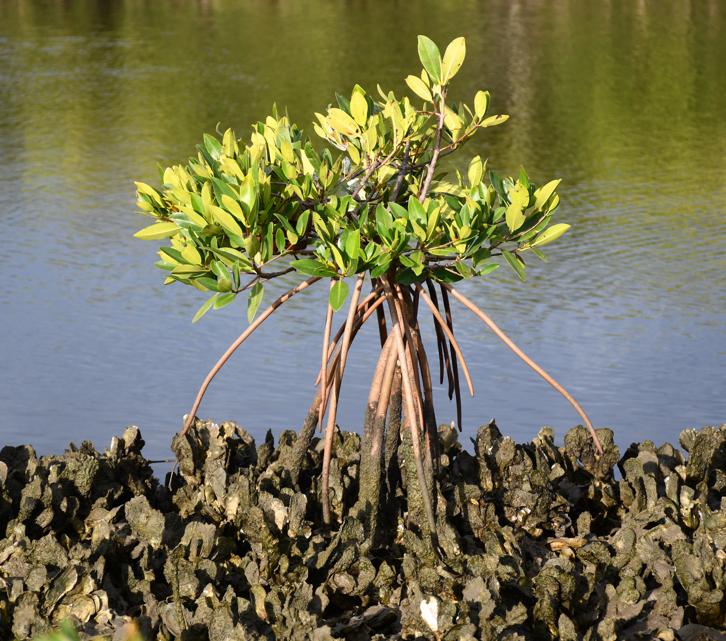 A mangrove plant on the central Florida coastline.

RM: What projects will CEELAB be working on in the future?

Walters: We've never run out of research questions to understand, conserve, and restore Canaveral National Seashore and the Indian River Lagoon. One example of a new project is our work on climate change and how that's impacting oysters. On one hand, the edge of the intertidal is changing with sea level rise. Higher waters are providing animals, such as boring sponge that weakens oyster shells, access to reef edges that they previously did not have. On the tops of these intertidal reefs, mangroves are now commonly found. This increase is a direct result of tropicalization and the reduction in the minimum winter temperatures creates a more tropical climate allowing mangroves to move further north. This poleward expansion of mangroves has been well-documented in salt marsh areas. Now, it is changing our oyster reefs in much the way it has already happened on the west coast of Florida. We're right at a tipping point where it's just starting to happen, and we’re seeing propagules on oyster reefs taking over. We don’t know all the snowballing effects of climate change, so there are a lot of questions to answer.

Engineers & Scientists Acting Locally (ESAL) is a non-advocacy, non-political organization. The information in this post is for general informational purposes and does not imply an endorsement by ESAL for any political candidates, businesses, or organizations mentioned herein.
Published: 10/8/22
Updated: