Curing Ballots in an Election 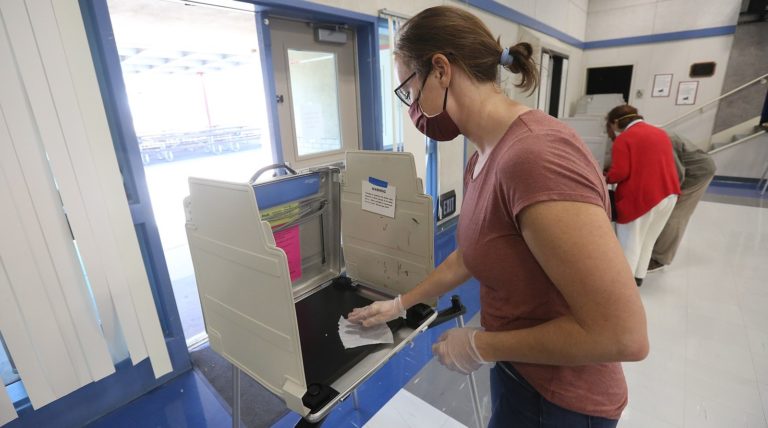 A California poll worker sanitizes a voting booth following its use at a Voter Assistance Center in Davis, CA during the 2020 General Election.
Our "Postcards" series shares the experiences of engineers and scientists who are taking early steps toward local engagement.
Share this article

Tell us about yourself.
I am a biophysicist who now works in science policy in Washington, DC. After graduate school I worked on health policy for a member of Congress as a AAAS Science and Technology Policy Fellow. Now I am a program officer at the National Academies of Sciences, Engineering, and Medicine.

What did you do?
In my personal time I was a voter protection volunteer for the North Carolina Democratic Party during the 2020 General Election. I was a member of their “ballot curing” team, which meant that I called voters whose mail-in-ballot had been rejected and helped them fix it. What happened?
I joined Zoom calls with other volunteers. At the beginning of each call, we were given instructions and training. We were then given contact information for the voters and a script, much like any other political phone bank. If the voter answered their phone, I explained to the voter what had gone wrong, and instructed them on how to vote in-person or how to mail in a new ballot. Because I was volunteering through the Democratic Party, we were only calling voters who were likely Democrats, but there are other similar efforts that are run by non-partisan organizations.

What did you get out of this experience?
This was by far the most rewarding election-related volunteering experience I have ever had. As a Washington, DC resident it can often feel like my vote in a solidly blue city is not very important in the Electoral College process. It was fun to help Democratic voters in a swing state cast their ballots. It’s also important to note that in the 2018 midterm elections in North Carolina, Black voters were twice as likely as white voters to have their mail-in ballot rejected. It was extremely gratifying to take an active role in fighting voter suppression by helping individuals make sure their vote was counted this year.

What is important to you about engaging with your local government?
Individuals can have an outsized impact by engaging in your state and local government, and the same is true for state and local elections. Even though most people focus on the Presidential election, many local elections were decided by very small margins. For example in North Carolina’s race for Supreme Court justice, where more than 5.4 million ballots were cast, the candidates were separated by only 400 votes. As of November 2, more than 15,000 ballots had been cured across the state! It’s clear that ballot curing efforts can decide the outcome of an election.

Will this experience have any influence on your work or your future engagement with your community?
I am hooked on this work. In fact, I am now volunteering for similar efforts for the runoff election in Georgia!

Engineers & Scientists Acting Locally (ESAL) is a non-advocacy, non-political organization. The information in this post is for general informational purposes and does not imply an endorsement by ESAL for any political candidates, businesses, or organizations mentioned herein.
Published: 12/9/20
Updated: 07/30/22

Interning for a State Representative
Neurobiologist Promotes Shared Governance to Relieve Education Inequities
Engaging the Public as a Museum Docent
Internet of Water: building data infrastructure one state at a time
Researching Mobile Crisis Services in Virginia
Cibolo Center for Conservation: Creating Community-Based Resource Stewardship
VaCS: Student-led COVID vaccine outreach
Developing a Data Pipeline for Virginia
Visiting the Office of the Mayor
‘Running for office takes a lot of guts’: 314 Action and the case for electing scientists to local government