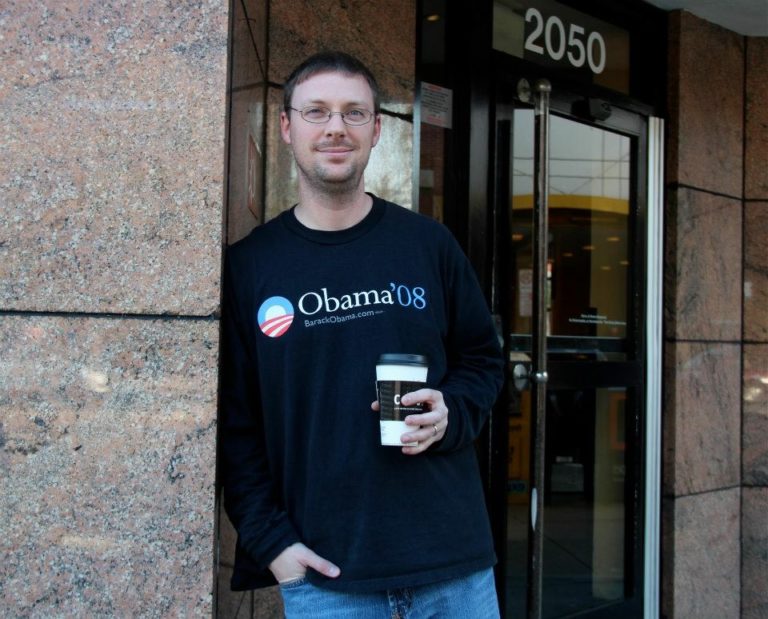 For someone trained as a computer scientist and a physicist, Dave Leichtman’s career headed in an unusual direction after graduate school. Harnessing a long-standing passion for politics, he shortly found himself contributing his skills to political campaigns. In 2013 he was elected as vice chair for technology and communications of the Democratic Party of Virginia, a volunteer position that provides support for candidates who are running in the state.

CS: What was the first spark that got you interested in community engagement?

Leichtman: My grandfather used to take me around in a pickup truck and introduce me to everybody within ten miles of the farm in Oklahoma. He knew everyone and wanted to make sure that I knew everyone. It was that notion of community and getting to know your neighbors, and then organizing around what was important to you. He actually ended up creating a water district for the area. It inspired me.

CS: How did you transition into being so involved in politics yourself?

Leichtman: In 1996, my friends and I created one of the first online university communities in the country at William & Mary. I actually left grad school to turn it into a business. Then Facebook came along and made all that irrelevant. I had always been politically active and had volunteered on a state senate campaign, so when I shut down my company in 2007 I was trying to figure out how to meld my interests and do political tech. I met some folks from Blue State Digital and eventually I became their liaison with the Obama campaign. I was helping to run technical systems for Obama and Blue State’s development shop.

Now I've been doing political tech for the last 12 years. I’d seen a lack of tech expertise in the volunteer force, so I helped build a tech volunteer group within Virginia. It’s basically tech-savvy Democrats doing tech work for other Democrats. Eventually I was encouraged to run for the state central committee here, which is the governing body of the state party. Five years ago I decided to run for vice chair, and now I hold that position. We have four vice chairs in Virginia, each with a different portfolio, and I’m the one who covers tech.

CS: What does the position involve?

Leichtman: A lot of what we do is matching volunteer talent with volunteer activities and, frankly, that's a lot of what is needed in the party right now. A campaign will come to me and say, hey, we need a new website, and I’ll go back to my group and try and find somebody who I think is the right person to work on the project, and match them up with a campaign.

For a lot of campaigns, I would say I’m like an ad hoc CTO. No individual campaign needs a full-time CTO, but if you need one for an hour or so, I can come work for you.

CS: How do you find volunteers?

Leichtman: It’s tricky – a lot of word of mouth and friends of friends. We’re now in competition with some of the larger groups. There are groups like Ragtag, which I would 100% recommend, that match volunteers to technical needs. They are now all the rave nationally, however those organizations also tend to get most of their volunteers from California, who then drop in on other states.

Finding local volunteers who can help locally is always preferred because they actually understand the needs and requirements of a local campaign. In national organizations, the volunteers tend to want to help in national Senate and House campaigns. They think they have to be on a swing Congressional seat in order to do something impactful. They don't realize that actually the city council and school board candidates are the ones who need the most help and that can be helped the most by volunteers.

CS: What advice do you have for scientists and engineers who are looking to get more engaged in their communities? How should they get started?

Leichtman: It could be something as simple as showing up at an event. There are so many activities available if you want to get involved. Every campaign does phone banking and door knocking. I think sometimes it's hard to figure out where to volunteer. Look up your local party committee and try to call them and talk to somebody there. Find out what they need.

A lot of the time folks who are in data and analytics say they want to do analytics for a campaign. That can be important in a big national campaign, but it's not as important to the local candidate. I know it sometimes sounds scary for people to get involved in a material way and talk to other people on behalf of a candidate. But that's what's really needed.

I do get it – you're busy, you've got a kid, you've got a job, you've got all these things. But it's actually easier than people realize. Once you get out there and start talking to people, you realize that it's actually not that hard to talk to your neighbors. I think we've retreated into the electronic world of our phones, and it's a high energy task to just go talk to people. But once you start doing it, you’ll see that you can have an impact.

Engineers & Scientists Acting Locally (ESAL) is a non-advocacy, non-political organization. The information in this post is for general informational purposes and does not imply an endorsement by ESAL for any political candidates, businesses, or organizations mentioned herein.
Published: 11/24/18
Updated: 07/9/22