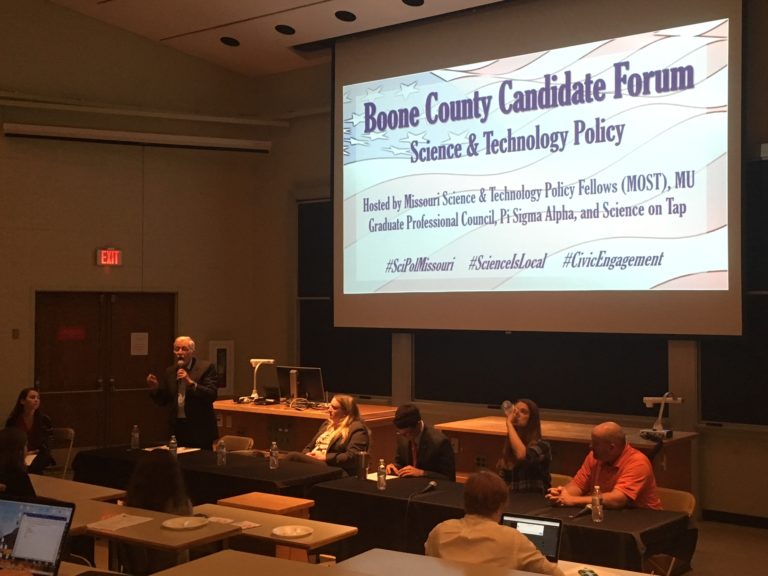 A county candidate forum hosted by MOST.
Our “Local STEM” series highlights local government and community initiatives and organizations in areas that relate to STEM.
Share this article

With reliably productive legislative sessions and the country’s fourth largest general assembly, the state of Missouri has a diverse set of science policy needs. The MOST Policy Initiative – a non-profit corporation started at the University of Missouri in 2016 and directed by Rachel Owen – connects scientists and policymakers during the development of new legislation. As part of the Initiative, Owen also runs the Missouri Science and Technology Policy Fellows Program that places Ph.D.-level scientists in the Missouri General Assembly to provide research and technical support for evidence-based policy decisions. Owen recently spoke to ESAL about MOST and its importance in Midwestern politics.

Owen: Missouri is a really diverse state, ecologically and culturally. We have large cities like Kansas City and St. Louis, with populations exceeding 3 million people, and a range of associated issues. We also have rural areas that have limited access to resources. Missouri is very proud of its abundant natural resources, so there's a lot of focus on water quality and maintaining our parks and tourism industry. And we also at the same time are trying to make sure that farmers can be successful. While we have robust biotech and research communities in the state, the relationship between scientists and policymakers has been inconsistent, especially at the state and local levels.

CK: Can you describe the main goals of the MOST Policy Initiative?

Owen: In realizing that there’s inconsistent access to science – meaning that some policymakers know scientists and can get in touch with researchers but others don’t – we want all our lawmakers to have the resources to incorporate research into policymaking. MOST aims to tackle this information gap from two angles. We’re trying to find out what policymakers need from science and when they need that information. And then we’re also trying to work with the state’s scientific community to make sure that we have the information available and that scientists understand how to present it to policymakers or community leaders. We consider ourselves to be a boundary-spanning organization that's working to fill the gap between policymakers, community leaders, decision makers, and the scientific community.

CK: Can you discuss your current priorities?

Owen: We have three priority areas, all working towards that same goal of facilitating an exchange of knowledge between policymakers and scientists. The first is working with policymakers and trying to make sure that they have information when they need it to make good evidence-based policy decisions. The project that's underneath that umbrella is our fellows program, the Missouri Science and Technology Policy Fellows. That's really where our organization started: trying to figure out how to place Ph.D.-level fellows at our state capitol to help inform the legislature. Starting next year, we'll place five legislative fellows who backgrounds in a range of different STEMM disciplines. They'll be assigned to a suite of committees and they will help answer questions from lawmakers.

CK: What about the second and third areas?

Owen: Our second priority is to equip scientists with skills to have conversations with community leaders and decision makers. For example, we will soon launch an initiative called the Local Science Engagement Network with the American Association for the Advancement of Science. We’re excited to partner with AAAS to recruit scientists from around the state and provide them capacity-building training so that they understand the policy making process better and know how to communicate effectively with community leaders in different parts of the state.

Our third priority area, which is a much less developed than the other two, is that we really hope to be a resource for the general public. There's abundant public trust in science in some parts of the state and a lack of public trust in science in other parts of the state. In order to make sure the science we share with legislators is also available to the general public, we are building relationships with media so that when we put together a science brief for a legislator, the media also gets that science brief.

CK: Tell us more about the fellowship program: what are you looking for in candidates and what kind of training will they receive?

Owen: We hope to recruit fellows who understand the research process and can talk about the nuances of the scientific method in a clear and simple manner. We spend so much time talking to legislators about the scientific method and how even though we don't have perfect information in many situations, science can still add information to the conversation. So even if we don't have the study that tells us exactly what policy A or policy B is going to result in, we still might be able to give information that would provide background and help them to make decisions.

We’ll have two weeks of training for fellows. One will be focused on what the legislative process looks like: who are the big players in Missouri policymaking? Who are the people they would interact with at the different stages of the policymaking process? We’ll also work on interpersonal science communication skills of how you talk about science differently depending on who you're talking to. We want them to be able to give brief, concise, unbiased messages about science. The other half of the training will help fellows feel comfortable with the state of Missouri and all the diversity of the state. We'll be touring different scientific facilities statewide. We'll visit larger cities such as Springfield and St. Louis, as well as smaller communities to give the fellows an idea of the people around the state who legislators are representing. We hope this will leave fellows with a better perspective when they're bringing science to the conversation in Jefferson City.

CK: What kind of impact do you envision MOST will have on the Missouri policy landscape?

Owen: A good measure of success would be that more legislators are coming to the fellows with questions and that the fellows are seen as a trusted source of science at the capitol, so that science is being added into the conversation. And then, possibly, I think that we could see bills that are drafted or written in a different way because we're able to provide scientific information to the conversation. We aren't there to lobby and we aren’t there to change specific legislation. We hope to institutionalize science as part of the decision-making process.

For more information on state-level policy fellowships, please see our Local STEM articles on the Eagleton Institute in New Jersey and the Connecticut Academy of Science and Engineering.

Engineers & Scientists Acting Locally (ESAL) is a non-advocacy, non-political organization. The information in this post is for general informational purposes and does not imply an endorsement by ESAL for any political candidates, businesses, or organizations mentioned herein.
Published: 12/8/19
Updated: 09/14/22