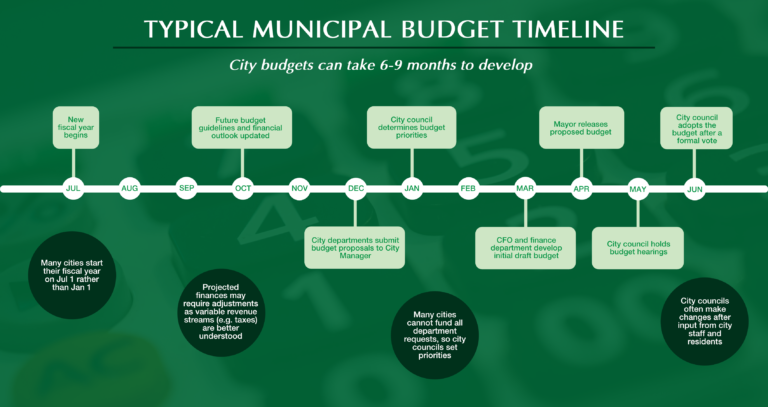 Delving into the nuances of municipal budgets should not be reserved for experts. With a little determination, paired with guidance, it can be a worthwhile experience that sheds light on local priorities and decision-making. This is the first in a series of three articles to help you understand and interpret local budgets. For additional articles in this series please see:

Since the Summer 2020 protests, I have felt shaken by the events that unfolded. I found myself wondering what my government has and has not done to promote justice and equity. I asked myself, how can I learn more about what my local government is doing about these issues?

When I started to look, I quickly realized that municipal budgets can be complex! A budget is arguably one of the most important documents a government produces -- it is a way for the government to communicate with their constituents. Think of it as the municipal government's “report card” to the community.

To better understand how to interpret a municipal budget, there are a few key fundamentals to know about:

Municipal Government Revenue
A large portion of the money available to a city government derives from property and sales taxes. These funds typically have the fewest restrictions on how they can be used. City governments also derive revenue from other sources such as transfers from the federal government and service fees, though these funds often have more restrictions on what programs and initiatives they can be spent on. This primer provides more details on a municipal government’s sources of revenue.

For each of the different sources of revenue, municipal governments will have different types of funds. These can include general funds, special revenue funds, enterprise funds, and permanent funds. You can read more about the restrictions assigned to each type of fund in this handbook constructed by the Wyoming Association of Municipalities.

Municipal Government Expenditures
A budget must contain proposals for any governmental expenditure, meaning anything that the government plans to spend money on. The types of things that city governments spend funds on include public safety and policing, social services, public works and infrastructure, and parks and recreation. K-12 education also represents a significant local government expenditure, though school districts typically operate independent of municipal governments. This backgrounder from the Urban Institute provides more information about how state and local governments, including city governments, expend their funds.

Budget Development Process
The process of developing a municipal government budget takes around six to nine months from start to finish. Unlike the calendar year that begins in January and ends in December, governments often follow a fiscal year -- a 12-month period the government uses for accounting purposes, that begins and ends differently. In the US, cities and states often have a fiscal year that starts on July 1st and ends on June 30th of the following calendar year, such that fiscal year 2022 begins on July 1, 2021 and ends on June 30, 2022. Fiscal years are typically abbreviated such that fiscal year 2022 would be written as FY 21-22 or just FY 22.

For a fiscal year that starts on July 1, the budget development process may begin as early as the fall of the previous year. Under the direction of the city manager, the city staff will propose a spending plan for the upcoming fiscal year. The drafted budget will eventually be sent to the local legislative body such as a city council for inspection, and there will typically be a period for public comment. Ultimately, in May or June, the city council will vote to adopt the budget for the fiscal year that will start in July. I recommend this document published by the City of Richmond, Calif. for an overview of a municipal budgeting process.

Budget Presentation
To best interpret your city’s budget, it can be helpful to understand what presentation format is being used and what type of information that format conveys. To present how tax dollars are being spent, the government has a few options. The most common format is "Line-Item." Line-Item is a budget style that groups financial statement items row-wise by category, and it often includes data from previous budgeting periods. Another format used is “Program Budgets." This format focuses more on goal-setting and includes a catalog of both expenses and revenue contributing to a specified program. This explainer from the University of Tennessee provides an overview of budget presentation.

Once you understand some of the fundamentals of city budgeting, the question of how budgets can help you get more informed and engaged locally remains. The first place to start is usually your city’s website. Most jurisdictions publish current and previous budgets online. In addition, you can often also find accessible recordings of public meetings where budgets were discussed, minutes from past public meetings, and staff reports summarizing information that was presented to city council. (For a quick overview of the wealth of information that is available on local government websites, check out ESAL’s Digital Roadmap to Your Local Government.) Another way to get involved is to subscribe to your city’s newsletter and email listserv, so that you can be informed about public meetings, especially those relating to the budget. As part of the approval process, cities are often required to share proposed budget plans with the public, so public engagement is critical!

I took a look at the proposed FY 21-22 and FY 22-23 budget for the City and County of San Francisco budget proposal to see what information I could gather. One of the first things I noticed is how the table of contents is clearly organized by department. So, if you were specifically interested in how much funding was allocated to the Police Department in FY 22-23, for example, it would be easy to find. I learned that the proposed FY 22-23 budget included a $27,421,668 increase for the police department, compared to FY 21-22 budget.

When I looked into the details for Police Department funding, I was pleasantly surprised by the presentation of information. There was a balanced combination of colorful graphics and explanatory text. Besides a clearly labeled comparison of police funding over the past few fiscal years, there were also detailed goals and recent performance measures available to the public. Important issues like officer training and gun violence were also explicitly mentioned alongside facts and figures.

Example of supporting information about the Police Department from the City of San Francisco proposed FY 21-22 and FY 22-23 budget.

Overall, this proposed budget document felt accessible to the general public. It uses the power of visualization and avoids overwhelming amounts of data so issues and solutions are the emphasis.

The more time I spent getting acquainted with my municipal budget, the more I began to appreciate the similarities between city management and the scientific process. Both hinge on collaboration and flexibility. Much like a scientific publication must be thorough and interpretable in presenting methods and results, a municipal budget must be thorough and interpretable in presenting a year’s worth of fiscal decisions. Overall, I’ve learned that municipal budgets are easier to understand and much more informative than they may appear at first glance.

Budget
Engineers & Scientists Acting Locally (ESAL) is a non-advocacy, non-political organization. The information in this post is for general informational purposes and does not imply an endorsement by ESAL for any political candidates, businesses, or organizations mentioned herein.
Published: 09/8/21
Updated: 06/9/22